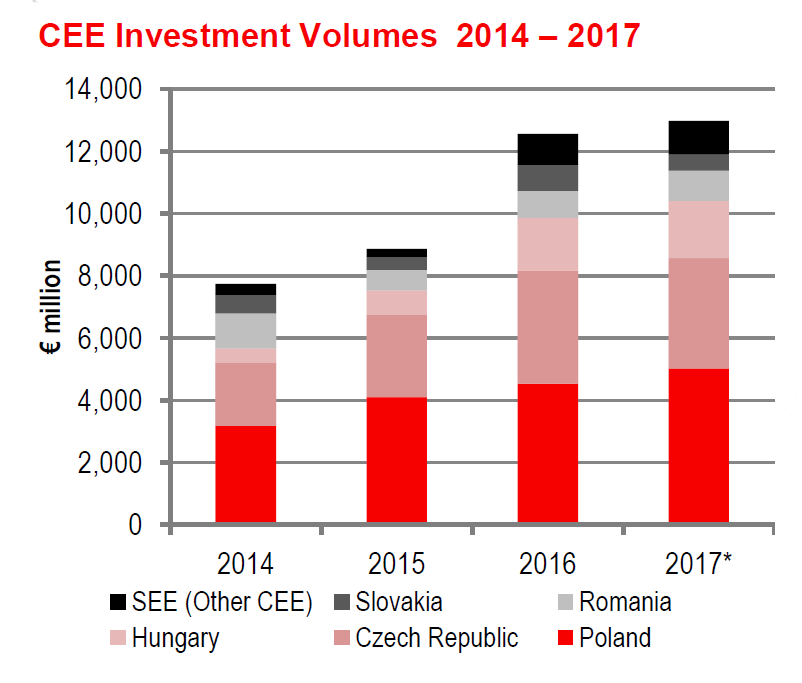 Out of the 25 individual deals closed in 2017, industrial transactions topped the number of transactions and investment volume, followed equally by offices and retail. Only two deals were part of a portfolio and a quarter of the transactions were acquired by domestic entities.

The total investment volume in Slovakia for 2017 was recorded at just under €525 million, with more than two thirds being closed in the second half of the year. The volume is below our €600 million estimate as several deals did not close before the year end and will slip into 2018.

The overall attractiveness of the investment market is boosted by increased demand from local as well as international investors, looking at wide range of risk levels. Slovakia does not currently provide many opportunities of prime quality and core risk profile as these have been mostly traded in recent past. On the other hand there is availability of higher-yielding subprime properties that have not been already traded in this property cycle. Investors are currently looking at A-class value-add industrial assets, B-class retail assets in secondary and tertiary locations as well as core+ and value add office opportunities in Bratislava.

Rudolf Nemec, Senior Investment Analyst at JLL Slovakia, said, “From an occupational perspective, Slovakia is enjoying a positive evolution of market conditions in both, industrial as well as office markets with low vacancy levels and healthy development pipeline, resulting in stable to increasing headline rents and reasonable incentives. This positive trend is key to any investment activity.”

Four new investors
The industrial sector was once again the most active with four new investors entering Slovak market. Logistics Park Galanta- Gan, sold by Prologis and acquired by CNIC, was the largest single asset industrial transaction ever closed in CEE both by investment volume and leasable area (240,000 sqm). Another significant deal included GLL’s acquisition of Amazon’s return centre in Sered, Western Slovakia; a 60,000 sqm prime asset which set a new price benchmark for Slovakia. Other notable transactions included the sale of LogCenter Nove Mesto – part of a large platform deal – acquired by China Investment Corporation (CIC) and Karimpol’s sale of Logistics Park Senec to Palmira.

Still popular
The retail sector is experiencing strong investor interest for both prime shopping centers as well as smaller regional schemes across the country, despite the limited availability of product. In 2017, the KLM Real Estate Fund of Prva Penzijna, the real estate asset management branch of Postova Banka, increased its exposure to the retail sector through the acquisition of several retail warehouses across secondary Slovak cities, as well as through the forward funding of the newly constructed edge-of-town Eperia shopping centre, a 20,000 sqm retail scheme of regional importance in Presov City, Eastern Slovakia.

The office sector in Bratislava is experiencing increased interest from investors, although H2 2017 only saw the sale of Western Tower from CTP to Wood&Co. and the acquisition of Reding Tower II by Israeli capital. Both buildings are below 10,000 sqm GLA and are located in non-core office locations in the outer city belt. Mid-sized and larger transactions will close in H1 2018.

“For 2018, we expect the total investment volume to reach a level of the €650 million. The record Slovak investment volume (ca. €850 million in 2016) could be targeted in case one or two large trophy assets are traded. However, the total number of deals is likely to be similar as in previous year, a result of market liquidity and rise in transparency.” added Nemec.

Yields
Our views on prime yields for Q1 2018 are as follows: Offices 6.50 percent, Retail warehouses 7.50 percent, Shopping centers 6.00 percent, High Street at 7.00 percent, Industrial and logistics with a standard WAULT of 3-5 years at 7.50 percent and prime hotels (operations) in the capital at 7.25 percent.

Record breaking CEE region
At ca. €12.98 billion, 2017 recorded a 3.3 percent increase over 2016 (€12.56 billion) and for the second year running set a new record transaction volume for the CEE region. We have registered continued appetite from investors for the full range of assets across the entire region. The full year breakdown saw Poland and the Czech Republic each record new second best ever volumes with a regional share of 39 percent and 27 percent respectively. These were followed by Hungary (14 percent), Romania (8 percent) SEE markets (8 percent) and Slovakia (4 percent).

With a solid pipeline of transactions set for 2018, we expect another strong year. Our forecast for the full year suggests CEE regional volumes will reach in excess of ca. €12.0 billion, which could again challenge the new record set in 2017. 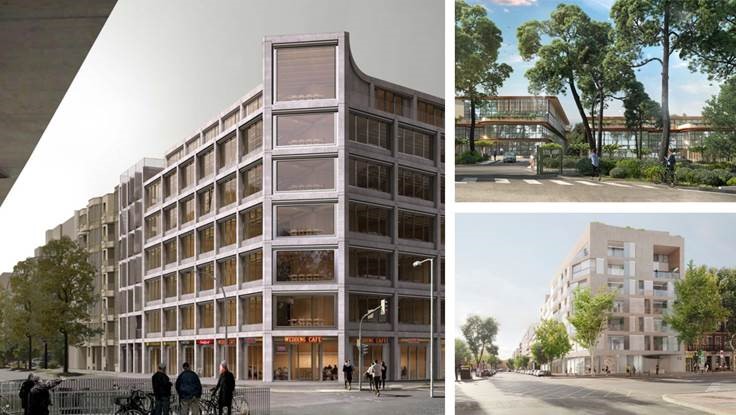 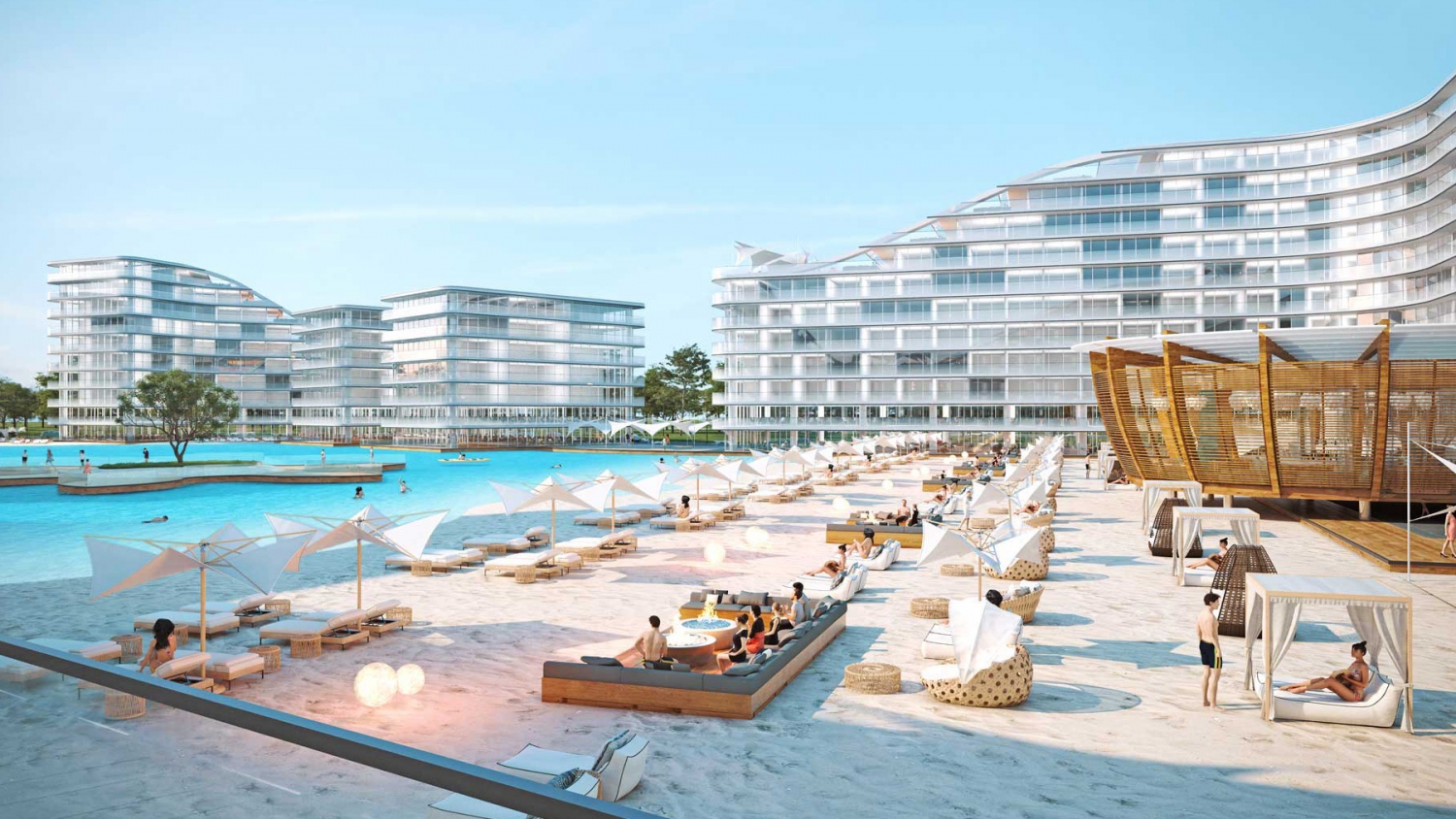