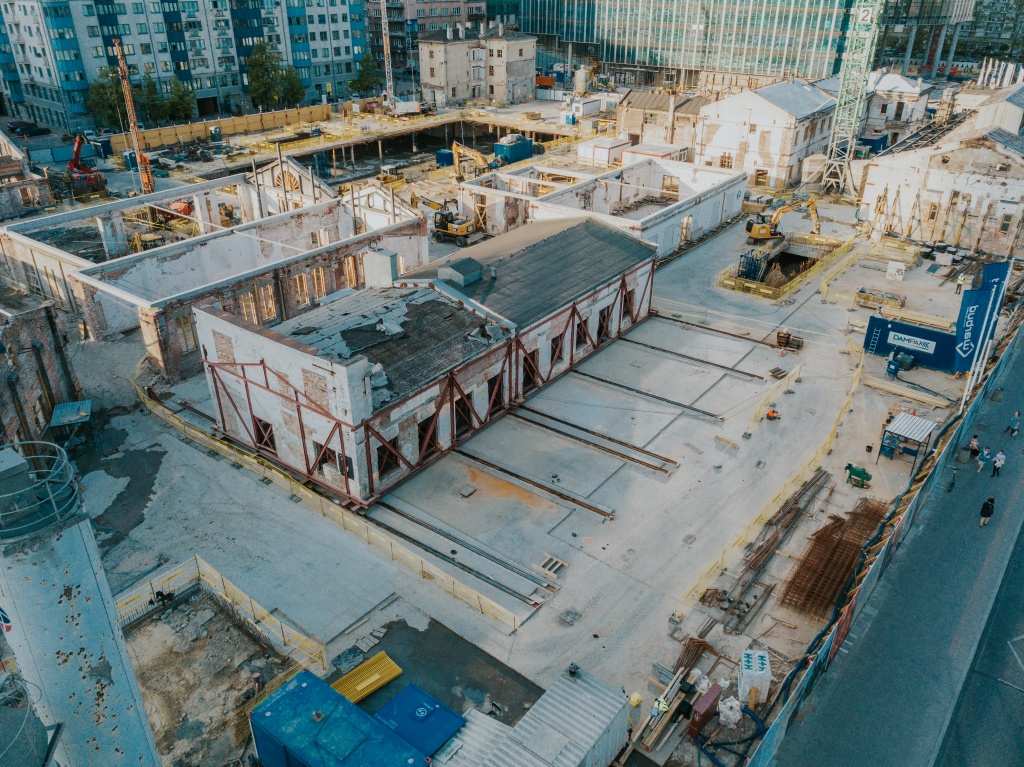 The revitalization and construction works on the two-hectare site of the former Norblin factory are in full swing. Before building over-ground structures in the complex, most of the specialist works are being carried out, including such processes as building an underground 4-storey car park and securing 9 historic buildings. In November last year, a 900-ton building was moved by 15 meters, and last weekend it returned to its previous location. Another two historic objects were lifted about a meter above the ground, in order to make a concrete ceiling below them, over the underground part of the building.

The operation of relocating one of the buildings of the former Norblin factory lasted five months. During this period, after moving the building, diaphragm walls up to a depth of 32 meters were made in its vicinity. On 26.04 the process of moving the building back to its original location began. The building has been pulled along eight previously prepared sliding beams, by means of actuators and high strength bars mounted to them. In the entire process it was necessary to use a hydraulic system consisting of six actuators (each with a force of about 56 tons) and a 700 bar hydraulic pump, as well as auxiliary measuring devices. Now the building has returned to its final destination, standing now on a reinforced concrete ceiling placed over the underground part of the building.

Another interesting process was lifting two buildings with a total weight of about 750 tons. The larger object of the two – a former mechanical laboratory – is located in the second line of the buildings, viewed from Prosta Street. This is a relic of the Luckfield and Henniger factory building, fragmented during the war in 1944. After the war, it was not restored to its original form, but it was divided into three segments. It has been entered into the Register of Monuments of the Mazovian Province Monument Conservator. The second building, dating back to the second half of the nineteenth century, located at the back of the laboratory, is a former hardening plant, also entered into the register of the Mazovian Monument Conservator. Both buildings were based on 64 micropiles with a diameter of approx. 35 cm and a length of 8 to 13 meters. Each of the micropiles was reinforced with a steel beam. Steel cap with a total weight of 24 tons was made at the base of the walls, in order to support them.

This operation required employing several specialist companies and lasted 11 months. The  micropiles were made by the company Soletanche, with the use of specialist drilling rigs. The company Dampak, which moved the building, was also responsible for the total scope of securing buildings, braces, tie rods and steel caps necessary to support the structures. Warbud, the main contractor, took care of reinforced concrete rims on buildings, other reinforced concrete structures, making a ceiling under the building and filling up the walls between the new ceiling and the old walls. After connecting the old walls of the building with the new ceiling slab, the entire steel structure needed to lift the building will be cut off and dismantled. Similarly, all 64 micropiles that are mounted in the ground below the foundation of buildings will be cut off from the ceiling base. Then, the entire building will be restored and prepared for use.

“The works we carried out on three historic buildings, such as moving and lifting them, are extremely interesting construction processes, which require not only vast experience and precision, but also interdisciplinary cooperation of many specialists from various fields. These processes have been successfully completed and now we are going to focus on the next stages,” commented Sylwia Filewicz, Head of Development & Construction, Capital Park Group.

The revitalization of the former Norblin factory is the flagship project of Capital Park Group. A two-hectare site of the historical Norblin, Buch Brothers and T. Werner factory in Warsaw’s Wola district between Prosta, Łucka and Żelazna streets will be given new functions. A mini-district will be built there, consisting of several buildings and internal streets. The investment will accommodate over 66,000 sqm of the usable area, including 40,000 sqm of office space and over 26,000 sqm adapted as the space for shopping, services, leisure, culture and food.

This space will include such tenants, as a cinema OH! Kino (3,300 sqm), which will be launched in a new, exclusive concept on the Polish market, and BioBazar (2,000 sqm) – the first certified market with eco food and organic products in Poland. The buildings will be equipped with a number of eco-friendly solutions – the project was pre-certified with BREEAM “Very Good” rating in the design phase. For convenience of the visitors and workers of the complex, a 4-level underground parking with 750 car parking spaces and 200 dedicated places for bikes will be provided.

One of the main attractions of the project, directly related to the heritage of the place, will be the Open Museum of the Former Norblin Factory, which will hold such exhibitions as unique collections of plated goods or renovated historical factory machines. During the revitalization works, 9 buildings of conservation concern, 2 historical buildings and 50 machines and appliances belonging to the former factory will be renovated. The new complex will be an open space, accessible to everyone – employees and visitors, Warsaw inhabitants, as well as tourists.

Capital Park Group is the investor and initiator of revitalization of the former Norblin factory. The company PRC Architekci is responsible for preparation of the design. Warbud SA is the main contractor of the project, in cooperation with such companies, as Soletanche Polska, Maat4 and TKT Engineering.