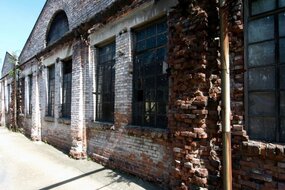 A history worth 87 pln million – EuropaProperty

Completion of all construction works within the revitalization project of the former Norblin factory in Warsaw’s Wola district is planned for the turn of the first and second quarter of 2021. While it is easy to observe the progress at construction sites of new Warsaw’s skyscrapers, very special things, but difficult to see with the naked eye, are happening at the former factory site at Żelazna street. These processes include, for example, protecting historic buildings, dismantling machinery and historical elements, and carrying out unusual construction operations. The project investor – Capital Park Group – will spend a total of nearly 87 million PLN on the works regarding all the monuments in the factory, and in the key phase the team dedicated to these operations will consist of 100 people.

The value of general construction works on monuments (including construction of walls, ceilings, external and internal partitions, etc.) in the area of the investment is PLN 35.5 million. The conservation works alone will cost PLN 21 million. The maintenance of historic machines, historic rail tracks and cast iron floors, which will decorate the interior passages, will amount to almost PLN 11 million. Another 14.5 million is the cost of mounting protections, foundations and carrying out unusual construction operations: moving and lifting historic buildings. Over 5 million PLN will be allocated to the restoration of the factory equipment elements that are not listed in the monuments register, but due to their historical value, were secured by the investor during the preparatory works. This equipment contains about 380 elements that will be displayed in the revitalized complex, including, for example, such objects as the base of the forge furnace chimney made of brick, dated back to the late 19thcentury, the entrance gate of the Norblin Villa, elements of window woodwork and joinery, as well as factory information plates. Visitors to the future complex will also have the opportunity to see the collection of over 600 plated goods worth around 100,000 PLN, which were purchased by the investor from a private collector and will be displayed in the area of a renovated factory.

“Revitalization is a complex process, constantly surprising with new challenges, and the cost of such an investment can be even several percent higher than the construction of a new building. However, the great value that is brought by such project, that is – restoring the splendor of the former Norblin, Buch Brothers and T. Werner Factory and giving it a new, vibrant life – is worth every zloty and all the time devoted to it,” says Kinga Nowakowska,Operational Director and the Management Board Member in Capital Park Group.

There are nine buildings of conservation concern and one historic building in the area of the former Norblin factory in Warsaw’s Wola district. The eleventh building, formerly used as a 520-ton press hall and pipe plant no. 1, due to its poor technical condition, caused by some past construction works, such as reducing it twice during widening of Prosta street, had to be demolished. However, in cooperation with the monument conservator, it will be rebuilt with respect to its historical form. The legacy of the historic factory comprises also almost 50 machines and factory equipment elements with a total weight of 825 tons. 42 of them are entered in the register of monuments.

A team of 25 people, including 10 monument conservators, participated in securing buildings, as well as in dismantling and transporting machines from factory areas to specialist workshops. In the phase of conservation works, which will start as early as September this year, the team of experts in this field will be expanded by another 75 people. Monument works are coordinated and carried out by Monument Service, the company experienced in this type of projects across the whole country. The company realized such projects, as the comprehensive renovation of the so-called Dekert Side of the Old Town Square in Warsaw, the Water Tower in Warsaw’s Łazienki Park, the High Castle church in Malbork and the famous figure of the Saint Mary of Malbork. The employees of this company are responsible for both training other entities conducting works on the monuments of Norblin, and also belong to the so-called investor’s conservation supervision team, which ensures that all revitalization works are carried out as planned.

After the revitalization, the history of the Norblin, Buch Brothers and T. Werner factory will be presented in the form of the Open Museum of the Former Norblin Factory. The exhibits will be primarily the monuments of the former factory – both post-industrial halls, as well as the preserved technological line. The museum tour will be organized in four multimedia paths: People, Architecture and Buildings, Machines and Devices and Products. Each of them will have several options: for children, for the first time visitors, and for those who came to broaden their knowledge. The museum will have unique character thanks to its openness – understood as an open exhibition space, but also as openness to the needs and interests of visitors. The museum space will be spread throughout the entire complex, and visitors will be able to decide independently which path and sightseeing option are most interesting for them.

In the first half of 2021, an open multi-functional minidistrict, with over 66,000 sqm of usable area, will be opened on a two-hectare site in Warsaw’s Wola district. The office area will comprise 40,000 sqm, and the remaining over 26,000 sqm will be devoted to unique retail and leisure concepts, such as the iconic Bio Bazar – the first market in Poland with organic, certified food, OH Kino with the first boutique cinema concept in Warsaw, exclusively available fashion boutiques and wellness zone. An important element of the new complex will also be a food hall with various food concepts and numerous cafes and restaurants, as well as a piano bar with live music.

Capital Park Group is the investor and originator of the revitalization of the former Norblin factory. PRC Architekci studio is responsible for the architectural design. Warbud SA is the general contractor, cooperating with such companies as Soletanche Polska, Maat4 and TKT Engineering.