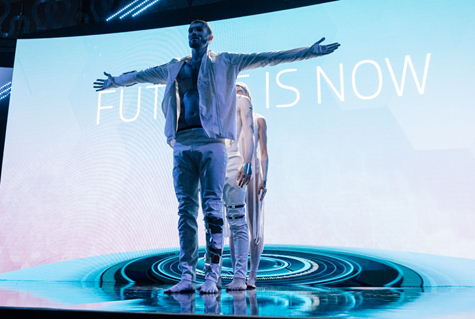 A new tech revolution is about to transform the world and business needs to be ready, according to speakers at ‘P3 Conference 2017: Future Now’ – EuropaProperty

Logistics real estate investor and developer P3’s influential “Future Now” conference took place in Prague on Thursday 12 October 2017. P3 brought together leading speakers from the likes of Amazon, Uber and IBM as well as Cranfield University’s highly regarded School of Management and cutting edge new tech start-ups to explore how technology is set to transform the world in which we live in the very near future. It highlighted the need for businesses to adopt new technologies as a matter of urgency or they will fail and disappear.

A poll of delegates showed that only 27 percent of businesses had already introduced AI or were planning to in the next 12 months. A surprising 38 percent only expected to introduce AI over the next 5 years, and 10 percent said they never would. P3 CEO Ian Worboys said, “The future is coming – not in five or 10 years, but the next 12 to 18 months,” as he challenged delegates to engage with new technologies sooner rather than later or face extinction.

Conference speakers proclaimed us to be on the eve of a dramatic and potentially highly disruptive revolution with a host of new technologies – from driverless cars, trucks, ships and even airplanes to AI-based recruitment becoming commonplace within the next year or so. At the same time, the audience of 170+ supply chain & ecommerce executives heard about the rise of the sharing economy concepts like Uber serving a new generation of consumers that are less concerned with ownership of than access to things plus a major shift in European socio-demographics. Together these trends are set to change the way we live as well as how, what and where we consume products and services within the next few years.

Keynote speaker, near-futurist Sean Culey, Vice President of Manucore, set the tone at the start of the day explaining that we are at the transition point between the 5th and 6th wave of “creative destruction,” with the old ways of working coming to an end and the next phase based around technology just starting to evolve. This is part of a cycle, but for perhaps the first time, it is happening across every industry and every sector all at the same time. We are entering a potentially hugely disruptive period for business, but – according to Culey, the fundamentals will still apply. The customer will remain king and tech should be used to enable businesses to move to more customer-centric models, where the emphasis is on solving a customers’ problem not selling him a product or service. Creativity, empathy, intuition and entrepreneurship will be the key skill requirements for the future he said.

The consumer is also changing according to research presented by Professor Michael Bourlakis of the Cranfield School of Management. By 2020, the average European consumer will be older, with a higher life expectancy but decreasing fertility and below average purchasing power; poorer and more focussed on purchasing in smaller quantities, value for money and fewer impulse buys; living in smaller family groups and in smaller houses with less storage, less likely to do one big weekly shop; more concerned about the environment, sustainability and social responsibility; and more educated, connected and informed – full time shoppers with a right here, right now approach. This has major implications for all of the businesses in the supply chain from raw materials suppliers to retailers.

• VasiPhilomin, Head of Machine Learning & AI at Amazon, who explained how putting the customer at the heart of the company’s philosophy has directly resulted in itsindustry-leading development of new technologies which has put it at the forefront of voice-based intelligent applications designed to make life easier while also making AI functionality available to every programme and app developer in the world, rather than just a select few, fuelling an explosion in its use just around the corner.

• Roland Werner of UBER, who explained how its hugely popular car sharing concept is complementing public transport to provide services to previously “under-served” areas of many cities, increasing social mobility by improving physical mobility, while also being having environmental benefits of reducing private car use. He also introduced the audience to newer services such as carpooling (shared trips) to reduce costs and environmental impact further, as well as Uber Eat, Uber Freight, Uber Rush and the very exciting Uber Air concept.

• Tom Self of What3Words discussed providing an efficient, accurate addressing system, particularly useful in parts of the world that have previously had inadequate or no addressing systems, opening them up to many humanitarian and social benefits – from being able to summon an ambulance to being able to register to vote – as well as facilitating the growth of ecommerce in all parts of the world.

• Martin Harris of IBM Watson IoT Europe, who spoke about the evolution from smart to truly cognitive buildings which use self-learning tech to optimise space and energy consumption, improve staff productivity and structure predictive maintenance, while Aneta Kilmova of Spaceti talked about a new smart digital building interface.

• Achim Taylor of POST Luxembourg charted how his company can transform itself from a government-owned national postal company facing falling use of its core service into an ecommerce logistics provider, aiming to focus European distribution flows through the Grand Duchy. It’s an excellent example of how a traditional company can embrace transformational change, identifying existing strengths and exploiting them to create new markets.

• Filip Hrkal, COO, Cut-e CEE explained how AI can support recruitment and personnel development. Recruiters & candidates should welcome, rather than fear, the growing place robots as part of the workplace recruitment team, he said. Tech can unlock accurate, objective human potential identification, carrying out the administrative procedures & tasks, allowing human recruiters to concentrate on key aspects of the hiring process such as ‘human values’ of emotion, empathy & expertise as well as strategy.

• Andre Dravecky, CEO, ShipVio, who has created a platform that connects small and medium-sized businesses directly with shippers to utilise the massive unused capacity in logistics vehicles that are travelling across the EU– some 47 percent of total truck load is empty, equating to €130 billion loss pa and waste of 400 million tons of C02. Making use of this capacity has financial and environmental benefits, which will come even more into focus with automated freight vehicles that can work 24/7.

Concluding the P3 Conference Ian Worboys said, “The future is here. Some of the change is scary, some of it is exciting – all of it presents an opportunity. My hope is that the P3 Conference has given you food for thought to take back to your own businesses to prepare to take advantage of what’s coming.

“We are much more than just a developer of logistics parks; we are part of the logistics industry and that makes us part of the wider supply chain, we understand the trends and issues that affect our customers, and want to help them prepare for the changes that are fast approaching and, in some cases, are already here. The P3 Conference is part of this approach. It allows our customers and their peers to benefit from meeting and learning from each other, networking and exchanging information and experience. It is proof that P3 doesn’t just talk the talk. We really are working, side-by-side with our customers and industry colleagues to identify the business trends that matter, so that we can develop buildings that they need now and in the future.”