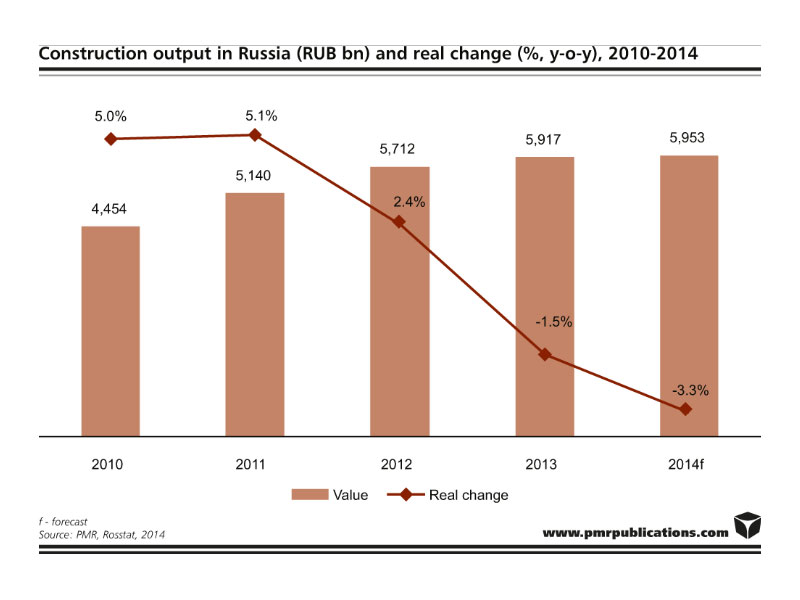 Since 2012, the Russian construction industry has witnessed a considerable slowdown. As indicated by the results of PMR’s latest report, entitled “Construction sector in Russia H2 2014. Development forecasts for 2015-2020”, Russian construction output contracted by 1.5 percent year on year in 2013, after the 2.4 percent expansion achieved a year before. Furthermore, during the first eight months of 2014 the downward trend continued in the industry, with a 3.1 percent year-on-year contraction.

Among the key factors contributing to the decline in construction activity in the last few years was the modest economic growth, with the GDP growth rate falling to 1.3 percent in 2013 from 3.4 percent a year earlier and expected to increase by only 0.3-0.5 percent in 2014. Another deterring factor has been the lack of growth in fixed capital investments, which underwent a 0.2 percent year-on-year decline in 2013, with a more severe contraction (-2.8 percent) in the first half of 2014.

The reduction in fixed capital investments in 2014 was caused in part by the government’s decision to freeze regulated utility prices and tariffs for railway transportation services in 2014. As a result, natural gas, electricity and rail companies were forced to scale back projected revenues for 2014, thus furthering a reduction in capital investments this year. In addition, the recently approved sanctions against Russia and the country’s retaliatory ban on some food imports have also contributed to deterioration in construction activity in Russia, although the negative effect was limited during the first eight months of 2014. Fixed capital investments underwent a contraction of 4.8 percent year on year in Q1 2014, with the first sanctions against Russia being imposed in March, and “only” a 1.4 percent fall in the second quarter. It should be noted that the base effect contributed only marginally in the second quarter (a 0.1 percent year-on-year increase in Q1 2013 and a 1.2 percent reduction in Q2 2013). In addition, the decline in construction output was reined in to 2.6 percent in H1 2014, from 3.6 percent in the first quarter.

According to PMR, the full-year figures are not expected to notably improve, taking into account the recently approved sanctions against Russia’s oil and banking sectors. The declines were much worse in real terms, taking into account that the CPI totalled 7 percent in H1 2014, whereas the construction output index reached 4.4 percent. Moreover, in 2014 the RZhD’s investment budget for infrastructure projects is expected to fall 15 percent short of the figure seen last year and the total value of regional road funds is expected to be approximately RUB 338 billion (€7 billion) this year, which is 22 percent less in nominal comparison than the 2013 result.

In recent years, the non-residential section of the construction industry has been improving constantly. 19,035 non-residential buildings were activated in Russia in 2013, 3.8 percent more than a year earlier. Strong growth rates were recorded in total area and total volume of new non-residential supply last year. Total new space supply exceeded that of 2012 by over 9 percent. The positive trend continued in the first half of 2014. Preliminary data show that 7,339 non-residential buildings were commissioned in Russia during the first six months of the year, exceeding by 19 percent the number recorded a year earlier. The total floor space of new buildings increased by almost 12 percent year on year. At the same time, however, new projects were 6.5 percent smaller on average.

There has been a significant increase in the amount of housing completed in Russia in recent years, almost reaching the all-time annual completion level of 72.8 million sqm recorded in 1987. Taking into account the fact that 70.5 million sqm of housing space was commissioned in Russia in 2013 and promising growth rates recorded during the first eight months of the year, there are expectations that the total housing space commissioned across the country in 2014 will exceed the record high annual completion level.

Even though the 28.2 percent y-o-y growth rate in housing construction for the first eight months of 2014 suggests an annual figure in excess of 90 million sqm, it is difficult to see that actually being achieved this year, given the slowdown in the Russian construction sector and the economy as a whole. According to PMR, around 70 million sqm of housing space is expected to be activated across the country this year.