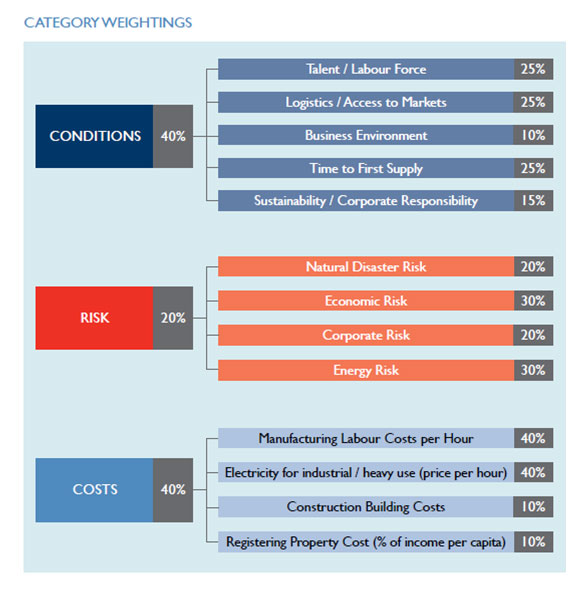 The Manufacturing Index 2014 assesses factors likely to affect the successful operation of production facilities in the 30 countries with the largest manufacturing output, as defined by UNCTAD (United Nations Trade and Investment).

The primary aim of the ranking is to illustrate what parameters manufacturers need to consider when evaluating the most suitable locations to expand or relocate.

In the report, three principal areas – costs, risks and conditions – are analysed and broken down again into more than 30 sub-categories. Factors including logistics; the likelihood of natural disaster; economic risk; and energy and labour costs are all taken into consideration and individually weighted to create an illustration for comparison.

The index takes the example of a company with highly mechanised operations, which generally requires unskilled labour, operating within a multi-regional market for a single finished product. These types of companies typically target a growing urban population and consider sustainability to be an important factor.

Malaysia scores particularly well in the costs and risks categories, justifying its position at the top of the ranking; the country is one of the least expensive locations within the index. Meanwhile, Taiwan places second with South Korea in third and Thailand in fourth.

The largest manufacturing country in the world, China, is well positioned in fifth overall, performing strongly in terms of costs, but the nation falls short of the top spot due to its weak score in the risk category.

Cushman & Wakefield’s Richard Middleton, Executive Managing Director, Asia Pacific, Corporate Occupier & Investor Services, said: “Asia Pacific continues to be at the forefront of the global manufacturing sector – and this is highlighted by the top five countries in the index all being located in the region. Furthermore, locations such as Vietnam and the Philippines are also anticipated to emerge over the next few years as notable manufacturing destinations.”

The highest-ranking country from the Americas is Canada in sixth place. However, this was largely due to its position as the least risky location of all of the 30 countries surveyed. The US and Mexico also ranked highly in the table, finishing ninth and 10th respectively.

Mark Wanic, Head of Occupier Services in the Americas at Cushman & Wakefield, said: “The Americas account for almost a third of the top 10 positions in this year’s index, which is testament to the draw of the region for global manufacturers. Manufacturing continues to expand in the US and this will help to drive the wider region forward in terms of growth.”

From an EMEA perspective, Russia and Turkey led the way in seventh and 11th position respectively. Turkey in particular is a developing location in terms of manufacturing and there are a growing number of companies choosing to locate there.

“The EMEA region is home to a variety of manufacturing companies from many different sectors and it is well positioned to grow over the next year or so. We have seen corporate interest in locations such as Turkey but also traditional production areas such as those in Central Europe and Germany remain sought after,” said Simon O’Reilly, Cushman & Wakefield’s Head of Account Management, Corporate Occupier & Investor Services EMEA.

“Being ranked 13th out of a list of 30 countries which also includes manufacturing powerhouses such as China, India and the USA is a great success for Poland which has dominated the Central and Eastern European region, excluding Russia, in regards to attracting new manufacturing operations being established by foreign companies. Furthermore, being ranked 4th across the whole of EMEA proves that Poland has the right business fundamentals in place, is perceived as a safe long term location which is and will continue to attract new foreign direct investment in the coming years,” said Tom Listowski, Partner, Head of the Industrial department in Poland & CEE Corporate Relations at Cushman & Wakefield.