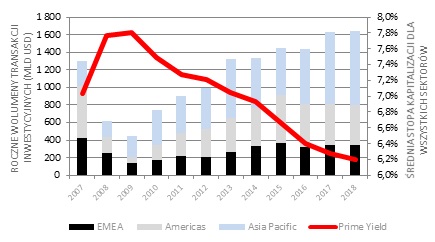 The Global Investment Atlas 2018 – launched at MIPIM by Cushman & Wakefield – reviews international investment patterns from 2017 and anticipates market performance for the year ahead. The latest iteration of the report, published annually, shows the highest level of real estate investment on record with a total of US$1.62 trillion compared to US$1.43 trillion in 2016 and anticipates a further improvement in 2018.

Asian investors were the major driving force behind these record levels of real estate investment, with money from the region accounting for more than half of all capital deployed and 46 percent of all cross-border activity. What is more, with the range of sources of capital within the region still increasing, this is likely to signal a period of sustained dominance.
According to the report, global investors from APAC increased their exposure to most markets, with the US a notable exception as a range of factors including the stage of the market cycle, uncertainty over US policies and domestic capital controls in China, all combined to deliver a fall in activity.

North America’s loss was Europe’s gain however, as investment from Asian sources grew by 96 percent y/y – primarily a result of several very large-scale transactions, including platform acquisitions marking steps towards the implementation of China’s Belt and Road Initiative.

Contrary to the conviction of some that European and American populism would result in a less adventurous investment community and a strengthening of domestic purchasing, local buying in both Europe and North America decreased on the year with the global increase in domestic investment driven exclusively by home buyers in Asia Pacific (+39.9 percent y/y).
The US remains the main target for international investors but its lead has fallen and regionally, Europe was strongly ahead, attracting 50 percent of all cross-border spending. At a city level, London persisted as the most sought after destination for international capital as concerns over Brexit were mollified by faith in the city’s long term appeal as well as a decline in Sterling, with affordability in the city proving too tempting for many cross-border investors.

Carlo Barel di Sant’Albano, Chief Executive of Cushman & Wakefield’s Global Capital Markets & Investor Services business, said: “Global real estate performed exceptionally well in 2017 with volumes up sharply and increasing valuations. This has provided good momentum going into 2018 and the balance of pricing, supply and demand all point to a further healthy year. Indeed, while stock is hard to find, we are forecasting a small gain in global volumes thanks to more development, an increase in profit taking and more corporate activity.”

Looking regionally, patterns of investment into Europe and the Middle East diverged last year with the former experiencing the third strongest year on record whilst volumes in the latter hit their lowest since 2012. Political turmoil in the Middle East clearly affected sentiment there, whilst Europe was widely acknowledged to have experienced its healthiest economic performance in a decade. The UK and Germany remained the most targeted markets in the region as overall volumes in the UK closed the year +3.9 percent above those in Germany, where a shortage of stock has frustrated the long queue of buyers looking to invest.

Within Asia, China remained dominant with Beijing outperforming Shanghai, which had been 2016’s preferred market, with volumes in the former increasing by 105 percent y/y. Outside of China, transactions across Emerging Asia painted a positive picture, with flows into Indonesia and Malaysia magnified and India seeing record volumes for standing investments despite the dampening economic impact of demonetization

While Latin America at last emerged from recession, the region experienced its second worst real estate investment period on record, driven by a -29 percent decline in investment from North America. However, despite trade and political tensions, prospects for the region in 2018 are brightening as emerging markets in general, and Brazil in particular, gain in favour.

Despite the outperformance of the US economy, investment activity in North America declined last year, with a fall of -6.9% overall. Both global and domestic buyers drew back, but there were bright spots to be found. For example, Canadian investment grew at its strongest rate in five years at +12.0 percent and record levels of dry powder are still being aimed at the US. As a result, the outlook for 2018 remains strong, with deal activity set to rise even though a shortage of big-ticket sales may keep volumes flat.

Report author David Hutchings, Cushman & Wakefield’s Head of EMEA Investment, said: “Perhaps the strongest reason for cheer at present is the health of the economy and the globally synchronised nature of the upturn we are seeing. The increase in real estate development and forward funding in 2017 shows that investors already recognise this but the strength of the occupier market may yet surprise in the year ahead.

“Trade wars could knock us off-course but as solid economic momentum and tighter labour markets encourage more business investment, the cycle is still likely to be extended. It could be boosted further by the successful adoption of new technology and ways of working. At the same time, we are likely to be at the start of a rising trend in inflation, but the pace of interest rate tightening should remain slow and policy will be stimulative for much of 2018.

“As such, rising confidence will release more funds for investment and speculation, spurring the cycle on but with a changing emphasis from income to growth. As a result, capital flows will be dynamic and investors must look past the current noise in the market. They need to focus on growth, taking advantage of areas of structural and cyclical change, while at the same time getting ready for tomorrow by assessing how to de-risk their portfolios to be ready for future changes.”