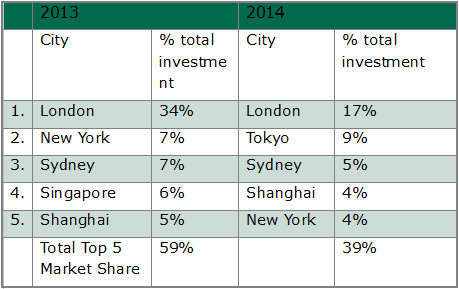 Asian investors deployed a total of US$40 billion into international commercial real estate in 2014, a rise of 23 percent year on year (2013: US$32.5 billion), according to the latest research from real estate advisor CBRE.

As Asian investors increase their exposure to global real estate, they are diversifying their geographic and sector footprint. 2013 saw transactions centred on global gateway cities, predominantly in the office sector.

In 2014, while London remained the preferred destination and offices the asset class of choice, a greater range of asset types and cities were invested in. Throughout the year investors looked to the next tier of cities, including locations such as Paris, Los Angeles, San Francisco and Washington. This is also demonstrated by the news that the first direct investment by an Asian institution in Dutch real estate has completed with Singaporean institution First Sponsor Group, acquiring Zuiderhof 1.

In addition, EMEA remains by some way the biggest centre for Asian outbound investment, attracting US$13.7 billion (34 percent) of capital from the region in 2014. Overall, EMEA accounted for 50 percent more Asian investment than the Americas (US$8.9 billion in 2014).

At a sector level globally, hotels were the biggest beneficiary of Asian investors looking beyond office markets, capturing 16 percent of total international spend vs 11 percent in 2013. In Europe, they invested ten times more capital year over year in the sector – US$1.370 billion (€1.04 billion) in 2014 versus US$137 million (€102 million) in 2013.

Across the board investor activity grew, with Singapore becoming the largest source of Asian capital, followed by China and Hong Kong. Taiwanese and Chinese insurers in particular grew their international real estate investment activities, by 770 percent and 310 percent respectively in the year.

Jonathan Hull, Head of EMEA Capital Markets, CBRE, commented: “Asian investors are hugely attracted to the European market and particularly its gateway cities. The trends we saw in 2014 represent an expected progression in their investment strategies – which has seen an expansion of their footprint into new cities and sectors as they become more confident in the market. We expect this trend to continue in Europe this year, as we have already seen in Holland with First Sponsor Group’s recent acquisition of the Zuiderhof 1 office building.”

Marc Giuffrida, Executive Director, Global Capital Markets, Asia, CBRE, added: “Last year was an important year for cross-border real estate investing—we saw the deployment of capital accelerate as a convergence of structural and cyclical factors encouraged pockets of new capital to enter the market. This is a key trend we expect will continue into 2015. The second half of 2014 saw Chinese and Taiwanese insurers begin to feature prominently in global real estate markets.

“Alongside the emergence of new capital, the early adopters of global investing are starting to evolve their strategies beyond the traditional gateway cities. While the acquisition of trophy assets continued to attract headlines, and New York and London remain the top destinations for investment, perhaps the biggest untold story for 2014 has been the movement into secondary gateway cities such as Paris and LA as well as regional centres of the UK. This trend can be best seen in the falling concentration of the top five global destinations among the total pool of Asian cross-border investment.

“Likewise, there is a shift in the types of assets Asian investors are seeking. While office continues to be the preferred asset class, particularly for new investors, there was a significant uptick in activity in hotels and industrial assets. Investors feel that by looking to new markets and asset classes they will be able to secure better yields and face less competition from other investors.”

Asian investors did not show noticeable systemic activity on the Russian commercial real estate market until 2014. Closure of Western capital markets for Russian companies forced government and corporates to strengthen Eastern direction of development. These efforts brought their results and led to increasing interest of Asian investors to the Russian market.

Chinese investors discussed their participation in such large scale projects as: Redevelopment of ZIL industrial zone; Development of subway and residential and commercial real estate in New Moscow area; Development of intermodal hubs in Vladivostok and Leningradsky region; Multifunctional complex “Chinese business centre Park Huamin with GBA around 100,000 sqm was started in February 2015.

Korean investors also increase their activity. For example, Lotte Group acquired hotel project nearby Isakievskaya square in Saint Petersburg for around RUR 1.6 billion. Additional investments in the project might exceed RUR 1 billion. They also indicated the interest to one of the most popular Moscow shopping malls Atrium with GBA above 100,000 sqm.

Anna Melnik, Head of Capital Markets Research, CBRE, Russia: “All these facts confirm the hypothesis that Asian investors are ready to revise their attitude to Russian commercial real estate market and increase their presence there.”