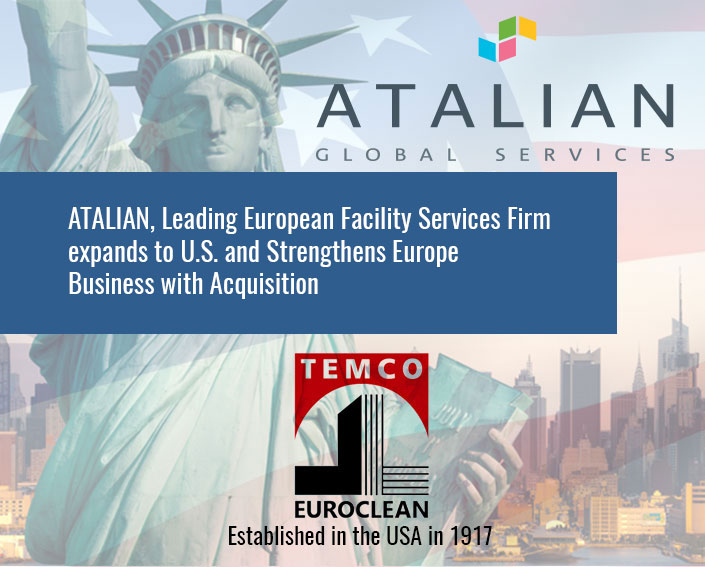 ATALIAN, an international provider of facility services to companies in 21 countries, has announced its expansion into the North American market with the acquisition of Temco Facility Services.

Based in Paris, ATALIAN is a family-owned company that has more than 35,000 employees and annual revenue of €1.33 billion (before acquisition). Its wide range of services allows customers to outsource most management of support functions, such as cleaning, multi-technical and facilities management, reception, security, landscaping, construction and energy management.

New York-based Temco is a nearly century-old provider of cleaning and associated services and security to companies in the United States and, through its Temco-Euroclean subsidiaries, in the UK, Belgium, Luxembourg and the Netherlands. Founded in 1917, the company had a turnover of $375.5 million in the year ended September 30th 2015, employs more than 10,000 people worldwide and operates in 12 states: Connecticut, Georgia, Maryland, Massachusetts, Minnesota, New Jersey, New York, North Carolina, Ohio, Pennsylvania, Tennessee and Texas.

The acquisition is another step in ATALIAN’s international expansion program initiated in 2000 by Franck Julien, president of ATALIAN Holding Development and Strategy. It supports the company’s overall goal of growing its business: by expanding its activities in France and in existing countries, and by establishing itself in three new countries per year.

“Deploying ATALIAN’s multi-business expertise across an increasingly global network of countries and continents allows us to build our international revenue base and strengthens the sustainable growth of the company,” said Julien. “Temco and Euroclean add highly visible and valued customers to our growing global portfolio, and we welcome their very capable service teams.”

In addition to establishing its presence in the U.S. market, this acquisition makes ATALIAN one of the leading facility services companies in Belgium and Luxembourg.