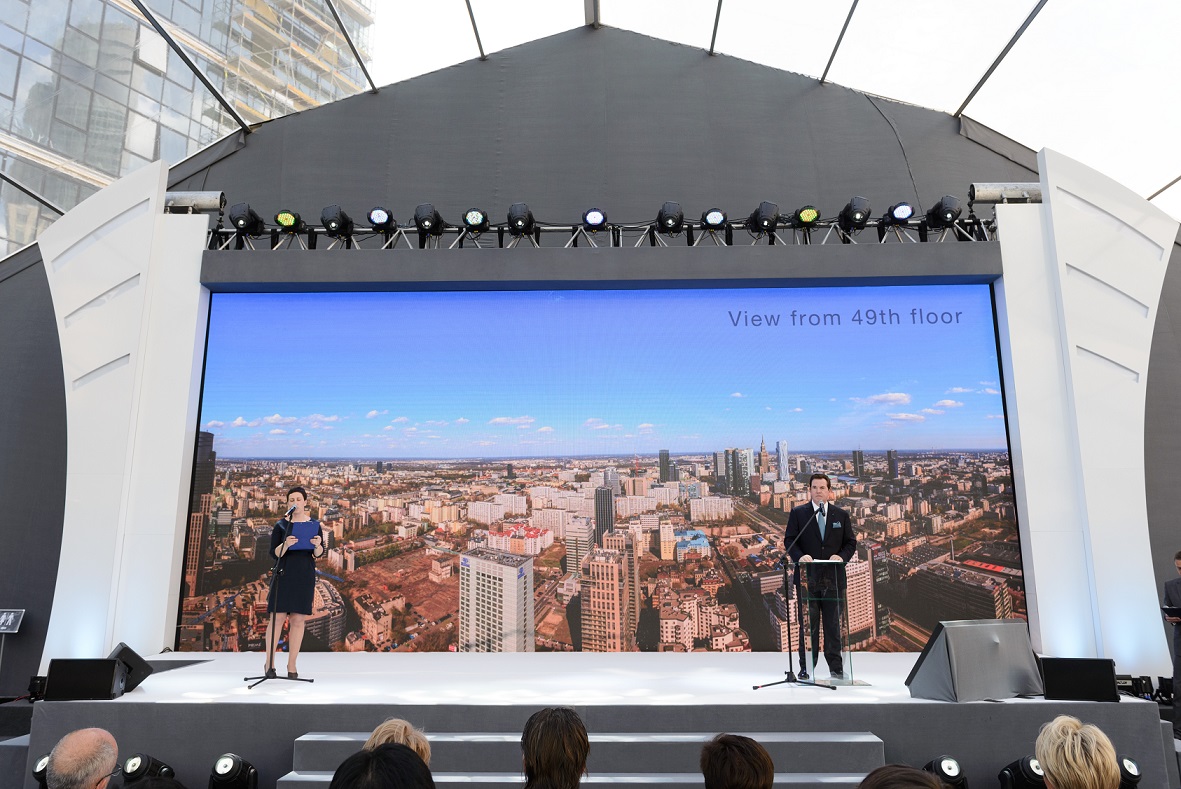 The final (49th) level of the tower building, one of the three elements of the Warsaw Spire complex, has just been reached. The Class A building now boasts an impressive height of 220 metres and is now only 12 months away from becoming Poland’s largest completed office investment.

The topping out was a symbolic way to close an important stage in the construction process of Warsaw Spire, i.e. the completion of the structure of the third building making up the complex. In July 2015 Warsaw Spire will reach its maximum height of 220 meters. Until the investment’s completion in April 2016, installation and finishing works will be carried out in buildings “A” (the tower) and “C.” Building “B” was delivered in September 2014.

In his opening speech, Paul Gheysens, President of Ghelamco Group, emphasized the project’s impact on the office property market, the whole city and its residents. “Warsaw Spire has a significant influence on the capital’s urban fabric. Thanks to it, a zone that had been inaccessible for years was veritably brought back to life through a successful combination of commercial and public functions. The place has become user-friendly and open to the local community. Warsaw Spire is Ghelamco’s flagship investment and the key one in Warsaw. It is also one of the most challenging construction projects that are now underway in Europe. The investment perfectly reflects Ghelamco’s philosophy: We create the future today,” he said, adding that there was still a lot of work to do until the project’s completion in 12 months.

Hanna Gronkiewicz-Waltz, the Mayor of Warsaw, recognized the developer’s extraordinary focus on the surrounding area. While congratulating Ghelamco on its unique project, she wished it a lot of success and new investments, and assured the company’s representatives that “I love Warsaw as much as you do.”

The event’s special guest, Colette Taquet, Belgian Ambassador in Poland, remarked that Ghelamco’s investment offered much more than just new office space. “This complex reflects the soul of the city. It is clear that Warsaw is a city full of dreams. Mr Paul Gheysens managed to grasp what’s most important,” said the Ambassador. She dubbed the project “the new heart of Warsaw” and noted the symbolic significance of the location.

”From the very start we could see the vast potential of this place, located next to Rondo Daszyńskiego, one of the Warsaw road system’s crucial points. The design process was preceded by extensive research and analyses. We wanted to meet the tenants’ expectations, offering more than just perfect location and state-of-the-art technology. Addressing the market demand, we developed a modern mixed-use office complex and a new urban square,” said Jeroen van der Toolen, Managing Director CEE at Ghelamco.

Warsaw Spire has a total office area of 100,000 sqm, with 60,000 sqm in the 49-storey tower building. Two smaller, lower 15-level buildings provide 20,000 sqm each. The occupancy rate has already gone beyond 50 percent, a year before the investment finish date.

Construction works kicked off in mid-2011. The first stage took eight months and involved developing Poland’s deepest (55 meters) diaphragm wall. When the underground sections had been completed, the over-ground ones started emerging. The structure of the 55-meter “B” building was finished first – in 2013, with “C” building following suit shortly thereafter – in 2014. Works related to the tower building were underway at the same time. In line with the investment schedule, each level took roughly a week to be constructed. Now the 49-storey skyscraper can be seen from virtually any place in Wola and Śródmieście districts.

Towering above its surroundings, Warsaw Spire has completely changed the panorama of downtown Warsaw. This unique investment will also reshape the urban fabric at Rondo Daszyńskiego. An urban space that efficiently combines commercial and public roles will emerge between Grzybowska, Towarowa, Łucka and Wronia Streets – in an area that has functioned as a closed industrial zone for years. Plac Europejski, a new square based on an innovative architectural and urban planning concept, will be completed in April 2016.