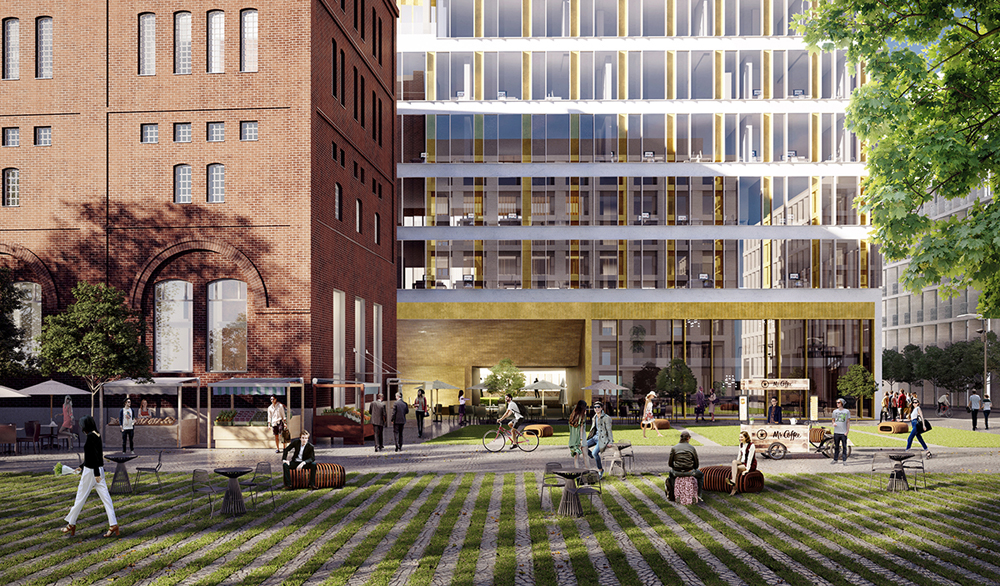 A multifunctional development, full of historical references – the former area of one of the largest breweries in Europe – is set to thrive again in less than three years. A dozen or so residential and office buildings gathered around spacious town squares are being developed in the quarter of three streets: Grzybowska, Wronia, Chłodna and Krochmalna. The flagship project of the largest Polish developer – Echo Investment – combines the old and the new on an unprecedented scale in the left-bank part of the capital city.

The key element of Browary Warszawskie will be public areas such as a square near the historical brewhouse building, the brewery gate facing Grzybowska Street and the so-called breakfast square between residential buildings in the northern part of the plot. The squares will be the focal points of the complex – they will be surrounded by restaurants, cafes, shops and service outlets. There will be no shortage of natural green plants and landscape architecture. Residents, walkers, tourists, employees of the companies which will have their offices here will be able to use an open area of as many as 15,700 sqm, which will make it possible to freely walk around Browary Warszawskie all day and night. The project will also involve the development of new streets, including a completely new section of Krochmalna Street.

A restored section (1,750 sqm) of 19th-century cellars will be a special element of the enterprise. It will enable you to breathe the atmosphere of old Warsaw while using gastronomy and retail outlets cultivating craft traditions. The central garden with an area of 1,500 sqm will be developed above the cellars. It will allude to even earlier history of the Wola district as it used to be a district of orchards and gardens before it was transformed into an industrial basin.

The plot of Browary Warszawskie, which has an area of nearly 4.5 hectares, is one of the largest construction sites in the capital city. As many as 1,000 people will be working at the site at the peak of the construction work. The underground section of residential buildings is already under construction. The first building, located closer to the junction of Wronia Street and Chłodna Street, will emerge from the ground in June in order to reach its ultimate height of seven floors. The construction of the following three buildings is to be launched soon, one of them will include superior standard apartments. The first few residents will move into Browary Warszawskie at the beginning of 2019.

Echo Investment is also planning to develop two buildings which will be connected with each other and will include apartments for rent.

Companies will also be able to use the assets of Browary Warszawskie. Comfortable offices will be available in modern A Class buildings as well as the historical development of the former brewery, including the laboratory, the brewhouse and the so-called factory owner’s villa. Restoration work is conducted under the supervision of the historical preservation officer in the latter building, which used to belong to the brewery’s owners, the Schiele family.

The construction of an 11-storey building with a glass facade is to start soon. It will be located the closest to the junction of Grzybowska Street and Wronia Street. Three more office buildings are to be developed along Grzybowska Street. They will be in line with the business character of this part of Warsaw. The ultimate completion of Browary Warszawskie is planned for 2020.