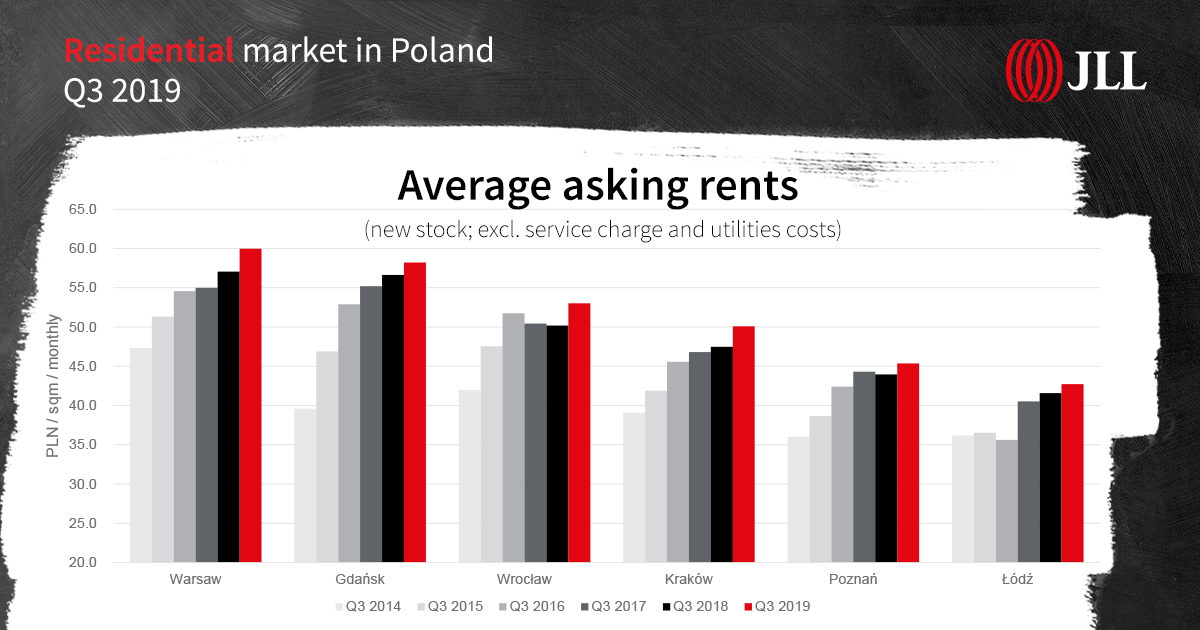 The spectacular entry of TAG Immobilien on the market, the purchase of a majority stake in Echo Investment by Hungary’s WING, regular purchases by Czech Republic’s Zeitgeist, and another (already third) transaction of Germany’s Catella fund on the Polish market are clear proof that Poland’s rental market is growing.

In 2019, the Polish housing market experienced an acceleration and increase of projects in the rental and private student housing sectors. Our country is still on the radar of large foreign investors and some of them have been able to conclude spectacular deals. Although potential institutional buyers still aren’t able to purchase turn-key portfolios on an expected scale, and entering the market mostly means building new stock, the institutional rental sector is drawing more and more interest and will undoubtedly be a desired category of safe assets in 2020.

Poland is still an immature, albeit extremely attractive market for entities focused on investing in the institutional rental sector. Although entering our market entails greater risk, this risk is offset by a higher capitalisation rate. While ROIs of 6-8% are impossible to achieve in Western Europe, they are still attainable to investors in Poland. The growing interest in renting among the younger generation and the consistent rise of rental rates (they have increased by nearly 25 percent since 2014) seem to be enough to attract more players.

Old in a new way

For those investors who have already had projects in Poland, the past year was a time of portfolio expansion. 2019 was an intensive year for the Czech investor Zeitgeist Asset Management. In mid-2019, they signed a contract for the purchase of the Main Post Office in Kraków, a historic building at Wielopole 2, as well as a magnificent plot with existing buildings at Cystersów 21. Although the actual revitalisation work is not expected to start until 2022 and the investor’s plans for the buildings are still unknown, the project is drawing a lot of interest due to its unique location and expansion potential. The same holds true for the 1-hectare plot at the intersection of Nowogrodzka and św. Barbary streets in the Warsaw’s district of Śródmieście, which was bought by Zeitgeist AM from Orange Polska for an impressive sum of PLN 350 million (EUR 81 million). In order to provide adequate time to transfer the telecommunications infrastructure located in the buildings, the transaction was a sale-and-leaseback contract, where the seller will lease part of the property until 2026.

Work, however, did begin on the revitalisation project of a tenement building near Port Praski in Warsaw’s Praga Północ district, with 100 units to be delivered by the end of 2021, some of which are in the historic tenement building. The investor currently has 6 properties in Poland, in which they mostly plan to provide rental and student housing.

“Zeitgeist AM specialises in projects utilising existing, often historic buildings. Tenements have their own specific character and are quite unique – especially in Warsaw, where few of them survived World War II. There is certainly no shortage of people willing to live in a renovated and modernised “building with a history”. Adapting such properties to the needs of the rental market can also be considered as restoring them to their original function. Many of them were constructed for private entrepreneurs or institutions (including ZUS – Social Insurance Institution) as rental buildings,” comments Maximilian Mendel, Head of Residential Investment at JLL.

The Israeli company AFI Europe chose a similar path of operations in Poland. This spring, the investor began revitalisation works on the Wolf Krongold historic tenement, commonly referred to as “Pekin” (Polish for “Beijing”), located at the intersection of Złota and Żelazna. The company purchased the property in 2015 for PLN 21 million and plans to build around 160 units there. The tenement has stood empty for the last 16 years. The building permit was issued in 2018 and the long-awaited renovation started in 2019. Due to its unique nature, the project will take about 30 months to complete.

A much higher price of PLN 60 million had to be paid for the Natanson tenement located at Nowy Świat. The purchase of the building, nicknamed “Rolex” by Warsaw residents, was announced this past November. The investor promised to deliver premium class rental apartments in the building previously owned by Warszawskie Przedsiębiorstwo Geodezyjne (The Warsaw Surveying Company).

Down the beaten developer track

Regardless of the direction of Poland’s development, Warsaw will undoubtedly continue to experience growth. A completely different strategy was adopted by the German investor TAG Immobilien. Their acquisition of the leading Wrocław developer Vantage Development for approx. PLN 365 million (EUR 85 million) this November caused a major sensation on the Polish market. The investor intends to build 10,000 rental units within a short period of time, mostly in Wrocław.

“Major foreign entities have been observing the Polish market for a long time, but the problem is lack of product. Most developers are not too willing to build for institutional investors, because retail sales still give them better margins. The purchase of a development company with a large portfolio of building plots and projects in the pipeline allows to shorten the time necessary to build a portfolio and makes it easier to manage this process,” says Krystyna Pietruszyńska, Consultant at JLL Residential Investment.

LRC is another player looking for an early bird bonus. The value of the European portfolio of the LRC Group is over EUR 5 billion, and – in addition to commercial facilities – the company manages over 16,000 housing units. Having operated on the commercial property market in Poland since 2016, the company took its first steps towards institutional rentals this year. The first transaction, concluded in March 2019, was the purchase of 175 units in the Pacific Residence, located in Warsaw at Solec 24. This 12-floor building with ca. 200 units in the Powiśle district has stood almost empty for 6 years.

Another transaction of the LRC Group, carried out jointly with Atrium European Real Estate Limited and an undisclosed party, is the forward purchase of a residential tower with rental units located in Warsaw at Grzybowska 59. The skyscraper under construction will be located in the heart of Wola’s business district, close to the Hilton Hotel and the Platinum Towers rental complex. The seller, Golub GetHouse, bought this attractive plot two months before the resale for about PLN 150 million (i.e. approx. PLN 54,000 net per 1 sqm of the plot). Work on the building with a planned height of 170 metres and 900 units is supposed to begin at the turn of 2020 and 2021. Importantly, Golub GetHouse themselves believe in the growing importance of the PRS (Private Rented Sector). In 2019, they created a new brand – Inspirentals, whose core activity will consist of rental projects. In Q1 2020, they will start the construction of the Postępu Apartments housing estate with over 350 units in Warsaw’s Służewiec district. In Q2, they are planning to start the 42-storey skyscraper Liberty Tower, located next to the project sold to LRC. According to the company’s plans, by Q3 2023, their portfolio will grow by 500 completed rental units. The building will also contain a Radisson RED hotel. Next to the Liberty Tower, the investor is renovating a historic, 7-storey tenement house with 34 units for rent.

Golub GetHouse operate on a grand scale and do not limit themselves to the rental market. In tandem with its American partner, CA Ventures International, they also began to invest and manage the LivinnX student house network. The first student house in the network is already operating in Kraków. Plans to launch another one have been announced recently – this time in Warsaw.

On 18 December, Catella announced the conclusion of their third transaction on the Polish market. Acting on behalf of the Catella European Residential (CER) Fund, they bought three buildings in Kraków (at Rakowicka) from Hines for EUR 20 million. Two of the buildings will accommodate 154 rental units and the third one will be a private student house with 139 rooms. The offer will be launched on the rental market in early January. In its Polish portfolio, Catella already has 72 luxury apartments located in the iconic Złota 44 residential tower in Warsaw, and 193 units in a project located in Warsaw at Pereca.

“Projects involving developer risk or even forward deals are a big challenge for many entities considering entering the Polish market. For many funds – especially conservative ones – they are, along with the exchange rate, a deal-breaker. The third consecutive successful transaction of Catella, in which we had the honour to participate as a transaction advisor, confirms that it is an effective and efficient way of expansion,” remarks Maximilian Mendel, who was an advisor during the pioneering (on the Polish market) purchase of an entire residential rental building, located at Pereca.

The Resi4Rent – a professional institutional rental platform, launched in 2018 and focused on building a portfolio of budget segment units – also continues to grow. Currently, the company has 7 projects under construction or in an advanced phase of planning. The first buildings were released for rent in November 2019 – in Wrocław (302 units at Rychtalska) and Łódź (219 units at Wodna). Another 1,200 units under construction are located in Wrocław (Kępa Mieszczańska) and Warsaw (Browary Warszawskie and Taśmowa). Within the next 2 or 3 years, the company aims to manage 5,000-7,000 units throughout the six major Polish cities: Warsaw, Kraków, Wrocław, Gdańsk Poznań and Łódź. Echo Investment (30% of shares), one of the leaders on the Polish development market, is responsible for the planning, design and completion of the projects. A reputable investment fund of international standing is the other majority shareholder (70% of shares). The quality of services provided is supervised by a professional team of asset managers from Griffin Real Estate. The growth potential of this segment was recognised by Hungary’s WING, which concluded the purchase of a 56% stake in Echo Investment at the end of December.

Forecast and expectations in 2020

Year by year, Poland’s rental housing market is growing more mature, as evidenced by the large supply of new, high-quality rental stock, rising rental rates, and a growing number of institutional players operating in this market sector. The progressing commercialisation of the first institutional assets further supports this claim. Almost all residential buildings acquired by investors under package contracts – despite initial problems – currently have very high occupancy levels. Most of them are fully rented out, while the rest have only a few available units left. Demographic and social changes are also driving investment in this sector.

“The Polish market is one of the most attractive in Europe in terms of return on investment. Over the past five years, more than PLN 3 billion has been invested in this sector, and we should remember that this sector did not exist at all five years ago. The increasing activity and number of investors operating on the Polish market herald an abundance of new large-scale transactions in the coming year,” summarises Maximilian Mendel.