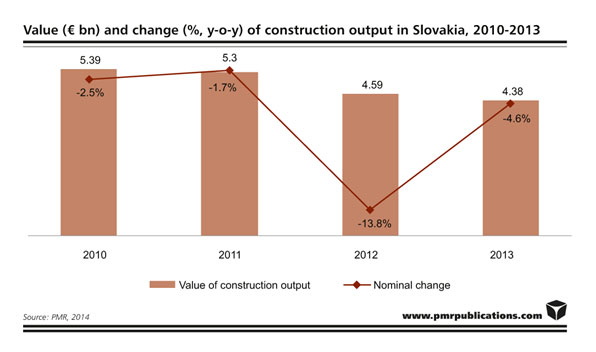 €3.9bn from the EU funds to revive the Slovak construction market by 2015 – EuropaProperty

Slovakia is to receive a total of €3.9 billion from the EU for transport infrastructure construction for the period 2014-2020, which is an increase of more than €750 million compared to 2007-2013. Of this roughly €850 million is to go into rail construction and some €1.6 billion into road construction. A further amount of at least €500 million is to be spent on public transport projects and over €100 million on water transport schemes. On top of that, Slovakia is to receive €743 million from the EU newly-created fund, Connecting Europe Facility.

According to a new report entitled “Construction sector in Slovakia 2014 – Development forecasts for 2014-2019” published by the analytical and research company PMR, following two years of decline, in 2013 Slovak civil engineering construction managed to recover slightly and is expected to lead and drive the growth in the coming years along with residential construction. In contrast, activity on the non-residential market remains rather low and is likely to remain so until business confidence gains more traction to fuel new investments.

PMR’s report highlights major factors that are to have a favourable bearing on market forecasts, these include: launch of a new EU funding programme as of 2014, lack of available space in various non-residential segments, lowering of mortgage interest rates, drop in the number of available flats, high number of new residential constructions announced, and increasing interest in alternative sources of energy.

It also considers the causes of an adverse effect on forecasts such as a price war, which is fragile financial standing of Slovak contractors (mostly smaller and mid-size companies), lack of transparency in construction, low purchasing power of citizens, and reduced demand for construction work which will further sharpen market competition.

In 2013, the Slovak Ministry of Transport, Construction and Regional Development confirmed its plans to massively fund road infrastructure construction in the coming years. By the end of 2015, it wants to have contracted all the road infrastructure work covered by the EU funding programme 2014-2020. Between 2015 and 2020, the ministry’s priority is to have all this construction underway. One of the top priorities on the ministry’s agenda is the construction of the D1 motorway between Bratislava and Kosice. Additionally, by 2016, the ministry wants to have started repairs to a total of 1,040 km of class I roads and to have finished the work for 834 km.

Residential construction totally unexpectedly finished the year 2013 with a slight growth of almost 3 percent year on year. Much of that was driven by the surge in construction prompted by continual decline of interest rates for mortgages and lowering prices of residential properties. The year 2013 also experienced a very high number of new plans for further construction of residential complexes, which are expected to contribute to the growth of this segment in the coming years

The non-residential sector is not likely to return to growth in 2014 as no major developments are on the horizon. The construction of industrial space has almost frozen and not many office construction projects are likely to happen in the next two years. Some activity is noted in the retail segment, but completions of malls and retail facilities are experiencing significant delays sometimes while, at the same time, the investment is tending to focus on smaller towns and smaller schemes. No major retail construction was unveiled in 2013; rather the year saw the announcement of a relatively high number of smaller retail projects. The retail sector is expected to lag behind other non-residential segments as investors and developers, faced with a low consumption rate, are lukewarm to the idea of investing in this area.