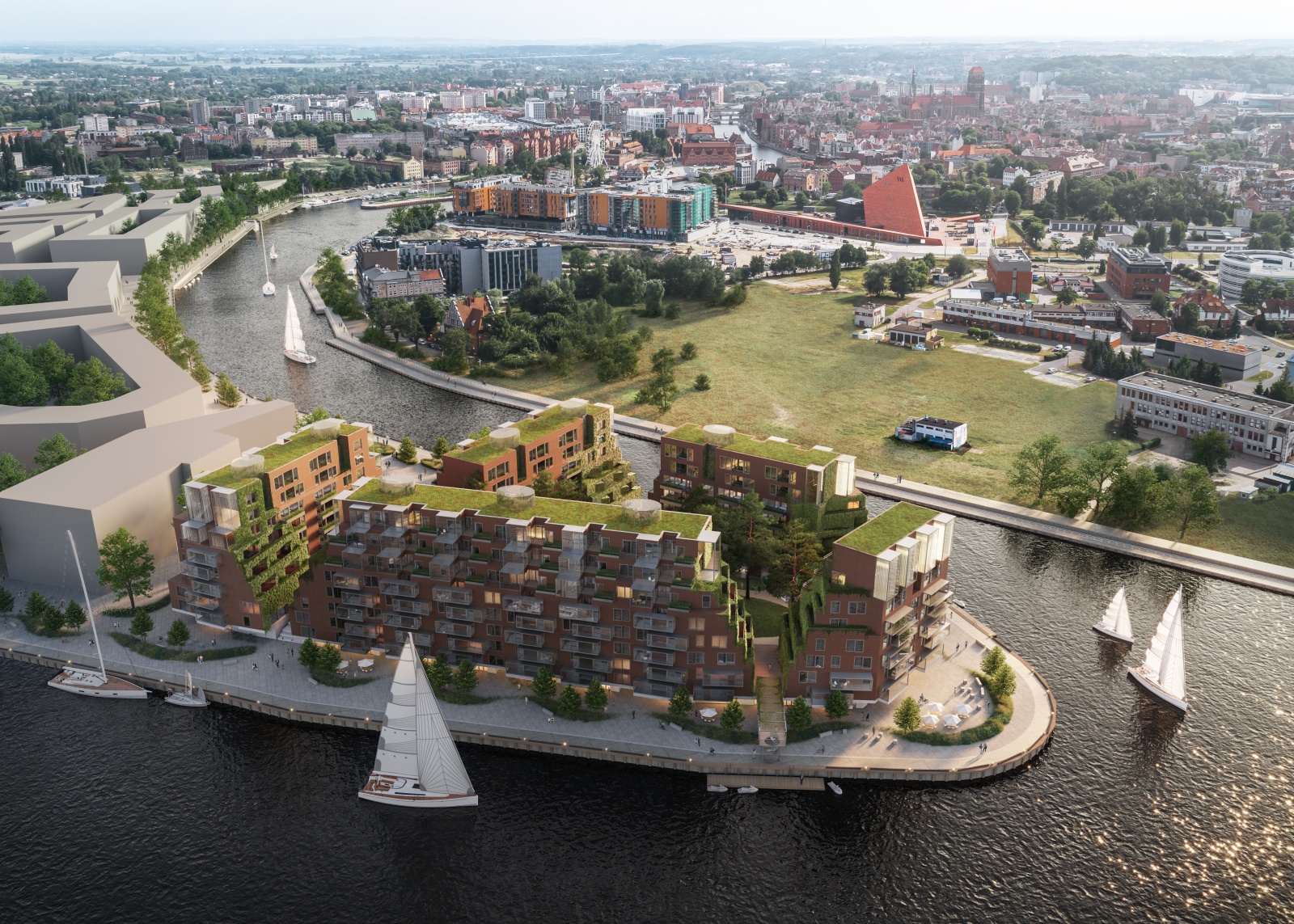 The Capital Park Group has signed the final purchase agreement for two plots of land in Gdańsk with a total area of 1.3 hectares at the Polski Hak. It is one of the most prestigious locations in the heart of the Tricity, on a promontory, in the picturesque surroundings of the Motława estuary which flows into the Martwa Wisła river. The planned project is a residential development accompanied by commercial functions. The author of the winning architectural concept of land development is the JEMS Architekci studio.

In November 2020, the Capital Park Group signed a conditional preliminary agreement to acquire shares in Projekt I Sp. z o.o., a company owned by the Warsaw-based developer ECO-Classic. Projekt I Sp. z o.o. is the perpetual usufructuary of the Polski Hak site. In order to close the deal, it was necessary, among other things, to obtain a permit from the Minister of Maritime Affairs and Inland Navigation. Capital Park met all the formal requirements and signed the purchase agreement for the land on 31 March 2022. The advisors in the process were experts from the law firm Greenberg Traurig and MDDP Outsourcing.

“The 18 months-long process of acquiring the land at the Polski Hak has come to an end. We are now the owner of a beautifully situated plot, which will soon be given new functions. We intend to make the location a representative landmark of this part of the city. The investment we are designing will be modern, addressing the expectations and needs of the fast-developing city of Gdańsk, implemented with environmental and climate change concerns in mind,” said Marcin Juszczyk, Member of the Management Board at Capital Park Group.

The investment is located at Sienna Grobla Street which runs along the waterfront of the Polski Hak near the Main Town and its monuments including Neptune’s Fountain, the Basilica of the Blessed Virgin Mary and the famous port crane. Nearby are the European Solidarity Centre, the World War II Museum, the Gdańsk Shipyard, and the Hevelianum educational and recreational centre. The site is extremely attractive thanks to its location at the confluence of two rivers: the Motława and the Martwa Wisła, as well as the harbour and coastal panorama.

The Capital Park Group opened a competition for the development of the site and invited six architectural studios to participate. The challenge was taken up by four design studios: JEMS Architekci, Medusa Group, Bernatek Architekci and KD Kozikowski Design Pracownia Architektoniczna. The author of the winning concept is the JEMS Architekci studio.

“It is an extraordinary place with great exposure, visible from many perspectives from land and water. Just as unique is the spatial context of the industrial areas adjacent to the project, although these will probably be transformed in the future. The proximity to the historic fabric of the city is also very special. The geometry of parts of the building, the shape of its sections and facades hint at the rich architectural heritage of Gdańsk in an attempt to create a contemporary, expressive form of the whole at a place where, in our opinion, the expression of form is spatially expected,” said informs Marcin Sadowski, Architect and Partner at JEMS Architekci.

The project under preparation will predominantly serve residential functions with complementary retail and service outlets located on the ground floors of the buildings. A recreational promenade with gastronomic services open to all Gdańsk residents and tourists will play an important role. Carefully designed greenery along the waterfront, which was renovated in 2020-2021, will be another important part of the investment. According to the plan, piers will be set up for mooring small vessels on the bank of the Martwa Wisła river. The architecture of the project ensures that most flats have a view of the river. In addition to the original architecture, the distinctive features of the investment include additional spaces and functions for future residents with a unique character of a semi-private space of the green courtyard as well as a private swimming pool, gym, and coworking spaces, playrooms for small children and rooms for teenagers.

“Our project at the Polski Hak was developed on the basis of guidelines arising from changes in the Local Development Plan which came into force at the end of November 2021. These included changing the function from industrial and commercial to residential and commercial; limiting the height of buildings to 30 metres, which ruled out the construction of a compositional dominant on the promontory; adding a publicly accessible pedestrian route along the Martwa Wisła and the Motława waterfront, and a minimum percentage of a biologically active area set at 30 percent. High-quality public spaces and carefully designed accompanying greenery are in line with the investment implementation strategy followed by our company,” added Sylwia Filewicz, Head of Construction & Development at Capital Park Group.

Work is underway to develop a multi-disciplinary concept for the investment. Subsequently, the Capital Park Group will initiate the procedure for obtaining an environmental decision, and once this decision is secured, it will apply for a building permit. The commencement of construction depends on the administrative process. Construction work is scheduled to start at the beginning of 2024.

The Polski Hak investment is another project of the Capital Park Group in the Tricity. The company previously completed the revitalisation of historic old townhouses, where the Hampton by Hilton Old Town Gdańsk Hotel currently operates (June 2018); the modernisation of Galeria Zaspa located in the former Gdańsk-Wrzeszcz airport (April 2016); and the redevelopment of the legendary building housing the Cristal restaurant in Gdańsk Wrzeszcz (2010).

The so-called Polish Hook is an area with a rich history – in the 16th century, it was a kind of the city’s water tollbooth and was mainly occupied by fishermen, who had their settlement there. The name ‘Polski Hak’ (Polish Hook) derives from the Low German language, as ‘Hake’ meant a cape or a shoal. In the mid-19th century, the area was taken over by Julius Klawitter, who began to expand the Klawitter Shipyard, located there since 1827, and at the beginning of the 20th century, the entire shipyard production was moved there. During the interwar period and the Free City of Gdańsk, this area was also the harbour of the Polish Rowing Club in Gdańsk. After World War II, Fishery Profuction Plant Gdańsk (‘Zakłady Rybne Gdańsk’) and the base of the ‘Jedność Rybacka’ Fishing Cooperative were opened here. The production plant’s buildings were recently demolished and now the area of the Polish Hook is undeveloped.