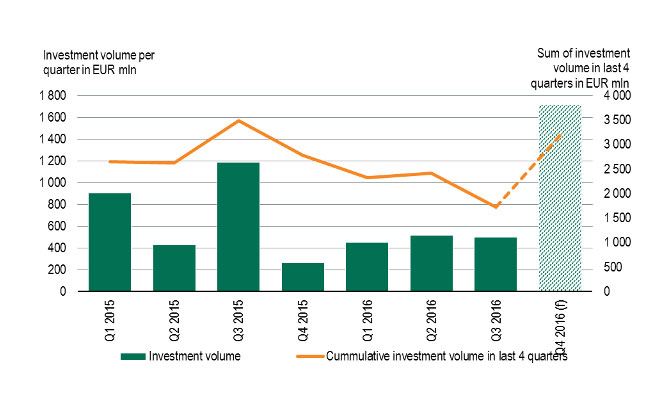 CBRE has released the Czech Republic property investment report for the 3rd quarter of 2016. Investor demand across all sectors continues. We expect that a volume of ongoing transactions in Q4 will exceed the total property investment volume in Q1 – Q3 2016.

CBRE sees strong demand across all sectors and expect that Q4 will be strongest quarter ever.

Chris Sheils, Head of Investment Properties CBRE, commented: “In Q1-Q3 2016, the total investment volume reached around €1.46 billion. There is an unprecedented volume of ongoing transactions and whilst we expect that some will eventually close in 2017, the outlook is that 2016 will be a record year in terms of investment volumes, with Q4 being the strongest quarter ever recorded.”

There is a reasonable assumption that the total investment volume in 2016 will reach €3 billion, or even exceed this record high volume, coupled with continuing yield compression. The office sector should dominate the market this year with a 40 percent share of the 2016 investment volume.