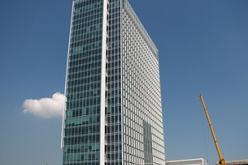 About €2 billion has been invested in the region year to date, up 12 percent on H1 2013. Given the significant pipeline of transactions, year-end volumes are expected to exceed 2013 levels. The Czech Republic saw the highest volume of transactions over the second quarter; however, half-year results show that Poland continues to attract the strongest investor interest.

The office sector continues to dominate across Central Europe with 42 percent of the investment volume in Q2. This reflects investor confidence in the robustness of best-in-class assets and prime locations against new supply in weaker locations. The largest transaction in the office sector, and at the same time, the largest investment deal made in the CE region in the second quarter was the PPF’s purchase of City Tower skyscraper in Prague 4.

The largest CE retail investment transaction in Q2 was ING Real Estate’s sale of their remaining 50 percent share in Allee shopping centre in Budapest for €95 million. Other significant deals included Meyer Bergman’s acquisition of Fashion Arena in Prague and CBRE Global Investors’ acquisition of Galeria Mazovia shopping centre in Płock, Poland. The retail sector is expected to see considerable activity in H2 2014 across the region.

James Chapman, Partner, Head of CE Capital Markets at Cushman & Wakefield, said: “Core investors are looking at Poland and Czech for prime, landmark shopping centres, viewed to offer better value against other core European countries whilst the regional cities across both countries have opened up with a significant shift of core and value-add capital towards this sector. Prime shopping centres in Hungary and Slovakia are also back on the radar for investors searching for stock.”

The industrial sector continues to outperform its 10-year average with 20 percent of all investment. The largest warehouse investment transaction and the second largest across all sectors was Blackstone’s acquisition of Standard Life Investments’ logistics portfolio in Poland for €118.2 million. Demand in this sector shows no signs of slowing down with several large deals expected to be announced in Q3. However, availability of stock is likely to slow this down towards the end of the year and into 2015.

The Czech Republic is benefiting from a significant increase in transactions as investors pour back into the market on the back of the improving economy. Total investment volume in the Czech Republic in the previous quarter reached €340 million compared with €108 million in the same period in 2013.

Poland was restricted to a smaller number of deals, but a dramatic increase in volume is expected during Q3 with several significant deals close to completion. The country’s transaction volumes in the second quarter totalled €242 million.

Piotr Kaszyński, Partner, Head of Capital Markets at Cushman & Wakefield in Poland, said: “Although Poland’s deal volume in Q2 2014 is down on that recorded in the first three months of the year, the Polish investment market does not show any signs of weakening. The lower investment figure was due to the absence of single large transactions such as those of Rondo 1 and Poznań City Center made in the early part of the year.”

He continued, “However, Q2 2014 witnessed several notable deals in each commercial property sector, including the sale of Standard Life Investments’ prime logistics portfolio, which was this year’s largest warehouse transaction. The office sector continues with strong interest in prime assets outside Warsaw, evidenced by Griffin’s acquisition of Office Centre Lubicz in Krakow. In the retail sector the focus of investment activity is shifting to properties in cities with less than 500,000 inhabitants, an example of which is the acquisition of Galeria Mazovia in Płock by CBRE Global Investors.”

Appetite for Slovakia, Romania and Hungary has increased notably during H1 2014, with these markets clearly back on the radar for many funds. On the back of the transfer of 50 percent of Allee Shopping Center, Hungary recorded its best Q2 results since 2010, and further landmark deals are in their final stages of closing. We expect that this growth in interest will evolve into greater transaction volumes in these markets during H2 2014.