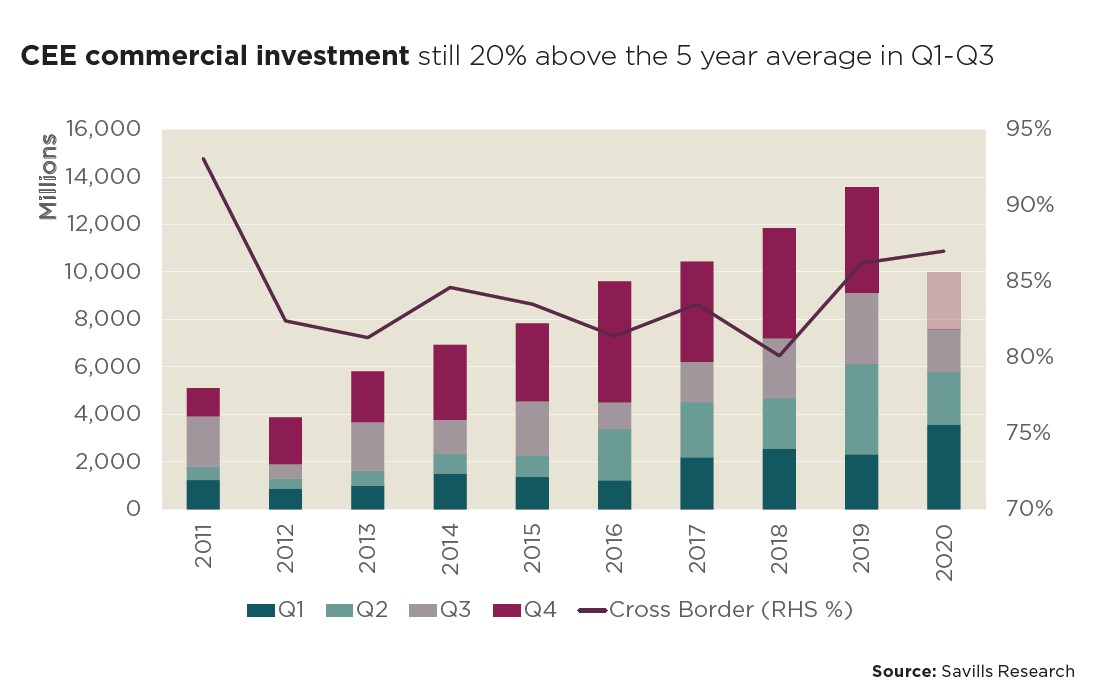 According to Savills latest research, total property investment activity in the Czech Republic, Poland, Slovakia, Hungary and Romania for Q1-Q3 2020 was €7.6 billion, the third-highest volume on record, despite the global Covid-19 pandemic. Total investment volumes by year-end are forecast to surpass €10 billion, which would be in line with the five-year average.

The figures have been boosted by a number of portfolio transactions since the beginning of the year, accounting for 44 percent of the total investment turnover compared to 24 percent last year. The shares were particularly high in the Czech Republic (67 percent) and Poland (47 percent). Some of the largest transactions of 2020 took place in these two markets, such as the €1.3 billion Residomo apartment portfolio in the Czech Republic in Q1 and the €1 billion Goodman industrial portfolio across the region in Q3.

While offices continue to represent the largest market share at 38 percent, logistics now accounts for 30 percent of the total, overtaking retail at 11 percent, according to the international real estate advisor. At €2.3 billion, industrial investment over the first three quarters has already surpassed last year’s total.

Chris Gillum, Head of Offices, Regional Investment Advisory EMEA, Savills, says: “Cross-border investors have once again been the most active investors in CEE, despite the restrictions due to Covid-19. Attracted by strong yields and positive long-term fundamentals in the region, they accounted for 87 percent of the volume transacted between Q1 and Q3 2020, above the 84 percent five-year average. A prime example is the successful disposal of Buda Square and Margit Palace in Budapest by Hungarian fund manager Adventum who, advised by Savills and local associate Eston International, sold the two office assets to UK-based Resolution Property together with Chinese conglomerate Fosun International. The gradual convergence of buyer and seller expectations should lead to more transactions, and this will likely be concentrated in the core segment of the market.”

Eri Mitsostergiou, Director, European Research, Savills, adds: “This year will be driven by a rise in investment in logistics assets and core offices in CEE. The residential sector is also becoming more established although restricted by lack of product, while retail transactions will be focused on convenience and food retailing.

Fraser Watson, Director, Investment Advisory at Savills Czech Republic, says: “The CEE region is holding up well despite the unprecedented macro pressures. This reiterates the strong standing of CEE in the eyes of investors who appreciate both the generally good level of political and business stability, combined with continued expectations of regional growth prospects. The investment volume re-positioning amongst the various real estate sectors is in line with the wider European trends, with industrial and residential rising higher on investors’ wish lists. The Czech market is continuing to witness a strong level of investor demand, especially true towards the more core end of the spectrum, with the consistent complaint of lack of product being the single biggest barrier to higher transactional volumes.”