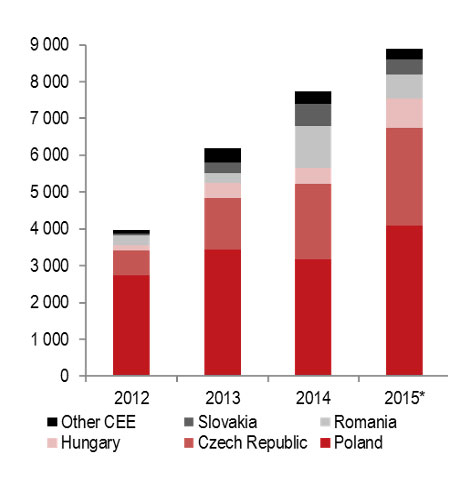 Stuart Jordan, Head of Capital Markets CEE at JLL, said: “With almost €9 billion in real estate transactions, 2015 represented the third highest CEE regional investment volume on record, and second highest results on record for Poland and the Czech Republic. Whilst these two leading markets attracted 76 percent of regional volume, 2015 saw growth and continued interest also in Hungary, Romania and Slovakia. Further to this, the SEE region is showing strong signs of attracting new equity sources to the region, with Serbia leading the way in terms of large institutional grade transactions. Investor appetite is set to continue and considering the ongoing deals and those in the pipeline, we expect 2016 to be another good year for Central and Eastern Europe markets.”

The property investment volume in Romania in 2015 is estimated at approximately €650 million, coming off the back of a very strong 2014, when ca. €1.17 billion was transacted, including a number of unique, very large deals. However, 2015 witnessed an equally large number of transactions proving that the market remains liquid and is maintaining momentum. Bucharest accounted for more than 80 percent of the total investment volume.

A number of 5 investors were involved in over 80 percent of the property investment volume in Romania in 2015. CTP, GLL, P3, NEPI and Globalworth purchased properties in Romania totaling over € 500 million last year.
”CTP, GLL and P3 concluded the biggest investment volumes last year, compared with 2013 and 2014, when NEPI and Globalworth were the most active players. The increase of the number of the investors on the Romanian market will also continue this year, although, will see new purchasers on all market segments. JLL is under negotiations property investments transaction which are going to be finalised in the next months and which have big chances to attract new investors,” commented Silviana Badea, Head of Capital Markets, Associate Director, JLL Romania.

The most active buyer in 2015 was CTP, the Dutch investor acquired 6 industrial properties across Romania, for a combined total value of over €130 million. 2015 saw the entry of several new players on the Romanian real estate market. In industrial, P3 and CTP bought their first standing assets in the country.

On the office market, GLL – the German institutional buyer acquired, after a 6 years hiatus, Floreasca Park and Victoria Center, 2 office buildings in major office areas in Bucharest for a combined value of close to €130 million.

Market volumes were dominated by industrial transactions (41 percent), making 2015 an all-time record year for this segment, followed by office (38 percent). The largest transactions registered in 2015 in industrial included the acquisition of Europolis Park by P3 from CA Immo and the purchase of Bucharest West by CTP from Portland Trust.

Notable transactions for offices were the purchase of Floreasca Park by GLL from Portland Trust and that of Green Court Building B by Globalworth from Skanska. The only large retail transaction was the disposal of Iris Titan by Aberdeen to NEPI.

The most active buyer in 2015 was CTP, the Czech investor acquired 6 industrial properties across Romania, for a combined total value of over €130 million. 2015 saw the entry of several new players on the Romanian real estate market. In industrial, P3 and CTP bought their first standing assets in the country.

On the office market, GLL – the German institutional buyer acquired, after a 6 years hiatus, Floreasca Park and Victoria Center, 2 office buildings in major office areas in Bucharest for a combined value of close to €130 million.

Prime office and retail yields are at 7.50 percent while prime industrial yields are at 9.00 percent. Yields have compressed between 25 and 75 bps since the start of 2015, but no significant further compression is expected in the first half of 2016.

Investors looking for distressed property in Romania will struggle to find any that can be worked out. More core players wanting to secure properties with stable, long term income, in a steadily growing economy are coming in as they see the opportunity to improve their returns.

Prospects for 2016 are positive given the projected economic growth of the country is forecast to be one of Europe’s top performers this year, but also the availability of quality product and the still significant yield spread between Romania and Poland or the Czech Republic.

“Prime yields drop with 25-75 bases points in 2015, but for the first part of 2016 we are not estimating the same decrease. Financing conditions have improved compared with last years but interest rate are still over those from Czech and Poland. This is the reason why Romania will attract most investors with own equity or which have capacity to find financing at the regional level,” said Andrei Vacaru, Capital Markets, JLL Romania.