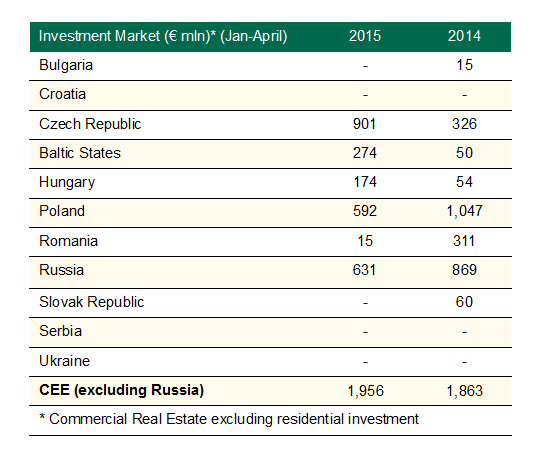 According to the latest research from CBRE, Central and Eastern European commercial real estate investors are increasingly moving away from the traditional, single-asset transactions. A trend that started in 2014, and continued in the first four months of 2015, is the significant increase in the amount of platform deals and corporate activity via OPCO / PROPCO structures in the CEE region.

Mike Atwell, Head of Capital Markets, CEE at CBRE commented: “The key driver of this move is the abundance of equity in the market invested via, in particular, private equity houses willing to go big, quickly. Platform acquisitions and corporate takeovers provide the opportunity to succeed on this strategy and are possibly less competitively priced than traditional single assets and / or smaller portfolios in the market.”

CBRE’s research shows that although interest in CEE commercial real estate is still high, scarcity of available product in certain markets, particularly Poland, is putting some constraints on the amount of investment activity. This lack of stock, however, is resulting in more deal flow into other parts of the region, particularly in the Czech Republic which has seen investment volumes from January to April this year increase to €901 million, compared to €326 million for the same period in 2014. Hungary has also benefitted with €174 million of commercial real estate investment in the first four months of this year (Jan-April 2014: €54 million) and, to a lesser extent the Baltics and Romania.

Jos Tromp, CBRE’s Head of Central & Eastern Europe and Africa Research, added: “Commercial real estate investors continue to look for opportunities in Central and Eastern Europe, with an increasing amount of countries in the region benefitting. We believe that this will continue throughout the year as international capital continues its search for return on investment and expands its reach further afield than western and southern Europe. However, actual volumes from year to year may fluctuate as deals tend to be ‘chunky’, for example the Palladium Shopping Centre in the Czech Republic sold for c. €570 million, representing 63 percent of the country’s total volume. Overall, we believe we will see a further recovery of volumes, in most parts of CEE, on the back of low interest rates and improving economic fundamentals.”

In January – May 2015 investments into the Russian commercial real estate market amounted to €650 million, which is 44 percent below figures for the same period of 2014. The reasons of this situation are quite simple: geopolitical tensions and excessive volatility of the financial markets.

Investors are focused on the office segment that benefitted from €594 million inflow, or more than 90 percent off all investments into the Russian commercial real estate market. This activity is partially explained by two facts. Firstly, vacancy in this segment almost reached its expected peak level. Secondly, downward potential for rental movement is perceived as relatively small.

The situation in the retail property market is more difficult, as the depth of current negative pressure on real wages still remains unclear.

Andrey Novikov, Managing Director of Capital Markets, СBRE, said: “The relatively small transaction activity does not mean the absence of investors’ interest to the market. Today there are quite a lot of investors, including from not typical regions for the Russian market, analyzing the existing opportunities. As a result, in H2 2015 we might witness results of this interest in completed transactions. However, geopolitical situation still remains the strong factor, which can ruin these expectations.”