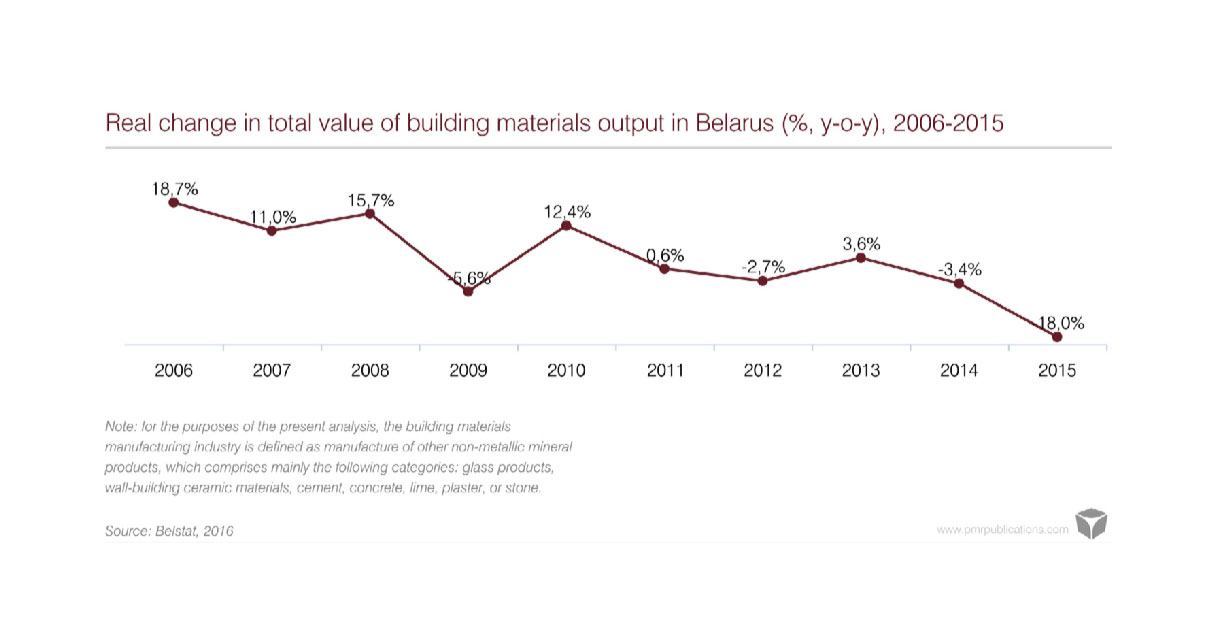 Strong growth in the residential and non-residential construction sectors in Belarus as well as the government’s determination to boost exports have provided decisive support for the cement market’s expansion between 2010 and 2014, but the positive trend did not continue in 2015. Cement production came to 5.62 million tonnes in 2014, the highest level ever seen in Belarus, whereas in 2015 it saw a slump of more than 17 percent.

Foreseeing increasing demand for cement, Belarus launched a large investment programme to modernise and expand its cement production capacity. Since 2008, over $1.3bn has been invested in the modernisation and expansion of the country’s cement industry. Currently there are three cement producers in Belarus: Krasnoselskstroymaterialy (capacity – 3.6 million tonnes per year), Krichevtsementnoshifer (capacity 3.5 – million tonnes per year), Belarusian Cement Plant (capacity – 3 million tonnes per year). Over the last few years, cement production capacity in Belarus more than doubled, increasing from 4.6-4.7 million tonnes per year at the end of 2011 to around 10 million tonnes in 2014. However, the recent development of the country’s cement industry has generated many financial difficulties to domestic cement companies. The modernisation required a total investment of more than $1bn, which was mostly covered by loans from Chinese investors. Financial difficulties for the three cement producers in Belarus have been growing mostly due to the failure to increase exports, the national currency’s devaluation, as well as due to the falling demand on the domestic market.

Even though Belarusian cement companies have rolled out modernisation projects only recently, their production can hardly compete with cement manufactured in Ukraine or Russia. Cement production came to 5.62 million tonnes in 2014, the highest level ever seen in Belarus, whereas in 2015 it saw a slump of more than 17 percent.

Belarus’s ceramic tile industry has also been on the rise. Steady growth has taken place in the residential and non-residential construction sectors, fuelled largely by the government’s determination to reduce the gap in residential space per capita between Belarus and developed countries. In 2015 ceramic tile production contracted by more than 11 percent, and it is expected to contract by another 9-10 percent to about 21 million sqm in 2016. Still, as it has been for many years, the majority of tiles made in Belarus will be exported.

Strong growth in the residential construction sector in Belarus has provided a large amount of support for the expansion of the building material market in recent years. The total floor space of residences listed in official records between 2013 and 2015 expanded at a CAGR of 4.1 percent. Per capita housing stock in Belarus is estimated to have reached 26.5 sqm in 2015, still below the level recorded in most European countries, where the figure exceeds 30 sqm.

In recent years many infrastructure development programmes have been launched in Belarus, highlighting the government’s continuing commitment to the provision of growth drivers for the construction sector in the coming years. Another notable trend that will help construction in the future has been the government’s increasing openness to FDIs and privatisation, as the public sector will be unable to cope with the multi-trillion rouble investment required for infrastructure projects across the country that will support at least moderate economic growth rates. Furthermore, in the last few years Belarus has claimed a certain level of improvement in its dealings with the European Union, particularly after the mediation of the Ukraine peace talks, prompting EU officials to say publicly that they have been seeing an opportunity to broaden and deepen relationships with Belarus. Recently, the European Union and United States announced that they would temporarily ease some sanctions on Belarus.

From 31 October 2015, the EU suspended for four months the asset freeze and travel ban applying to 170 individuals, including on President Alexander Lukashenko, and the asset freeze applying to three entities in Belarus. From the same day, the US has allowed most transactions with nine sanctioned entities (OJSC Grodno Azot, OJSC Grodno Khimvolokno, OJSC Polotsk Steklovolokno, Belneftekhim, Belneftekhim USA, OJSC Belshina, OJSC Lakokraska, OJSC Naftan) in Belarus, in light of the context of improving relations between the EU and US with Belarus.