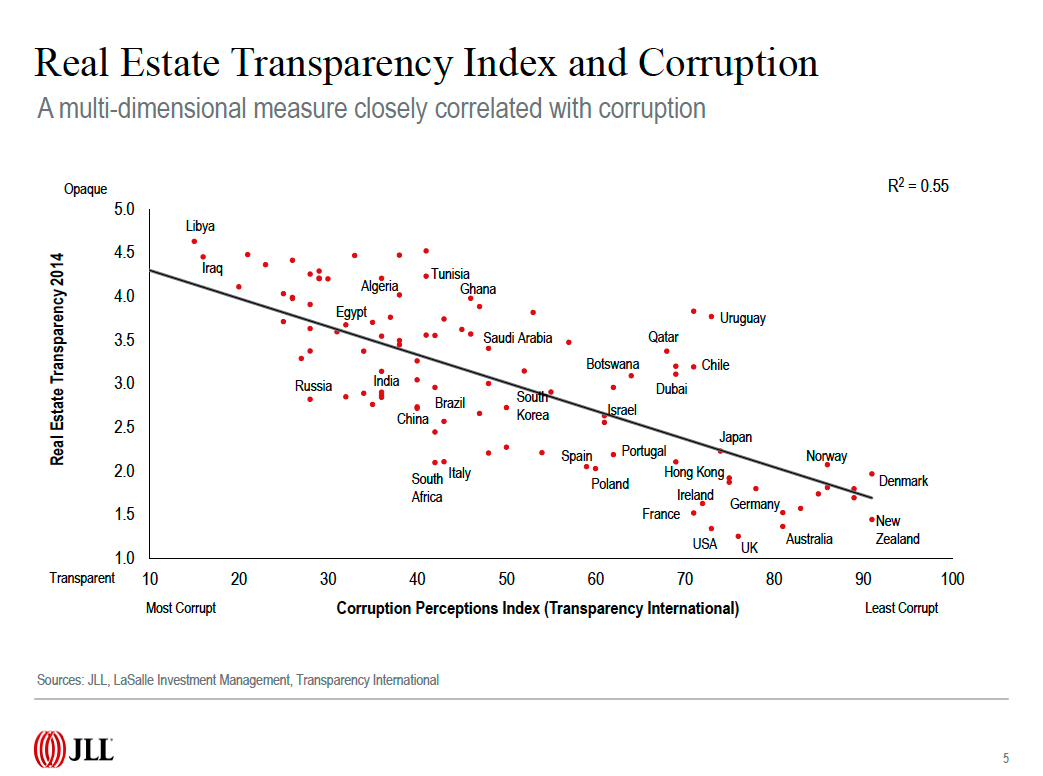 Global Real Estate Transparency Index 2014 shows that CEE countries significantly improved their position in the ranking. Poland has gone up to 17th position and is ranked higher than Spain, Norway, Austria and Italy. The most transparent market in the world is the United Kingdom, the least – Libya. Over 80 percent of markets have registered improvement since 2012.

According to the 2014 release of JLL and LaSalle Investment Management’s biennial Global Real Estate Transparency report, over 80 percent of the analysed markets have registered improvements in transparency since 2012. According to the research paper, the world’s most transparent markets are the UK, US, Australia, New Zealand and France. The greatest improvements were registered in Kenya, Qatar, Ghana, Nigeria and Romania.

The 2014 Global Real Estate Transparency Index calculates transparency in 102 countries by weighting 115 factors, including: access to data, performance measurement and governance of listed vehicles. The index provides investors and corporate occupiers with data and analysis critical to transacting, owning and operating in global markets. It also assists governments and other industry organizations interested in improving transparency. JLL has been tracking the progress of real estate transparency since 1999. The Index has highlighted how improving transparency has gradually rippled into new markets – from US, Australia, Canada or Western Europe, through Southern and Central Europe, Middle East, the BRICS and MIST countries to Sub-Saharan Africa – as each has emerged as destinations for cross-border capital and corporate occupiers.

Among key findings from the 2014 report: The world’s most transparent markets are UK, US, Australia, New Zealand, France, Canada, Netherlands, Ireland and Finland. These countries are in the “highly transparent” category, which is still dominated by Anglophone markets. In 2014 report, Ireland is also included in this category.

Top improvers are Kenya, Qatar, Ghana, Nigeria, Romania, Zambia, Mauritius, Algeria, Colombia, and Kazakhstan. This group is dominated by Sub-Saharan Africa. However, while progress is being made across the continent, much still needs to be done. Colombia and Peru are the biggest movers in the Americas.

Central and Eastern Europe is driving improvements on the continent. Among the top improvers in 2014 are Romania and Serbia, while Poland remains the most transparent market in the region (ranked 17 out 102 countries included in the analysis), followed by the Czech Republic and Hungary, who maintained good performance in the real estate market transparency.

The least transparent markets are Libya and Senegal. Only in a handful of markets has transparency actually worsened. These include Ukraine, highlighting how political uncertainty can quickly undermine transparency levels.

Across the globe, key drivers of transparency improvement include a rise in cross-border investments fuelled by more robust real estate markets; governments’ recognition that poor transparency affects investment and quality of life; return of stronger economic growth and improvement in market fundamentals; media spotlight on corruption, scandals and building accidents; Millennials’ expectations regarding transparency; a rising culture of “open data”, and a wider adoption of sustainability tools. Other factors, depending on the country or region, include extension of REIT structures, the enhanced role of financial regulators and the unexpected power of sporting events.

In the last 10 years, Central and Eastern Europe has seen a significant improvement in transparency. Poland, the Czech Republic and Hungary are the top improvers over the last decade, moving from semi-transparent to transparent in the JLL ranking. The most spectacular jump in 2014’s rankings was registered in Romania (up 10 places to 30th position).

Kevin Turpin, Head of Research CEE, JLL, commented: “In Europe, it is once again the Central and Eastern European sub-region that has seen the greatest shifts in transparency. Poland is the most transparent country in the CEE, followed by the Czech Republic, which maintained its position. Romania is particularly interesting, as it has shown a particularly strong improvement, with EU legislation being more firmly enforced as well as evidence of the country’s ongoing efforts to fight corruption and increase the efficiency of the judicial system. Hungary, the third market in Central and Eastern Europe in terms of transparency, also enhanced its position in the global ranking. Slovakia, Croatia and Serbia have also improved.”

The cross-border catalyst
The 2014 results confirm the relationship between investment and transparency. Cross-border activity is a key driver of improvement in market transparency. Rising levels of transparency are associated with higher levels of direct foreign real estate investment, a powerful incentive for encouraging the free flow of information as well as the fair and consistent application of local property laws.

Jeremy Kelly, Director, JLL Global Research, said: “The top improvers in each cycle generally correlate with a surge in foreign direct investment, as investors push through transparency reforms and because governments quickly realize that poor transparency will deter continued inward investment. Kenya is a great example. It saw a spike in FDI projects in the last year, and not coincidentally, made the greatest leap in real estate industry transparency this year.”

Interestingly, several countries that have featured among the top improvers in previous surveys appear to have lost some impetus and have been treading water over the last couple of years. Poland, which has gone up two places to 17th position, and is considered a transparent market, is an example. This slower pace of transparency change could be attributed to the fact that many cross-border investors have demonstrated overall satisfaction with the current level of transparency in Poland, taking the pressure off further improvement.

Tomasz Trzósło, Managing Director JLL Poland, Head of Capital Markets Poland, added: “Factors such as joining the European Union and legislation changes, along with the good macroeconomic conditions, wider access to market data and advanced broad market analyses are factors that have helped Poland enhance its position as a secure and stable market with strong fundamentals. Over time, Poland has been attracting more interest and gaining more trust from foreign investors. Now, it is the key location for many international players; offering both opportunities to further develop their investment portfolios, and high liquidity. One of the key factors enhancing Poland’s attractiveness on the international investment map is the level of transparency, which is now comparable to Western Europe.”

In the next few years, factors driving transparency across the globe will be: the increasing role of social media, crowd sourcing and technology, rising expectations from the’ Millennial’ Generation and greater use of sustainability tools. JLL also forecasts further boosts in Sub-Saharan Africa and fresh impetus in the BRICS.