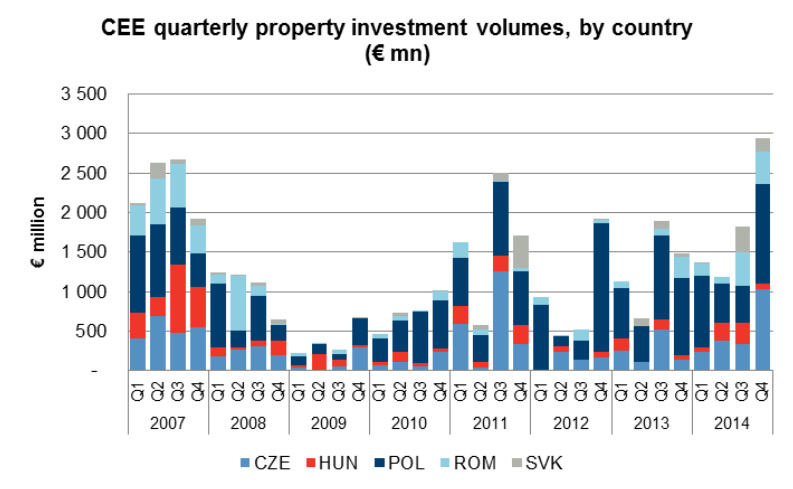 According to Cushman & Wakefield investment activity in the core Central European markets of Poland, Czech, Slovakia, Hungary and Romania increased significantly in Q4 2014 to €2.9 billion, approaching the 2006 record levels, and ahead of the €1.8 billion invested in Q3 2014. Overall, over €7.3 billion was invested in the core CE markets in 2014, accounting for 41 percent increase on the previous year’s figure of €5.2 billion, and approaching the record 2007 levels of €9.3 billion.

Commenting on the activity in 2014, James Chapman, Partner, Head of CE Capital Markets at Cushman & Wakefield, said, “Central Europe has become an established part of any pan-European investment strategy. Warsaw has been the gateway for this but activity is clearly growing rapidly in secondary cities and across all CE countries. The region offers quality assets, large scale platforms and robust occupational markets all driven by the fastest growing economies of any European region.”

Poland delivered a strong Q4 performance with €1.26 billion transacted, reinforcing its dominance as the key destination for capital in the CE region. Overall Poland attracted €3.13 billion in 2014, improving slightly on 2013 figure. The office sector recorded the highest investment activity in Poland since 2006 while the industrial sector turned over the highest-ever transaction volume on the Polish industrial investment market. The Czech Republic experienced a 96 percent increase on 2013 volumes with €1.99 billion transacted in 2014. Romania saw the highest annual increase of 141 percent and achieved €1.07 billion in 2014. The investment volume in Hungary was at €616 million in 2014 (73 percent increase on the year). Slovakia recorded an 116 percent y-o-y increase and reached €504 million in 2014.

Performance across each of the property sectors was up, be it quarterly or annual growth, or over the long term average. Offices were the leading sectors with €2.81 billion traded in 2014 (13 percent increase on 2013), followed by retail with €2.32 billion (25 percent on 2013). The industrial market continued its impressive bull run with 470 percent volume growth over the 5-years’ average (€1.77 billion in 2014).

The largest portfolio transaction in CE in 2014 was the sale of VGP portfolio (11 logistics parks in the Czech Republic) to PointPark Properties (P3) for €523 million. The largest single property transaction was the acquisition of Rondo 1 office building in Warsaw by Deutsche Asset & Wealth Management for €295 million.

There is greater diversity of active investors across Central Europe than at any time since 2007. Groups that have been focused on the UK, France and Germany are now committing resources to CE in search of product and to diversify risk. This relates to established European and US investors but we are seeing the same apply to Asian and Middle Eastern capital.

“We forecast further investment volume growth across all CE markets in 2015. This will be combined with a continued tightening of yields in all sectors and especially in the sub-markets that are playing catch-up to Warsaw,” read the report.

In previous years investment activity in Poland was fuelled by German investment funds. US entities were the most active investors in Poland in 2014 for the first time since 2011 accounting for over 35 percent of transaction volume. 2014 also witnessed a notable increase in domestic investors’ activity with the largest Polish insurer PZU Group coming to the fore on the Polish investment market. In December the investment fund PZU Fundusz Inwestycyjny Zamknięty Sektora Nieruchomości 2 acquired Panattoni’s warehouse portfolio for €140 million, which was the biggest-ever single deal for a Polish capital group and Q4 also saw the first acquisition for REINO Dywidenda FIZ, a subsidiary of Polish group, REINO Partners.