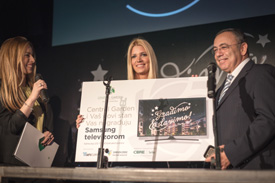 The construction of the second phase of the residential-business complex Central Garden in Belgrade, developed by investors AFI Europe and Shikun & Binui Group, has been completed before its deadline. The condominium is now richer with two new buildings housing 89 apartments and the whole complex will be completed by autumn 2018.

A moving in party for its new residents has been celebrated on the 20th of October within Factory Club in Belgrade. Investors AFI Europe and Shikun & Binui Group have once again proven to be reliable developers in Serbia, as the first and second phase of Central Garden has been completed before foreseen deadlines. Gili Dekel, partner investor of the project, thanked all those who have contributed to Central Garden’s success at the move in party. “We have achieved another major success. Central Garden is entering its final phase of development, surely becoming a magnificent condominium in the heart of the city. We are proud that the condominium concept has flourished in Belgrade and that residents now recognize its benefits,” said Dekel.