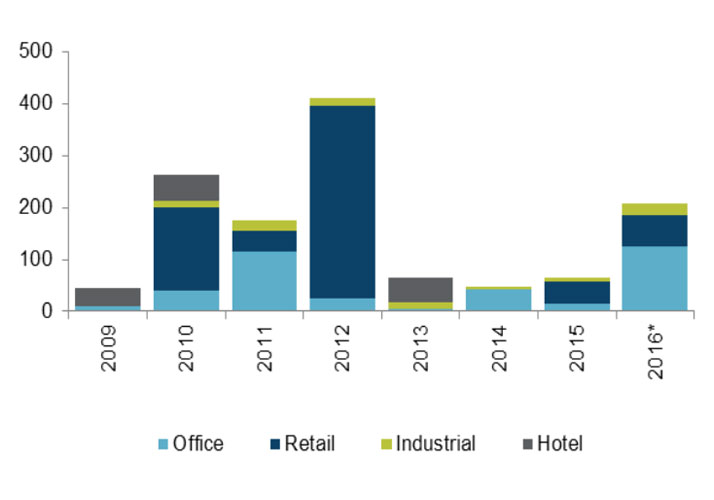 strengthened In has 1 post(s).

In the second half of 2015 investor interest to opportunities on the property market in the country strengthened.

In 2015, total secondary investment volume on the Ukrainian property market amounted to around USD 65 million compared to USD 47 million in 2014 and USD 66 million in 2013.

The figure includes the secondary investment deals, value of which exceeds USD 1 million and which were openly reported on the property market in Ukraine.

Marta Kostiuk, Head of Research and Development Consultancy at DTZ Ukraine commented: “Quality income generating office, retail and logistics properties located in Kyiv remain the most attractive investment assets in the country. Some investors are also prepared to consider good quality existing retail properties in other major cities of Ukraine, except for eastern regions of the country.”

There were 4 major secondary investment transactions reported in property sector in Ukraine in the first half of 2015:

Petricol Investment acquired the shopping and entertainment centre ‘Kvadrat’ on Perova Boulevard on the eastern bank of the Dnipro River in Kyiv. Total area of the property extends to around 41,000 sqm, and its GLA is 19,100 sqm. Petricol Investment is also owner of the shopping and entertainment centre ‘Komod’ and the retail centre ‘Kvadrat’ near the metro station ‘Lukyanivska’, both in Kyiv. The deal structure is confidential.

The 1,000 sqm business centre at 30 Fizkultury Street in Kyiv is known to have changed hands in the first half of 2015. The deal volume is estimated at around USD 1.7 million.

A Ukrainian company acquired an 11,000 sqm pharmaceutical warehouse in the Greater Kyiv area for owner-occupation purposes. The deal volume is estimated at USD 2.4 million.