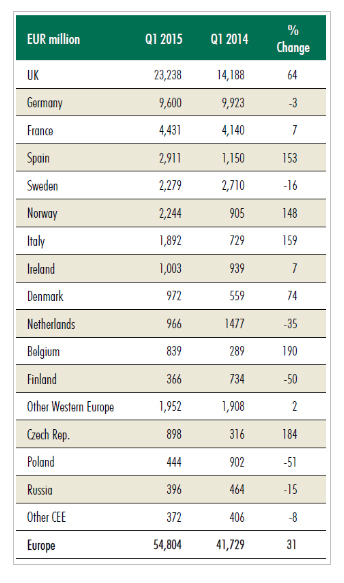 According to the latest research from CBRE, European commercial real estate investment activity in Q1 2015 totaled just under €55 billion, an increase of 30 percent compared to the same period in 2014.
Jonathan Hull, Managing Director, EMEA Capital Markets, CBRE, commented: “The first quarter of this year was the highest Q1 total since 2007, when European investment volumes reached €60 billion. It is notable that there has been a significant rise in the number of portfolios being brought to the market, a sign that European commercial real estate is experiencing increased liquidity and investors are starting to seek economies of scale. There is also a growing trend, particularly amongst private equity firms, for platform acquisitions and corporate takeovers. All of these are helping to drive up total activity across the region.”

The UK contributed a substantial proportion (42 percent) of the growth in investment activity recorded in Q1 2015, helped by the weakness of the euro. Investment in southern Europe also continues to grow strongly. Activity in Spain remains at a very high level, the four quarters to Q1 2015 represent its highest ever 12-month total for investment turnover. Investment in Italy is also continuing to increase, with Q1 2015 turnover of €1.9 billion, 159 percent higher than in Q1 2014. Portugal too has seen significant growth in investment activity, €218 million in Q1 2015 compared to just €31 million in for the same period in 2014.

Investment in Central and Eastern Europe remains somewhat constrained, with political and economic issues around Russia continuing to be an issue for investors. The Czech Republic, however, has been an exception to this trend.

Michael Haddock, Senior Director, EMEA Research, CBRE, added: “Despite the fact that CEE showed up as an area of strong interest from global investors in our recent Investor Intentions Survey, the level of activity remains subdued when compared to the long term average. However, in contrast to the regional trend, investment in the Czech Republic has been increasing. Q1 2015 was its third successive total above €800 million, double the country’s 10-year average of under €400 million per quarter.”

Elsewhere in the region, Belgium and Norway (alongside Spain, Italy and the Czech Republic) saw the greatest increases, with both seeing investment volumes 140 percent higher than their Q1 2014 totals.

Valentin Gavrilov, Director of Research, СBRE in Russia, said: “Over the last few years Russia was claiming one of the top 5 active investment destinations in Europe. In 2014 – 2015 investment activity significantly declined under the influence of geopoiltical issues. Its size in Q1 was smaller than even in some countries of the Eastern Europe, such as Poland and the Czech Republic. However, we expect a recovery in investor interest to the Russia commercial real estate assets in the mid-year run. In 2017 investments might exceed €6-7 billion mark.”