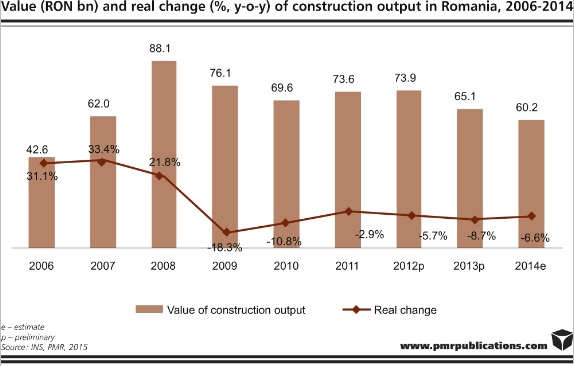 Construction activity in Romania will accelerate in the coming years – EuropaProperty

As indicated by the results of PMR’s latest report, entitled “Construction sector in Romania 2015. Development forecasts for 2015-2020”, in 2014 the construction industry in Romania continued to struggle, and was estimated to have contracted by 6.6 percent year on year, after a probable 8.7 percent reduction recorded in 2013.

According to PMR, the fall in total construction output last year was caused entirely by the weak performance of the civil engineering subgroup, which fell year on year by almost 23 percent. The slump in civil engineering activity could not be counterbalanced by a 7.8 percent upsurge in residential construction output and a 4.6 percent increase in non-residential construction. In 2013 and 2014, the construction industry in Romania continued to suffer, mostly because of the substantial reduction in support from the public sector. The parliamentary election held in December 2012 was won overwhelmingly by a coalition led by the centre-left Social Democrats. In 2013-2014, the Social Democrat-led government prioritised social incentives and populist rhetoric at the expense of capital investments, despite the fact that GDP expanded by 3.4 percent in 2013, followed by a 2.8 percent increase last year. It is thought that the government has deliberately reduced capital investments in recent years, in order to have more financial resources to increase benefits to the population, which were ultimately to help to improve the ruling coalition’s standing prior to the crucial presidential election held in November 2014.

The current government, led by the same the Social Democrat Prime Minister which lost the 2014 presidential campaign, is poised to boost capital investments in 2015 and 2016, particularly in motorway projects, in order to improve the ruling coalition’s standing prior to the parliamentary election scheduled for late 2016. The coalition aimed to win the presidential election which was held in Romania in November 2014 mostly by boosting social benefits at the expense of capital investments, but ultimately failed to prevail. It is believed that the Social Democrats desperately needed to win the presidential runoff in order to curb the anti-corruption crusade which has gained pace in Romania. In order to eradicate this belief during the 2016 parliamentary campaign, the Social Democrats will have to boost the anti-corruption fight, or at least avoid obstructing it.

The right and centre-right electoral force is dominant in Romania, a fact confirmed by the result of the recent presidential election, and the current left-wing government is, therefore, constrained to implement more “liberal” incentives, particularly boosting investments in infrastructure projects, and legal changes in order to increase its approval among centre-right electors. The results of the recent election reveal that, along with eradicating corruption and several other controversial topics, the development of the country’s infrastructure will remain of major interest to Romanians in the next few years.

In early 2015 the government already approved few legal changes that should provide a positive upshot to construction activity in Romania in the coming years:

Hotel construction activity is expected to increase in 2015, fuelled in part by the government’s decision to reduce VAT on tourism services from 24 percent to 9 percent.

VAT rate on all food products, not only the five basic items, but all agri-food products in Romania, will be also reduced from 24 percent to 9 percent in June 2015, and this should boost consumption and, consequently, retail property construction.

In 2015, the government launched an ambitious strategy for the construction of motorways between now and 2030.

For 2015 the government has budgeted 20 percent more funding than the amount consumed in 2014 for Prima Casa support warranties.