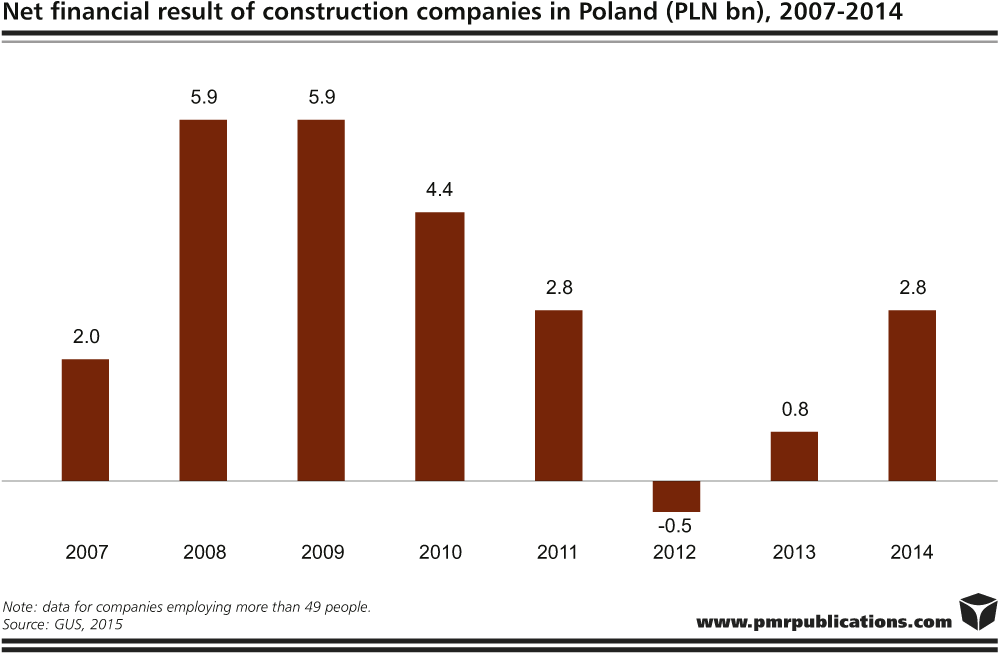 The construction industry is poised to see continued growth in 2015. Civil engineering will be the primary force behind the construction sector’s growth, driven by increased construction activity in EU-funded projects reaching completion, in particular in the railway and water and sewage construction segments. Investments in the industrial segment will also play a crucial role in driving the sector’s growth. As a result, the 2015 performance is likely to deliver output figures close to levels recorded in 2012. However, the record output of 2011 is unlikely to be surpassed until 2017-2018.

After the marginal growth recorded in 2014, the outlook for 2015 and 2016 is slightly more positive, according to the findings of PMR’s latest report entitled “Construction sector in Poland, H1 2015 – Development forecasts for 2015-2020”.While the industry will grow, it will expand at a single-digit rate. The absence of a strong investment incentive, similar to the role Euro 2012 played several years ago, will result in a more even distribution of projects over time. And this is why PMR analysts do not expect any dramatic upsurge in investment activity in the coming years but they rather anticipate a stable stream of new investment projects until 2022. The trend has already been seen in 2015 in the road construction sub-segment where investment projects start more slowly than expected.

PMR analysts believe that 2015 will be marked by intensive work on numerous construction sites previously plagued by delays, which obtained financial support under the EU programming for 2007-2013. The last period for the settlement of the previous financial perspective will be also a preliminary phase of preparation and steady implementation of new investment tasks co-financed from the new EU financial framework.

The market will be characterised by high volatility in the coming years and diverse sub-segments will drive the construction industry’s growth in the forthcoming period. For instance, temporary declines can be expected in railway construction and water and sewage construction in 2016, mostly due to the transition between the previous EU budget and the new financial framework. The downswing will be offset by a hike in output generated by road construction and power construction, given that numerous contracts for projects in these market segments have already been awarded while a new portion of orders are in the tender phase.

As far as non-residential construction is concerned, following three years of slight declines, the segment is expected to start growing moderately again in 2015, mostly on the back of rapid growth in industrial and hotel construction sub-segments and, potentially, in the office construction segment. The growth will still be largely fuelled by robust data on building permits issued in 2013. However, the drop in the number of building permits in 2014 will have a more profound effect the non-residential market only in 2016.

What’s important to construction companies, the effects of the earlier recovery measures in the construction industry could clearly be seen already in 2014. Construction contractors’ net financial profit stood at PLN 2.8 billion (€0.7 billion). It was in line with the performance reported in 2011, which was characterised by record output, though contract profitability was at a lower level. This, however, was still well below the levels seen in 2008-2010.

Despite the improving market situation, there are still numerous contractors which are in a bad financial position or go through restructuring measures. However, there are growing numbers of companies to which 2014 was one of the best years in the history and of those which expect major improvement in terms of financial standing in 2015. These trends are confirmed by the data on backlogs of orders, which, at worst, remain flat for the major market players.