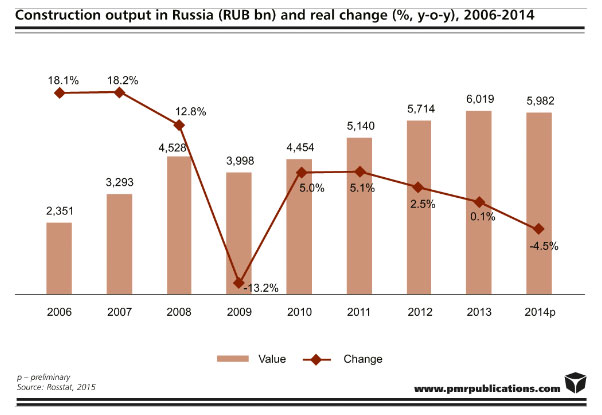 Construction industry in Russia to resume growth in 2016 – EuropaProperty

As indicated by the results of PMR’s latest report, entitled “Construction sector in Russia H1 2015. Development forecasts for 2015-2020”, the Russian construction industry has recorded a substantial deterioration in the last couple of years. According to preliminary data, Russian construction output contracted by 4.5 percent year on year in 2014, after the 0.1 percent expansion achieved a year before.

In 2014 the industry’s growth performance deteriorated significantly. According to PMR, the key factors contributing to the decline in construction activity in the last few years are:
Weak economic growth, with the GDP growth rate falling to 0.6 percent in 2014 from 1.3 percent a year earlier and expected to contract more than 3 percent in 2015.

Lack of growth in fixed capital investments, which underwent a 2.7 percent year-on-year decline in 2014, following a weak 0.8 percent growth recorded a year before. This indicator expanded by 10.8 percent and 6.8 percent in 2011 and 2012, respectively. Among the key factors that contributed to the decline in fixed capital investments in 2014 were the rouble’s double-figure devaluation, which has made imports significantly more expensive, the sharply deteriorating macroeconomic performances in Russia and negative revisions for economic development in the near future.

In addition, construction output in the Urals Federal District fell by around 5 percent last year, mostly because of a reduction in investment in oil and gas, and in electricity generation infrastructure-related projects. The key impediments to civil engineering construction output in 2014 included the following factors:

the federal road fund’s budget came to RUB 536 billion (€10.6 billion) in 2014, whereas a year earlier the figure was RUB 525 billion, a more than 2 percent year-on-year contraction in real terms in 2014 the RZhD’s investment budget for infrastructure projects was expected to fall 15 percent short of the figure seen a year earlier in 2014 oil and gas companies started to cut previously planned investment programmes, mostly because of the deteriorating fund-raising environment for Russian energy companies in the wake of industry-specific sanctions imposed by the developed countries, along with the substantial devaluation of the rouble, which eventually made the import of technologies more expensive.

The government-targeted programmes aimed at modernising the country’s transport, energy and social infrastructure have played an important part in the construction industry’s evolution in recent years. Multi-billion projects implemented as part of the preparations for the 2014 Sochi Winter Olympics also provided a considerable boost to the market. In addition, a steady increase in real disposable personal incomes has supported a steady improvement in residential construction.

According to PMR, the construction industry in Russia is projected to resume growth in 2016, mostly thanks to the following factors:
low base effect created after a notable contraction in 2015 preparation for the 2018 FIFA World Cup will start to go through the active stages of many of its large-scale infrastructure projects in H2 2015 the inflation in Russia will start to ease gradually, thus creating background to the Central Bank for further rate cuts which ultimately will encourage banks to offer less expensive loans.

Furthermore, political tensions between Russia and the developed countries are expected to ease gradually from 2016 onwards, with Russia being more interested in improving deteriorating relationships, as oil prices will not rebound to triple-figure values in the near future. Oil prices are of critical importance for the Russian economy. The country’s federal budget for the period 2015-2017, originally approved in November 2014, was based on a predicted average price of about $96 per barrel for the period in question, and the budget deficit was expected to be maintained at 0.5 percent of GDP in 2015 and 0.6 percent for the following two years. However, oil prices are expected to fluctuate mostly in the $45-65/barrel range in 2015, with a year-on-year increase in the average price of up to 10 percent in 2016. Low oil prices in the next few years will “consume” more than half of the government’s current foreign currency reserves by the end of 2016 because of the necessity to fill gaps in the budget. The Central Bank’s foreign currency reserves are expected to dwindle further, and by the end of 2015 these will have fallen most likely to $310-330 billion, down from about $500 billion at the beginning of 2014. All of these factors will, to some extent, force the Russian political elite to improve relationships with the developed countries, which are considered prerequisites to regaining access to long-term international funding.