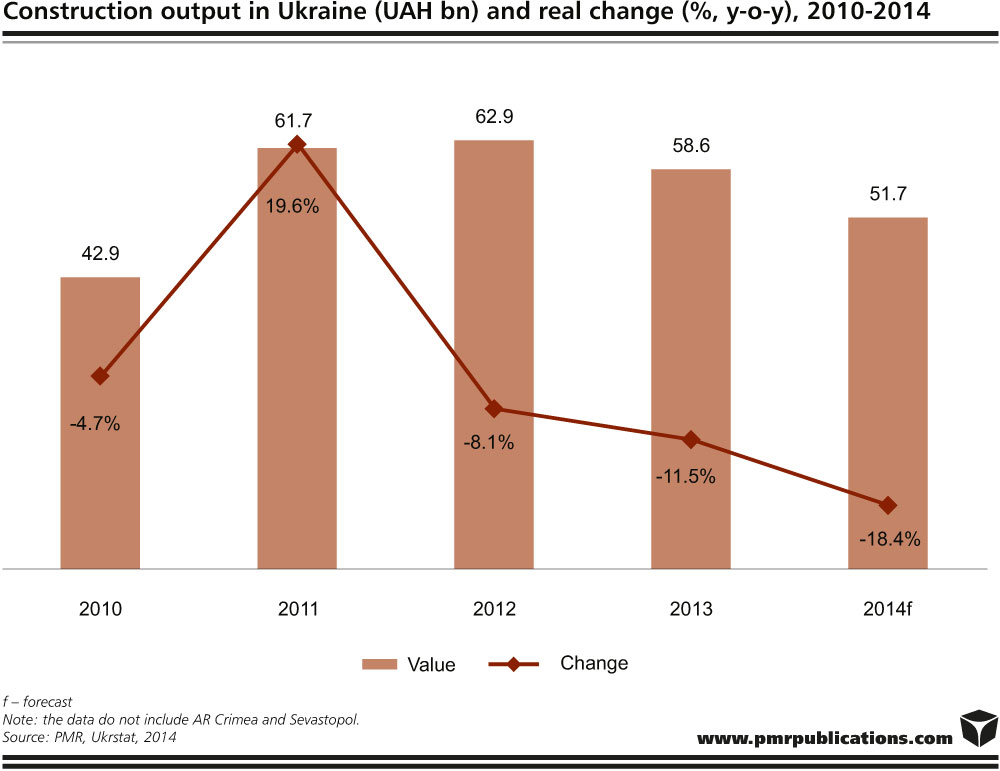 Construction industry in Ukraine to plummet 18 percent in 2014 – EuropaProperty

As indicated by the results of PMR’s latest report, entitled “Construction sector in Ukraine H2 2014. Development forecasts for 2015-2020”, between 2008 and 2013, the Ukrainian construction industry expanded year on year in real terms only once, in 2011, when it boasted a double-figure increase. In 2014 the industry is set to fall again, this time by about 18 percent.

The construction industry contracted by almost 12 percent last year. The bleak macroeconomic climate, with a zero GDP growth rate recorded in 2013, forced the government and local administrations to rein in proposed spending on many civil engineering projects, given that Ukraine’s national budget for 2013 was based on projected GDP growth of 3.4 percent. In addition, concern about a possible devaluation of the national currency were keeping lending costs at levels which were difficult to afford, and even a CPI deflation figure was observed in Ukraine last year, factors which did not encourage property developers to speed up construction activity.

In 2014, the implementation of all ongoing and planned construction support programmes was cancelled or faced substantial reductions. This year construction activity in Ukraine has been severely affected by the annexation of Crimea and Sevastopol by Russia, and the crisis in eastern Ukraine has thrown the economy even deeper into crisis. A 35 percent average devaluation of the national currency against the dollar and 33 percent against the euro in the first eight months of 2014, a 7.7 percent CPI inflation figure during the period in question and an expected GDP contraction of more than 6 percent this year have severely affected non-residential and civil engineering construction.

In 2013 civil engineering construction output is estimated to have contracted by 17.3 percent, if data for Sevastopol and Crimea are not taken into account. According to PMR, the lacklustre performance recorded in last year is projected to be followed by a more severe decline in 2014, with a 21 percent, reduction, essentially reflecting the lack of economic growth in the country and a reduction in spending on transport infrastructure development projects.

In 2014, €1.4 billion was allocated to Ukravtodor from the state budget, with 75 percent of this to be used to honour bank loan payments and only €175 million to be spent on road projects. Furthermore, there are plans to rely on an additional €258 million attracted through state-backed bond placements and another €143 million to be drawn from international financial institutions. Overall, about €577 million is to be spent on national road projects in Ukraine in 2014, accounting for about one-fourth of the planned average annual allocation for the road development programme for 2013-2018.

During the first half of the year, only about 95,000 sqm of GLA in three new shopping centres and one extension were activated across the country, excluding the second stage of Southern Gallery (19,700 sqm) shopping centre completed in Simferopol (in Crimea). It should be noted that because of the still subdued macroeconomic data in Ukraine, the completion of a substantial number of shopping centres initially due to be activated in 2013-2014 has been postponed until 2015, at least.

The property market, to which the banks are highly exposed, has struggled to gain momentum largely because of the limited fund-raising opportunities and deficient purchasing power of the population. The legacy of past cautious lending to property companies has yet to be improved and, along with the poor GDP growth figures (a contraction in excess of 6 percent in 2014, because of the absence of economic growth in 2012 and 2013) and a more than 30 percent devaluation of the hryvnia, local banks will remain reluctant to increase funding for property developers in the short term.

The total floor space of residences put into use in 2013 was increased slightly year on year by 1.8 percent to 9.95 million sqm, excluding completed housing space in AR Crimea and Sevastopol, thus almost matching the highest figure in twenty years which was recorded in 2008. However, it should be remembered that of the total floor space commissioned in 2013, 24.5 percent (2.44 million sqm) of all newly registered housing space was based on the Temporary Order and the remaining, 7.51 million sqm, was accounted for by properties completed in 2013. The new supply in 2013 increased by 18.3 percent in year-on-year terms, although the total space registered in 2013 expanded by only 1.8 percent year on year.

Residential construction in Ukraine is expected to continue to increase in 2014, regardless of the crisis in eastern Ukraine and its impact on the economy, albeit at a more modest rate than in the first six months of the year. In H1 2014, the amount of newly registered housing space stood at 4.1 million sqm, 28.7 percent more than the figure achieved in the corresponding period a year earlier, with 53 percent more new space being completed in H1 2014 than during the first half of 2013. According to PMR, in 2014 the amount of newly registered residential space is expected to be about 10.3 million sqm, surpassing the performance achieved a year earlier by 3-4 percent. This significant slowdown for the full year will largely reflect the crisis in the Donetsk and Luhansk Provinces and the consequences for the overall economy, which is likely to contract by more than 6 percent.