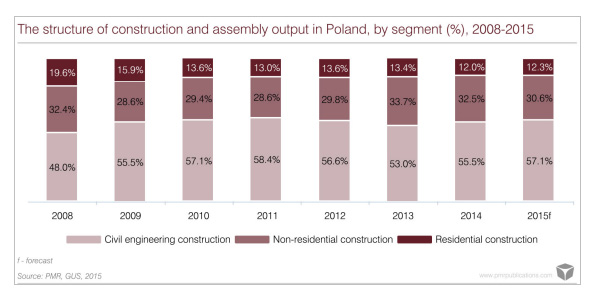 In 2015 the pace of the construction industry’s growth will only slightly exceed last year’s growth as it will be approximately 6 percent. The projection is 3 percentage points lower than our expectations from the beginning of 2015. PMR anticipates that the industry’s performance in 2015 will be driven by increased growth in the second half of the year.

PMR projections for 2016 are more optimistic – the construction industry can expand at a rate of 8 percent, while the value of construction output can reach approximately PLN 101 billion, which, however, is still below the record-level recorded in 2011. On the other hand, construction output generated by companies employing more than nine employees should eventually top the 2011 output on the back of the 2017 growth, driven mostly by a multitude of large-scale road contracts. The market may still see modest growth in 2018, but we believe there can be a single-digit correction in the construction market commencing from 2019.

Importantly, the absence of a strong investment incentive, similar to the role Euro 2012 played several years ago, will result in a more even distribution of projects over time. And this is why we do not expect any dramatic upsurge in investments and the ensuing declines in the double-digit range in the coming years but rather a stable stream of new investment projects right until 2022.

As in the previous waves of the survey, experts from the construction industry were asked to identify the most attractive segments of the construction market taking into account a 24-month time horizon.

As was the case last year, respondents would indicate three segments: road construction (45 percent, compared to 43 percent in last year’s wave of the survey), power construction (39 percent, compared to 44 percent in the corresponding period of 2014) and railway construction (34 percent vs 30 percent a year ago). The new EU multiannual financial framework for 2014-2020, which provides for substantial spending on infrastructure projects (in particular in the segment transport), had a considerable effect on perceptions of these segments.