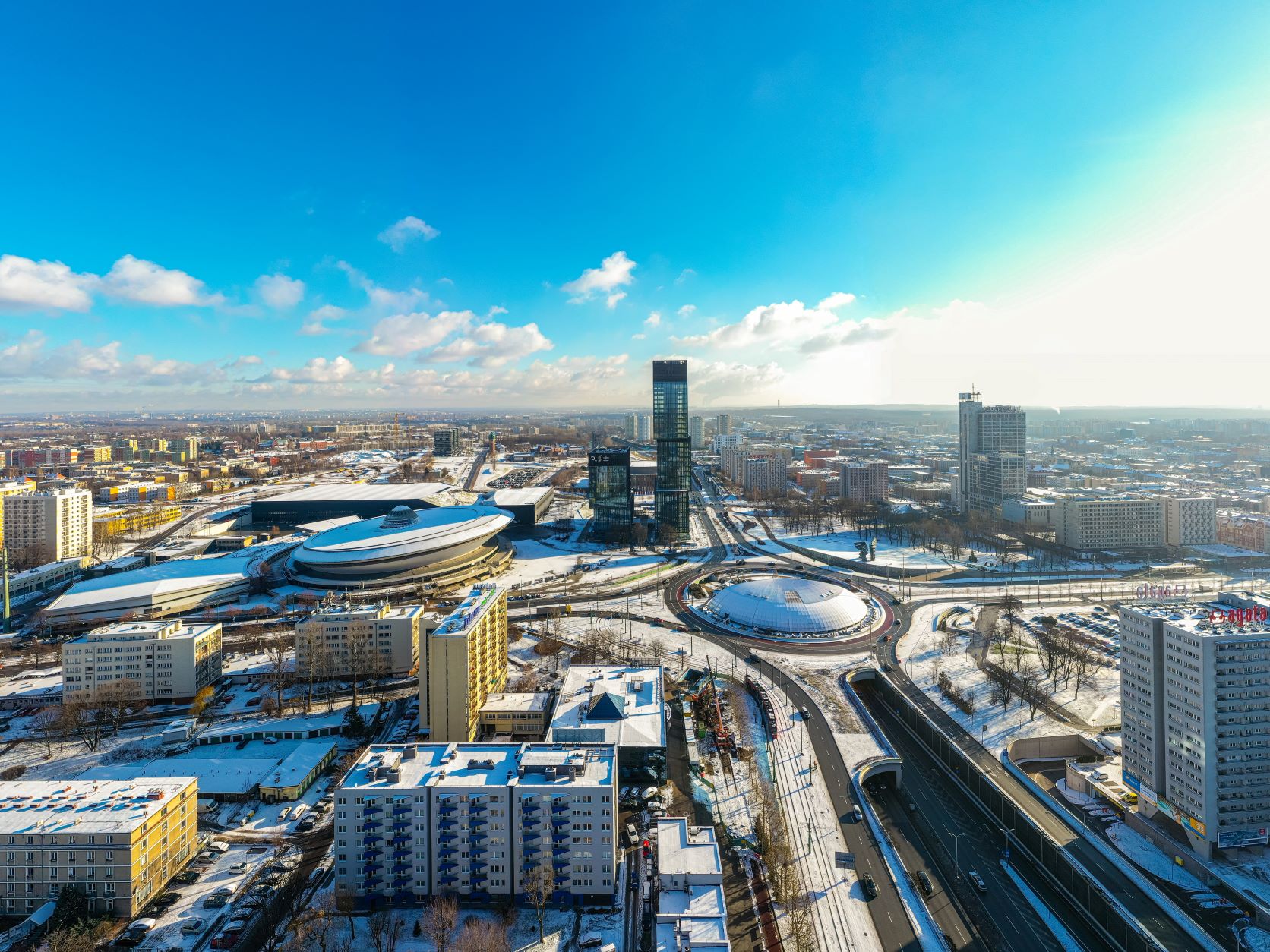 Nearly 2.5 years after the commencement of the .KTW II project, the office building obtained an occupancy permit. Preparations are currently underway to start fit-out work in the lease area. Thus, the six-year project of the .KTW office complex, the flagship investment of TDJ Estate, consisting of two buildings located next to the Spodek in Katowice, will soon be finalised.

The occupancy permit obtained for .KTW II was preceded by a number of completed inspections and expert reports. The positive opinions of the State Fire Service and the State Sanitary Inspection confirmed that the facility was constructed in compliance with the building permit design. The 133-meter-high office building is today the tallest office building in the Metropolis GZM and thus the first facility of this kind in that area to undergo detailed tests and inspections.

“For us, the decision to issue an occupancy permit for .KTW II was the culmination of over two years of work on the construction of the facility. We feel great satisfaction as we undertook an ambitious and demanding task which we completed on time and within the budget. We met the challenge of constructing the first high-rise commercial building in the region, located on a small site in the city centre, without the support of the general contractor,” says Piotr Sołtysik, senior project manager at TDJ Estate, responsible for the construction of .KTW II. “The efficient management of the construction process was possible owing to the effective coordination of the work of 40 contractors, and also a bold decision to use innovative technologies. We want to thank all our partners for their exemplary cooperation. It is with the commitment of over 300 employees that we have succeeded in completing the construction project while preserving high quality and functionality, despite the COVID-19 pandemic that has prevailed since 2020.”

The tender procedure for the construction of .KTW II started in April 2019. Half a year later, two tower cranes appeared on the project site – including a crane with a lifting height of 193 meters which was manufactured in Germany on a special order basis. In April 2020, the assembly of the façade consisting of 4.4 thousand square meters of glass panels began. At the end of February 2021, the .KTW II reached its highest structural point. During the construction, 22,000 sqm of concrete and 3,500 tons of steel were used.

The construction of two structures for the overhang on floors 9 and 19, which required the development and use of complex formwork, was one of the most spectacular stages of work. The installation of a self-climbing formwork system which accelerated the construction of the reinforced concrete structure was also a non-standard solution. .KTW II is the first building in Katowice where this technology was used. The key challenges also included proper planning of the operation of cranes in connection with the construction of a plant room level on the roof (as per the planning permission, it could not be located on the first and second floors which is a common practice). Thus, the heaviest equipment, which is also the heart of the building, had to be transported to the top of the office building.

“At the .KTW II construction site, the Gleeds Polska team supervised the project implementation process. The building fits perfectly into the urban space and adds new value to the image of Katowice while setting new trends in its category. We are proud that Gleeds was able to draw on their experience in the office sector and participate in the implementation of this prestigious project carried out in compliance with the principles of sustainable construction,” comments Adam Horak, Gleeds Polska, Head of Katowice Office, Associate Director.

All activities taken at the construction site were carried out in compliance with the highest safety standards, as evidenced by the “Build Safely” statuette awarded to .KTW II by the National Labour Inspectorate. The office building has also received the BREEAM Interim Design Stage certificate at the Excellent level which confirms that the facility was designed in accordance with the principles of sustainable construction and responsible management systems. The score of 79.7 percent is one of the highest ones awarded in the Katowice office market. Modern systems and installations were also implemented in the office building in accordance with the WELL Health-Safety Rating standards, so that in the future .KTW II could also obtain a certificate confirming the highest facility standards in terms of care for the health of its users.

“.KTW II, similarly to its older brother, is a synonym of modernity, high quality and attention to every detail at all stages of design and construction. It meets all the requirements set for top-class office buildings which place it at the forefront of the most interesting commercial facilities in Poland and CEE. From the very beginning, we focused on the needs and expectations of future users, and we believe that the solutions used will provide our tenants with a sense of comfort and safety, conducive to their well-being,” says Kamil Krępa, director of lease and real estate portfolio management at TDJ Estate.

.KTW I and .KTW II form an office complex connected by a three-level underground garage, located in Katowice, in the vicinity of the Culture Zone. The first facility is 66 meters high and has 14 storeys, its construction was completed in 2018 and lasted almost two years. The other one is 133 meters high, and the number of storeys is 31. The ground floor and floor +1 in both buildings have been designed for retail and service functions. In total, .KTW office buildings are responsible for the supply of 58,000 sqm of office space and 3,700 sqm of retail space.

“Six years ago, we presented the architectural concept of the .KTW complex, developed in cooperation with the Medusa Group studio, and today this vision has become reality. In the place of a demolished building, which was the former office of the Regional State Railways Directorate designed by architect Jerzy Gottfried, there are now office buildings that are distinguished by their simplicity of form and intensity of expression and which form a harmonious unity with the Culture Zone. We are proud that owing to our bold decisions, uncompromising attitude and, above all, the determined approach of people working on this project, we have completed an investment that perfectly reflects the transformation of Katowice from an industrial centre into a city of modern business services,” says Bartłomiej Solik, Managing Partner at TDJ Estate.

Currently, the interior of .KTW II is being prepared for fit-out work in the lease areas. The first tenant, PwC Service Delivery Center, will move into the building in early 2023 and will occupy nine floors.