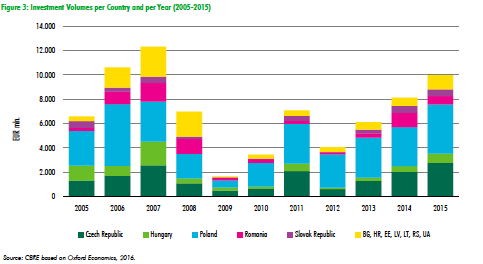 Consumer spending will drive growth and economic recovery throughout 2016 – EuropaProperty

According to CBRE’s ‘CEE Market Outlook,’ 2016 is set to be a solid year on the back of an exceptional 2015 which saw records broken in almost every real estate sector. Growth will be a key theme in the region in 2016 as economic recovery happens at a quicker pace than in Western European countries.

The dominant factor impacting the property market is consumer spending, which is currently benefiting from a host of positive factors, including low oil and commodity prices, low interest rates, falling unemployment and rising house prices. This rise in private consumption has triggered a wave of new developments, in the form of retail schemes and logistic warehouses driven by e-commerce. This consumer appetite has already led to increased turnover volumes and a stabilised operating income for retail properties, thus investment attractiveness is high. Apart from traditional destinations (such as Prague and regional Poland), Bucharest and Budapest should be on the investors list, giving a significant boost to retail investment in 2016.

As investment transactions for prime properties do not show any signs of slowing down, we might see yields moving into a new territory, beyond those from 2007. Albeit, compression will move at a slower pace than in 2015, capital value growth will be reached through cap rates compression and less through rental growth. Even in the context of yield compression, the spread compared to government bonds continues to be very generous, thus real-estate in CEE will be a solid alternative for institutional investors.

Office-wise, demand is at record levels, driven largely by IT & outsourcing occupiers, a majority of which are international. The pipeline for the entire region is at rather low levels, with two major exceptions: Warsaw has over 670,000 sqm of new space scheduled for delivery in the next two years (which amounts to 15 percent of existing stock). The other star is Bucharest, with an even higher rate of pipeline versus stock (21 percent), which will put significant pressure on net effective rents and vacancy rates.

Overall, the CEE office sector is a tenant’s market, a trend set to continue in the next 12 – 24 months. With the number of available options in the capital cities sizeable (in some cases only growing), tenants are taking advantage of good or very good financial conditions made available to them.

“We started off 2016 with a buoyant retail market and rising consumer confidence. As retail densities are already high in some markets, pipeline is limited. Only three capital cities in CEE are scheduled to see new shopping centres in 2016: one is Bucharest, another is Kyiv (where four centres are planned for opening, but delays are most likely to occur); the last is Warsaw with a new stock for 2016 of almost 72,000 sqm. Regional areas in CEE will be more active in terms of new development, most notably the 98,000 sqm scheme in Poznan; the biggest shopping centre to open in Poland in the last seven years. Pipeline is completely dry in Slovakia and Hungary. In total we expect around 972,000 sqm of new shopping centre space to come to market, which is below previous years’ levels,” CBRE said.

Overall, 2015 was an exceptional year in terms of take-up for the logistics sector, as retail logistic operators are taking advantage of the increase in consumer demand, driven both via traditional ways of retailing, but also via e-commerce. All markets record take-up levels that are well above 10 year averages, some as high as up 65 percent. Development wise, we are seeing limited speculative construction, the market is driven by built-to-suit (BTS) schemes. Exception to the rule is Poland – where almost 900,000 sqm is under construction as of early 2016.

The report highlights Hungary, as a country that has flown under the radar for the past 12 – 18 months. On macro-economic terms, Hungary’s economy is supported by cheap energy, low interest rates and relatively low exposure to the slowdown in China (a GDP growth of 2.9 percent in 2015). Looking at it from a property market perspective, strong household consumption will impact retail markets (already tenant turnovers have increased in some cases by double digit figures), buoyant automotive production benefits industrial properties and the expansion of ICT services will further dominate the Budapest office scene (office demand was up 51 percent y-o-y). The overall cautious development market helps capital values to improve further as rental outlook remains positive for owners. Helped by a strong occupational market and more affordable financing, yield levels can compress further from their current high levels, narrowing the gap against other core Central European markets.