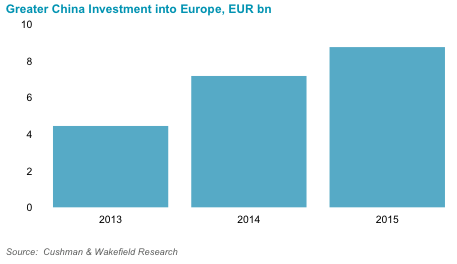 Despite increased domestic volatility and slower economic growth, Greater Chinese investment into European commercial real estate reached €8.5 billion in 2015, a 22 percent increase on 2014, according to the latest research by Cushman & Wakefield.

The report, which charts the trends in investment over the past three years, shows a series of changes which are set to continue throughout the remainder of 2016. One of the key themes is that Chinese investors have taken a broader approach and as a result have been active in wider range of property types and geographies.

Elsewhere, whereas activity in 2014 was dominated by sovereign and institutional capital, in 2015 private and listed companies grew their holdings alongside more corporate activity. Although offices dominated, there was also stronger investment into retail assets representing 17 percent of activity compared 6 percent in 2014. Other sectors, predominantly hospitality, represented a third of investment.

Nigel Almond, Head of Capital Markets Research at Cushman & Wakefield, said: “Geographically we have seen a clear change in strategy. The UK’s share of investment slipped from over 80 percent to 56 percent in 2015. Whilst London dominated, marginally more capital flowed to the regions. The biggest swing has been investment moving increasingly towards the continent, representing 44 percent of investment compared 20 percent in 2014. France accounted for 27 percent of investment, mostly reflecting a significant corporate hospitality deal. We also saw money flow into Germany, Southern Europe and Benelux markets.”

Ted Li, Head of EMEA China Desk at Cushman & Wakefield, said: “In line with trends last year, we see a continued focus on the continent with more investment flowing into Germany in particular. Equally we see a continued shift away from offices with investment in retail growing and a focus too towards industrial and logistics assets. Whilst some institutional money will continue to seek long income assets, those with an existing footprint will consider value-added opportunities as they seek to enhance returns.”