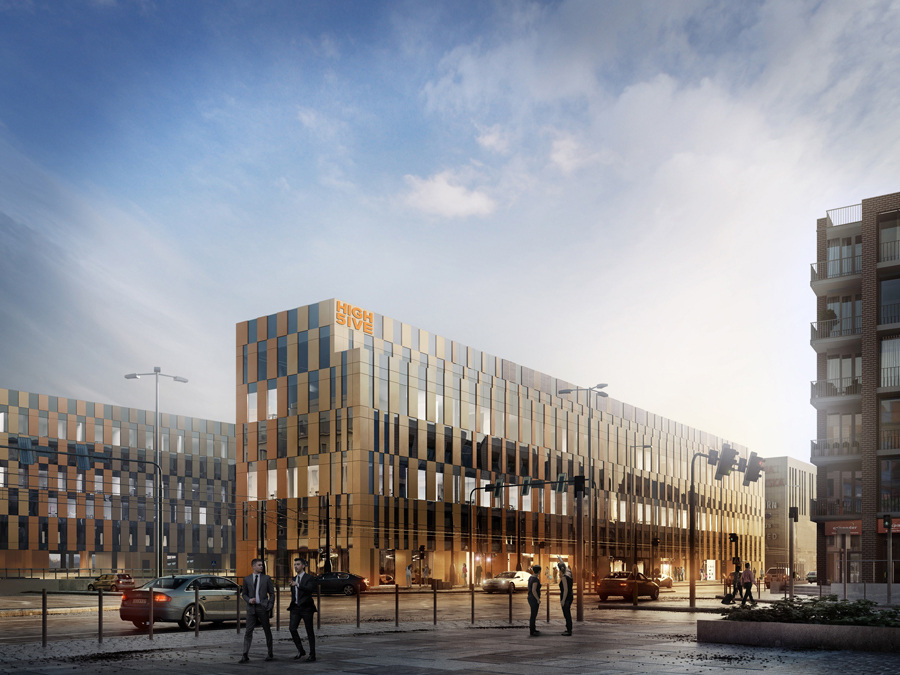 Skanska has laid the cornerstone for its third Kraków office project. “High5ive will be much more than just office buildings. It will become an open, vibrant location available all of Kraków’s residents,” commented Arkadiusz Rudzki, managing director at Skanska Property Poland, during the ceremony. The cornerstone ceremony was attended by the representatives of the City Council of Kraków, project’s architects, as well as academic institutions and Skanska, the project’s developer and general contractor. A specially made cylinder, which contained foundation act and was placed in the building’s foundations, was transported to the location by a bicycle designed for the event.

Kraków is one of the liveliest cities in Poland. It’s student population is the equivalent of the number of residents of Olsztyn or Bielsko-Biała. Over 10,000,000 tourists visit the city each year equating to 13 tourists for every resident. The city’s pace of life has inspired Skanska to develop an office project which will combine these different energies that are generated in Kraków: diversity, creativity, city life, happiness and innovation. High5ive will ultimately consist of five modern buildings complementing Pawia Street.

“High5ive is to date Skanska’s biggest office project in a regional city. Despite the investment’s scale, we have focused on how to appropriately use every square meter – we know how important the area around Pawia Street is for Kraków. Skanska is developing a place which will be full of life and available to both our future tenants and Kraków’s residents. Because of this, we invited a local architectural studio and a foundation to co-operate. They will offer excellent advice on the direction of our project. In addition, we are planning numerous events that will engage residents through various activities during the construction works and, of course, after their completion,” said Arkadiusz Rudzki, managing director at Skanska Property Poland.

“The High5ive complex will be an architectural gateway to the heart of Kraków and a place that is representative of the city centre. The project will seamlessly fit in with its immediate surroundings such as the main building of the Technical University of Kraków, the elevation of Angel City and other historical buildings. The quality and colour of materials used for the project’s façade will match this historical centre’s fabric. The urban development will comprise an open and inviting space with people-friendly squares and passages. High5ive will also include a covered passageway that will lead to restaurants, cafeterias, and other places to relax. It will be an important addition to this part of Kraków with its aesthetics, functionality as well as its openness to local residents. It will be a location for work and play attracting companies and passers-by alike,” said Piotr Nawara, President at nsMoonStudio.

During the designing of the areas surrounding the investment, the company recruited the help of students from the Technical University of Kraków, Fine Arts Academy, the State Drama School and members of the Foundation of Active Citizens. Photos of representatives from these institutions and other participants from the ceremony, taken with a polaroid camera were placed in the specially made cylinder and laid in the building’s foundations. The symbolic cornerstone, in accordance with a Skanska tradition, was transported to its foundation site in an unusual way, this time – by a cargo bicycle, designed specifically for this event.