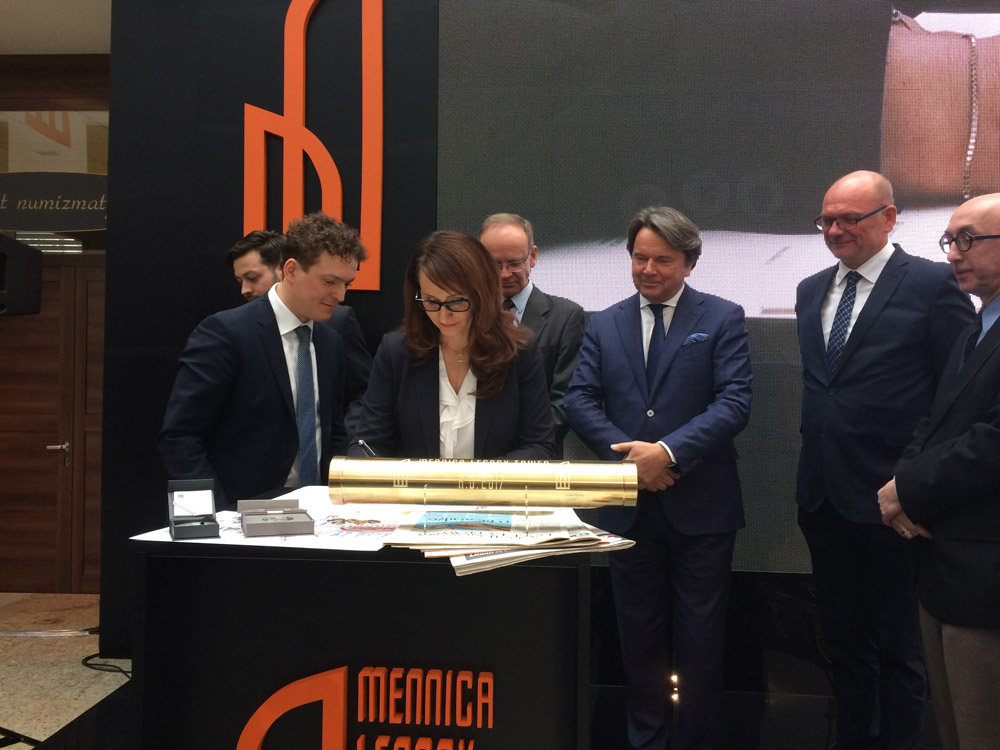 The ceremonial laying of the cornerstone for construction of the Mennica Legacy Tower in Warsaw was held on 7 March 2017. The first building of modern office complex is set to be delivered in the fourth quarter of 2018 by Golub GetHouse and Mennica Polska S.A.

The cornerstone dedication for Mennica Legacy Tower was signed by Cezary Jarząbek, Founder and President of the Board Golub GetHouse, Zbigniew Jakubas, Chairman of the Supervisory Board of the Mennica Polska S.A., Renata Kaznowska, Vice-president of Warsaw City, Marek Sitarski, Vice-mayor of the District Council of Wola, Joachim Schuessler, Principal and Senior Project Designer in Goettsch Partners – which is responsible for the design of the Mennica Legacy Tower, Janusz Lichocki, President of the Epstein design office, and Jerzy Werle, President of the Board in Warbud S.A. – general contractor of the project. The cornerstone dedication was then inserted in a specially prepared capsule, along with local newspapers editions, commemorative coins and graphic by Henryk Sawka. Sealed tube was then installed in the office complex foundation.

The development of Mennica Legacy Tower project is being carried out smoothly and according to the schedule. Groundwork on the construction site began in October of previous year. Currently the buildings underground construction diaphragm walls execution is nearly finished, and the general contractor is carrying out intensive mining of the earth from the excavation.

“The laying of the foundation stone marks a new stage in Mennica Legacy Tower project. We are convinced that it was worth taking up development of most technologically advanced office complex, which thanks to its magnificent architecture and ergonomic solutions for tenants, will become a permanent image of the modern center of Warsaw,” said at the ceremony Cezary Jarząbek, Founder and President of the Board Golub GetHouse.

Mennica Legacy Tower office complex is being erected at the junction of Prosta and Żelazna Streets, a mere 200 meters from the subway station ‘Rondo ONZ’. In total, it will offer 65,630 sqm of lease space. The 140-meter high tower will house 50,752 sqm and the Western building will provide another 14,880 sqm. The employment of the most advanced technological solutions in in both complex buildings, including integrated lift access control and management systems, lighting and AC mobile control – Seamless Access System, and the concierge service, will have a real impact on improvement of office space use and the reduction of energy consumption in the building. Moreover, the offer will be supplemented with amenities such as rooftop terraces with greenery, a restaurant and a café on the ground floor. Both buildings will also have a combined total of 4,500 sqm of commercial and services space.

On the four-storey underground parking lot there will be electric vehicle charging stations and 300 stands for bikes, along with infrastructure for cyclists, including independent, safe entrance, dedicated lifts, a locker room with showers and a repair station.

Mennica Legacy Tower project has been designed by the renowned Chicago-based architectural firm Goettsch Partners, which decided to work with the well-established design consultant Epstein on this demanding project.

The planned date of commissioning for use of the lower, Western building of Mennica Legacy Tower is Q4 2018, while the high tower is to be ready in Q3 2019. The entire investment will be completed in line with the demanding requirements of the BREAAM international certificate with at least ‘Excellent’ rating. Warbud S.A. is the general contractor of the skyscraper.