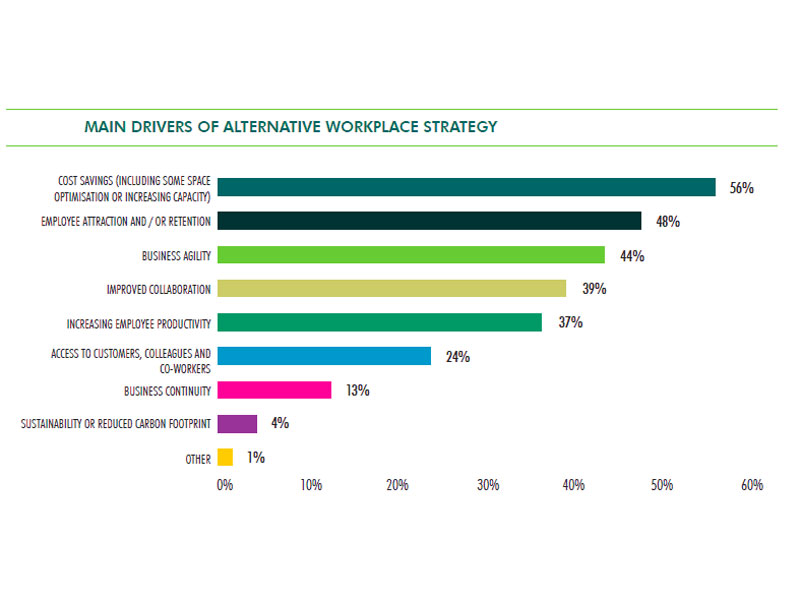 Corporate decision makers are responding to signs of economic improvement across Europe by shifting focus away from pure cost management to future growth opportunities, according to the latest annual European Occupier Survey1 by CBRE.

The survey, now in its fourth year, polls corporate real estate decision makers at global corporations collectively occupying approximately 2.7 billion sq ft (250 million sqm) worldwide. The survey shows corporates’ increased confidence in the economic recovery, with less than half [46 percent] identifying weak economies as a concern. In 2012 the overwhelming majority [70 percent], reported that the uncertain economic outlook in Europe was a key factor in their real estate strategy, with cost management being the primary objective.

Despite such positive signs, cost control remains a priority for corporates. The survey shows almost three quarters [72 percent] renegotiated leases in the past twelve months [compared to 45 percent in 2012], to ‘lock in’ deals while office rents are at, or close to, the bottom of the market. However, such efforts to reduce costs are likely to diminish as the recovery continues.

In addition, 61 percent of companies reported that they have reduced their real estate footprint by occupying space more efficiently. Such space optimisation strategies are increasingly prominent for corporates due to the balancing act between cost savings (reported by 56 percent as a key driver of alternative workplace strategies) and providing a collaborative working environment (39 percent) with the aim of improving employee productivity (37 percent). It is therefore interesting to see that the vast majority of companies are not widely adopting remote working strategies with 75 percent reporting that less than a quarter of staff work flexibly on a regular basis. This indicates that the office environment is still key which explains the focus on improving the quality of the workplace.

This leads to companies placing greater emphasis on providing staff with the right environment in the right locations. Although cost is the principal factor when companies choose office space [cited by 85 percent], 45 percent of companies report that they see the quality of their workspace as integral to attracting and retaining talent. In turn, 73 percent or three quarters believe public transport accessibility is important to staff, with the provision of ‘value-add’ amenities such as an on-site gym or restaurant [48 percent] and flexible workspace [48 percent] also important. Overall, the results indicate that for occupiers, a central, amenity-rich location which provides lifestyle options for the workforce outside the work environment is crucial.

As the economic outlook improves, multi-national companies are demonstrating an appetite for international expansion into new markets. The survey demonstrates this with more than half of corporates [56 percent] naming access to new markets and customers as the principal driver for location decisions. This broad appetite for expansion sees India and Africa emerge as destinations of choice. When asked to identify where they intended to expand their operations, 48 percent named India (double the figure from 2012 at 24 percent), with China mentioned by 42 percent, down from 60 percent in 2012. There is also a significant increase in the number of corporates intending to expand into Africa. This target market is now identified by a third of respondents [34 percent today], versus a fifth [21 percent in 2012]. In the case of both India and Africa, rapid population and economic growth, coupled with increasing transparency and improving infrastructure, is removing many of the traditional barriers to entry.

The shift in corporate focus towards the future is also re-focusing attention of the corporate real estate (“CRE”) function. There is now a greater desire for increased alignment between real estate activities and broader business objectives with 72 percent of companies surveyed noting this as an area for improvement. This indicates that with the correct management, CRE functions could become facilitators of future growth with the knock-on-effect of increased CRE outsourcing.

Mark Caskey, EMEA Head of Global Corporate Services, at CBRE commented: “As we move into a phase of economic recovery it is clear that occupiers are beginning to look beyond pure cost saving initiatives. In the near term we expect a broad cost saving attitude to prevail, however, it is encouraging that corporates are seeking out new target destinations and adopting increasingly sophisticated workplace strategies.

“In particular, a core theme throughout our results has been the increasing influence and focus on workplace strategies. It is clear corporates are sitting up and taking note that ideal working environments lead to better employee productivity and enable the best talent to be attracted and retained. Furthermore, labour outlay is more expensive than real estate costs, so improved staff productivity has a greater impact on companies’ profitability. We expect this trend to continue next year and beyond.”

Richard Holberton, Director, EMEA Research, at CBRE commented: “While financial objectives still govern the corporate occupier landscape, increasingly there is a greater desire to look toward the future. This has seen a greater alignment between real estate activities and broader business objectives. As corporate real estate teams become more strategic and client focused, scope remains for the trend of outsourcing to persist.”

Lidia Alexandrova, Director, Global Corporate Services Department in CBRE, Russia, said: “The crucial factor for the decision to move lays not only in commercial terms, but also in employees’ work environment, location, public transport accessibility, especially because of the Moscow traffic and payable parking places inside Garden ring. That’s why our clients prefer to stay in current premises, but implement workplace strategy to raise business efficiency, for example, by generating new collaboration areas, space optimization, implementing rooms for telephone conversations, organize flexible work places, etc. Corporate clients prefer to extend their current lease agreements for 3 years in average to have an opportunity to catch the pick of new construction.”