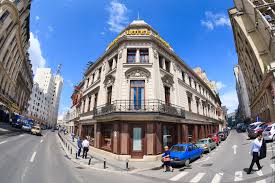 COS opens its first store in Bucharest – EuropaProperty

Fashion brand COS, part of H&M group, has entered the Romanian market and opened its first store on Calea Victoriei in Bucharest. Colliers International advised on the lease transaction by which COS will open a 2 levels store of almost 900 sqm, within a historical building on Calea Victoriei.

The new COS store adds up to the list of premium fashion brands present on the Romanian market, Calea Victoriei still being the favorite destination of fashion retailers targeting customers with above-average incomes in Bucharest. The area close to Radisson Blu and Athenee Palace Hilton hotels remains the most attractive for luxury brands, given the large exposure to tourists, and also good parking facilities nearby. COS is part of Swedish group Hennes&Mauritz, having premium positioning. The brand was launched in 2007 and is the second largest in the group’s portfolio, having more than 150 stores in 20 countries around the world.

”The historical building near Radisson Blu hotel that will host the first COS store was the natural choice real estate wise, being aligned with the brand’s strategy in other European cities. Calea Victoriei remains a traditional shopping artery targeting clients with medium to high incomes, where renowned brands such as Gucci, Burberry, Max Mara, Furla, Musette or Antony Morato have already opened a store. COS is a much awaited brand in Romania, being one of the most important new entries in the local market, in terms of fashion brands,” commented Simina Niculiță, Associate Director Investment Services, Colliers International.

A new project will be developed in the same area, where Cina restaurant was located, near Romanian Atheneum. Given the area, we foresee the future project will have a dedicated retail and restaurant area, targeting the same category of clients as do the the brands present on Calea Victoriei. Premium brands choose to open their first store on this kind of shopping areas given the unique architecture of historical buildings and also the possibility to personalize the space more than within a shopping center. That is why we consider this area will be of interest in the future for any new entries, or brands currently located in other areas which that are not clearly defined.

Swedish group Hennes&Mauritz is present on the Romanian under the same brand since 2011, currently owning a 42 stores network under H&M brand, across the entire country. For 2015, the group reported sales up to 40 percent bigger than in the previous year, of almost €193,4 million.

According to data of Colliers International, in 2015, many of international retailers present on the local market reported significant increases of turnovers compared with 2014, higher by 10-20 percent.