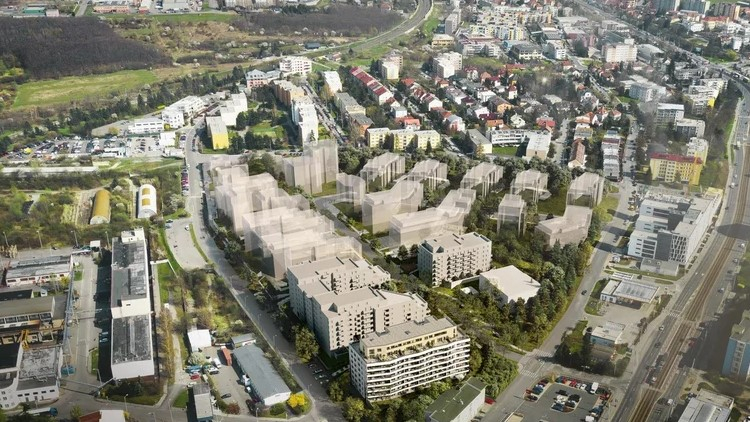 The Prague Public Transport Company (DPP) has signed an agreement with investors from CPI Property Group and Karlín Group and together they will build the Nové Holešovice district in Prague 7.

The Nové Holešovice district will be built in Prague as a joint work of investors from CPI Property Group, Karlín Group and the Prague Transport Company (DPP), which owns the land for the construction. The development is to be built around the Nádraží Holešovice metro station. It will start with the reconstruction of the northern vestibule of the metro station, above which flats, offices and shops will be built. In the first phase, 2.5 hectares should be developed and further stages are still being planned, as negotiations are still underway with Czech Railways (ČD), the Railway Administration and companies for the surrounding plots.

According to founder Serge Borenstein, it may take six months to a year to consolidate the area and put it into a joint venture. “The first phase may involve almost a hundred thousand square metres of gross floor area, then it may double or triple,” Borenstein explained.”This will be the beginning of a major project that will be created together for the first time by the city and the private sector. We are now preparing, with the support of the city, an international architectural workshop for the first phase. We would like to announce it later this year,” said Serge Borenstein, founder of the Karlín Group.

“Together with the Karlín Group and the transport company, we have the opportunity to build a really strong and functional joint venture that also fulfils the transport company’s original intentions,” said CPI executive director Zdeněk Havelka, adding that his group will include its land, including the existing bus station, in the upcoming architecture and urban planning workshop.

“It depends on agreements with the city regarding the relocation of the superior infrastructure and also on securing all the necessary land to make the resulting masterplan (general plan – ed.) as urbanistically and economically efficient as possible,” Jan Ludvík of the Karlín Group added about the immediate plans.

Originally, only Karlín Group and DPP were involved in the project. However, CPI has repeatedly challenged this cooperation in the Antimonopoly Office and court because DPP did not launch a public tender.