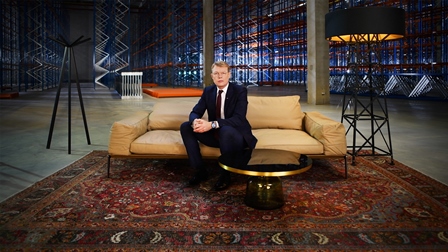 CTP’s preliminary results for the past year once again confirmed the company’s dominant position in the CEE region. In 2017, CTP increased its portfolio by approximately 680,000 sqm and reached a record 4.5 million sqm. Occupancy of its industrial real estate—spread across over 82 locations in the region—came to 97.7 percent. The greatest expansion occurred in the Romanian and Hungarian markets. Plans for the upcoming year are ambitious: By 2022, CTP aims to double its portfolio, reaching 10 million sqm.

For CTP, 2017 once again brought record numbers and interesting projects. CTP grew to over 680,000 sqm during the year, most of which was through new construction and business from current clients, who made up two-thirds of the portfolio’s expansion. This positively influenced CTP’s buildings’ average age, which remains at a stable 8 years. E-commerce, production and logistics dominated the real estate market, and CTP identified this trend and added new, big players from those spheres to its client list.

For example, DSV or Van Moer Logistics in Romania, TI Automotive, Faurecia, Plastic concept on Slovakia, IAC Group in polish Opole. In Czech Republic we did deal with GEFCO or STOW. DANA in Hungary or Coloplast in Tatabánya.

“We have had one of the most successful years in CTP’s history. I am proud of our team, which worked hard all year to ensure we would once again confirm our position as market leader. We finalized a number of interesting projects, began construction of new ones, and expanded our park’s facilities to benefit our clients and the environment. We have had many accomplishments in the past year, and we plan to continue on track in 2018,” said Remon Vos, CTP CEO.

Regarding this year, he added: “We are excited about the new year. I expect that companies will adapt to the new market conditions, such as industry 4.0, increasing automation, IoT, and other new technologies. These trends will require smarter buildings, higher standards, and greater customisation. CTP is uniquely suited to the challenge. And to provide space for our clients’ growth, we have invested in our land bank, which is sufficient for the development of an additional 3.5 million sqm of industrial real estate.”

In the past year, CTP’s focus on the growth of its portfolio in countries outside of the Czech Republic has been greater than ever before. The most significant expansion occurred in the Romanian and Hungarian markets, where growth amounted to over 66 percent of the company’s portfolio’s expansion during 2017. CTP became the market leader in Romania, with 700,000 sqm of A-class industrial space in 10 cities.

In Hungary, expansion also required internal changes. CTP has considerably strengthened its team and appointed new Country Manager, Rudolf Nemes. His primary focus will be the acceleration of growth and the enhancement of the current portfolio in order to support the fulfilment of CTP’s ambitious goals.

The most notable internal change influencing the entire company came with appointing new COO of CTP, Robert Pitt, who is responsible for strengthening CTP’s position and expanding ventures across the region.

CTP continued in its efforts to support sustainable long-term development and continues to build efficiently to ensure the least negative impact on the environment. In the past year, CTP installed innovative systems to measure consumption, and more effective ventilation units for better heat transfer. It also continued with LED lighting installation across its entire portfolio, investing €1.9 million into its ‘LED everywhere’ project, a strategy that CTP will continue adhering to this year.

Apart from industrial space, CTP has also found success in other areas of business. Last November, Domeq—the new concept of modern living for students and young professionals—opened its doors in Brno. The first of its kind in the area, Domeq combines aspects of both hotel and residential living. Additionally, CTP commenced the construction of Vlněna, and CTPark Bor saw the inclusion of a second residential area.

Another project that garnered attention was CTP Art Wall, the aim of which was to “beautify” industrial halls utilizing mural art. The first endeavor was finalized in autumn of 2017 at CTPark Humpolec. The second art piece, at Vaclav Havel Airport Prague, will be completed by summer 2018.