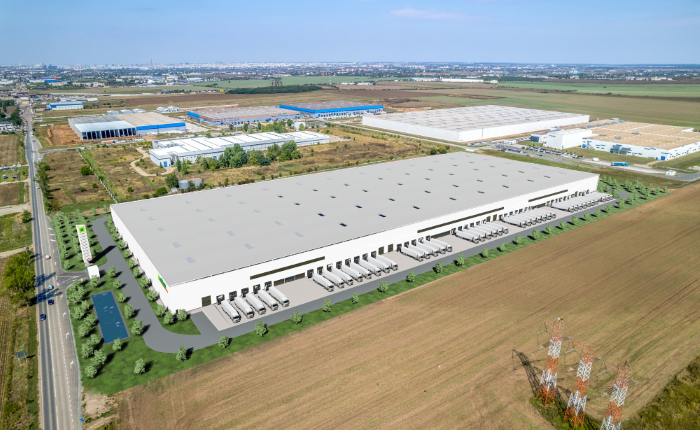 CTP is putting another pin on the map of Bucharest, this time in the South, in the  Popesti – Leordeni area, by expanding the existing CTPark Bucharest South to 150,000 sqm.

CTPark Bucharest South is strategically located between the Bucharest ring road and the future A0 motorway, with direct access to the A0, providing quick access to any area in Bucharest and its surroundings. In addition, the project offers an excellent connection to the Port of Constanta, with the A2 motorway only 9 km away, facilitating deliveries to foreign destinations such as Bulgaria, Greece and Turkey.

CTP acquired the industrial park in 2021 and now is making new investments by developing a class A building with a leasable area of around 60,000 sqm, which adds to the 70,000 sqm fully leased and another 15,000 sqm soon to be delivered.

“Our park in the south of Bucharest benefits from the best infrastructure in the area, with two direct entrances from DN4, close to the ring road, but also with direct access to A0, at the junction point located at less than 500 m from our new building. We already have 70,000 sqm fully leased, another 15,000 sqm soon to be delivered and we’ll start the construction for 60,000 sqm. With this extension, CTPark Bucharest South will reach 150,000 sqm, all the infrastructure is already prepared for this,” said Ana Dumitrache, Country Manager CTP Romania.

As in the other industrial parks developed by CTP, the buildings in CTPark Bucharest South are designed to offer turnkey solutions to clients, but can also be customized to meet all the operational and logistical needs of potential tenants. CTPark Bucharest South will include generous green spaces and dedicated office areas, so as to provide the best possible quality of life for the park’s employees, who also benefit from quick access to the public transport network, just a few hundred metres from the industrial park.