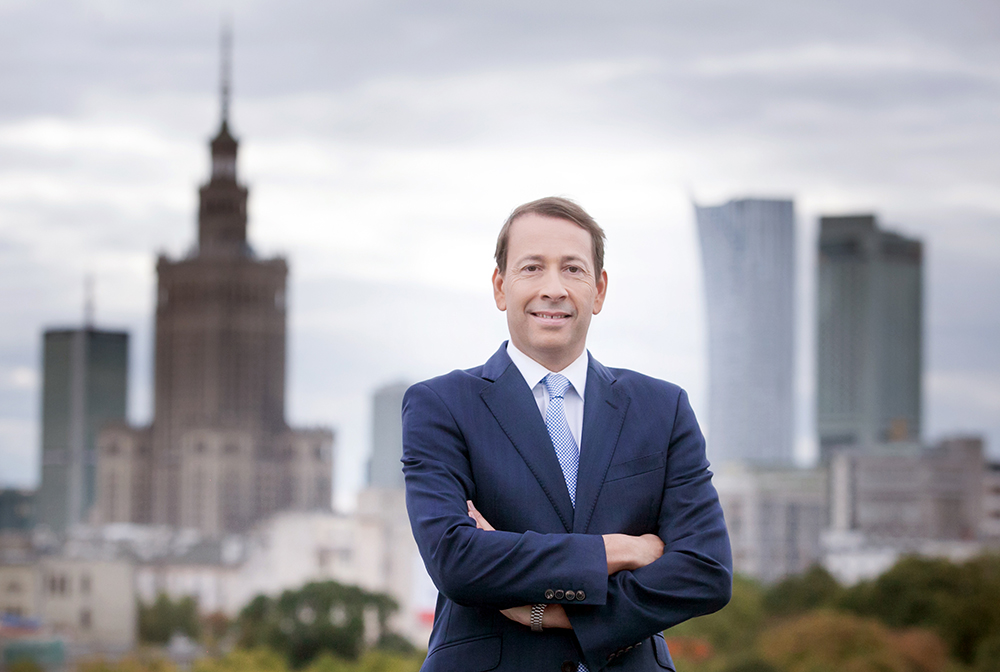 Warsaw, Poland’s capital and largest city, has a population of more than 1.75 million. It is also the country’s biggest labour market and home to many university-level schools with a strong R&D sector. It boasts a relatively low unemployment rate which stood at 5.6 percent at year-end 2017 and the highest gross monthly salary averaging PLN 5,432. Warsaw is growing at a rapid pace, combining modernity with history, new business districts with green areas, the latter accounting for 28 percent of the city’s total area in 2017, and investing in both public transport and alternative means of transport (including 400 km of cycle lanes as at the end of 2017).

Warsaw 2017
Warsaw is a leading European business location, including for the SSC sector, and one of Europe’s safest cities. It annually attracts thousands of people from across the country and abroad looking for jobs or new career opportunities.

With many commercial and infrastructure projects underway, Warsaw is currently one of Europe’s biggest construction sites. At the end of 2017, Warsaw’s total office stock stood at 5.28 million sqm, while the leasing volume hit 824,700 sqm amid a record absorption level of 363,300 sqm and a vacancy rate averaging 11.7 percent, the lowest since 2013.

The largest infrastructure project having a major impact on the capital city’s office market was the completion of the first phase of the second metro line, which spurred the development of the Daszyńskiego Roundabout area, now the fastest-growing office district. This zone boasts the largest concentration of office space in the pipeline accounting for more than 50 percent of new office space planned for delivery in Warsaw in the years 2018-2020.

“At the end of 2017, the Warsaw office market saw a record absorption level which was nearly 60 percent higher than in 2016. High absorption was largely driven by the unabated activity of tenants who leased 824,700 sqm in 2017. Occupier demand for office space in Warsaw came largely from the business services sector that recognized the city’s key strengths such as the largest labor market in Poland, strong academic base, infrastructure improvements, high quality of life and relatively low living costs. With an increase in occupier demand, developers have stepped up construction activity. There is currently more than 770,000 sqm of office space under construction, most of which is scheduled for delivery in 2020,” said Jan Szulborski, Consultant, Consulting and Research, Cushman & Wakefield.

Warsaw 2020
In 2020, Warsaw is expected to have a population of around 1.77 million and to be gradually implementing a strategy underpinned by three core principles: active inhabitants, a friendly location and an open metropolis. First and foremost, it will see major transport improvements, including the completion of the southern ring-road which will enable a smooth transit through a tunnel built in the Ursynów district and across a new bridge on the River Vistula. Other projects nearing completion include the redevelopment of Marynarska Street, the construction of a flyover in Postępu Street, and the construction of a link between Suwak and Cybernetyki streets. The existing tram network will be extended to link Wilanów with the Western Railway Station and Gocław with the city centre. In addition, Targówek and Wola will be incorporated into the city’s rapid transit system following the extension of the second metro line. The extension of the second metro line will also benefit Praga, which is likely to attract strong investor interest thanks to the relatively large pool of post-industrial sites available there for office developments. Warsaw’s cross-city railway line is also scheduled for upgrading around this time, leading to heavier train traffic between the Western and Gdański Railway Stations. The area around the Gdański Railway Station will see delivery of projects such as HB Reavis’ Burakowska 14 and Ghelamco’s Dworzec Gdański.

Warsaw’s urban landscape will be thoroughly transformed by addition of new developments by the end of 2020, including Varso, the EU’s tallest building measuring 310 meters and offering more than 110,000 sqm of office space. The Daszyńskiego Roundabout area will consolidate its position as Warsaw’s new business hub following the completion of five high-rise buildings: The Warsaw Hub, Spinnaker, Generation Park, Skyliner and Mennica Legacy Tower. These projects will deliver 286,000 sqm of new office space by year-end 2020. In total more than 1.1 million sqm is expected to be added the market, bringing the city’s office stock to 6.3 million sqm.

In addition to modern high-rise buildings, a number of revitalized schemes combining office, retail and residential functions will be developed leading to a revival of some of the city’s neglected areas. With such projects as Browary Warszawskie (Echo Investment), ArtN (Capital Park), Koneser (Liebrecht & Wood) and EC Powiśle (White Star Real Estate and Tristan Capital Partners), these historic buildings will be redeveloped and fully integrated with the modern character of the city.

Revitalization projects underway will also transform Warsaw’s streets. The city authorities will be investing in eco-friendly buses (at least 160 electric buses by 2020) in a move to modernize some of its current fleet and in cycling infrastructure by building more self-service bike rental stations and cycle lanes.

Warsaw will continue to attract top talent and students from across the country and, increasingly, from abroad. That’s why Warsaw’s housing stock is expected to increase to nearly 970,000 units by 2020. The city’s rapid expansion will also benefit the Służewiec office district with about a dozen residential and hospitality projects to be delivered there. As the Warsaw population is increasing, new public projects will also break ground. The year 2020 will see completion of the Polish Army Museum at the Warsaw Citadel and construction of the Museum of Modern Art underway in Defilad Square. In addition, Griffin Real Estate will rebuild the Emilia building nearby as a public space with access to an all-year-round garden. The Rotunda building will also be rebuilt.

“Warsaw continues to develop at an extraordinary pace and by 2020 will offer its inhabitants a unique environment to live, work, shop and relax. Through a combination of regeneration projects and new developments, as well as significant infrastructure investments to assist travel, Warsaw will provide high-quality living and working conditions for its inhabitants, delivering sustainable growth and offering complimentary cultural and community facilities.