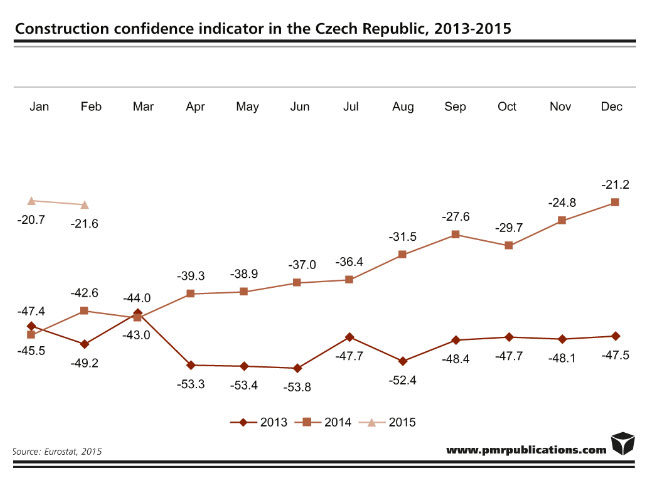 The year 2014 brought the first growth, albeit low, in the Czech construction industry. Construction output rose by 3.5 percent, mainly reflecting a faster recovery in civil engineering construction. The growth is likely to continue in 2015-2016, but it will remain modest. An insufficient number of orders in the public sector and the low appetite for investment by private developers are the main reasons for slow recovery of the sector.

According to a new report entitled “Construction sector in the Czech Republic 2015 – Development forecasts for 2015-2020” published by the analytical and research company PMR, the Czech construction output went back to growth in 2014 following five years of consecutive declines. Construction output increased by 3.5 percent year on year to over CZK 400 billion (€15 billion). This figure was still approximately one-quarter lower than that of 2008, when the economic crisis erupted.

In 2014 business confidence in construction underwent a gradual, but considerable, improvement. The improvement continued in the first months of 2015, reaching a record six-year high in January 2015.

The civil engineering construction continued to lead among the construction segments, a position that it has been defending since 2008. It accounted in 2014 for over 46 percent of construction output.

In 2014, as a number of transport infrastructure construction orders were tendered and other projects launched, there was a slight recovery in civil engineering construction. Output in this subgroup grew by 7.4 percent year on year. The growth reflected an increase in budgets and better articulated strategies adopted by the government in 2013-2014 which are expected to continue to encourage growth in the coming years.

After examining data on construction projects and opinions from construction companies, PMR analysts expect a 6-7 percent growth rate in construction output in 2015-2016. Investors do not yet have long-term projects in their portfolios, and large investors are still wary. At the same time, experience has shown that the absorption capacity of the bodies responsible for commissioning transport infrastructure construction work is still low. This has prevented a steeper increase in construction output. All of these are reasons for cautious predictions for the years to come.

In 2014, 6,180 permits were awarded for non-residential construction projects, a record low and the lowest figure in a decade. The value of non-residential construction projects which received building permits also reached record low levels in recent years. Permits for buildings worth approximately CZK 37 billion (€1.4 billion) were issued in 2014, a year-on-year reduction of almost 7 percent. This was also the lowest figure in over a decade, less than half the value reached in 2007.

The number of building permits for residential buildings continued to fall in 2014 as well, the third year in a row. However, as a new wave of residential construction projects began, the total floor area covered by newly issued building permits increased by some 4 percent year on year. Following six years of continuous decline, the number of residences started rose by more than 10 percent in 2014. This principally followed the resumption of investments on this market. The increase was driven by multi-family buildings, with the number of dwellings started in 2014 rising by over 37 percent year on year.

Developers expect the average price of a new flat to rise further in 2015, driven mainly by the record low mortgage interest rates and the growing economy. There is burgeoning demand for small flats on the Prague residential market.