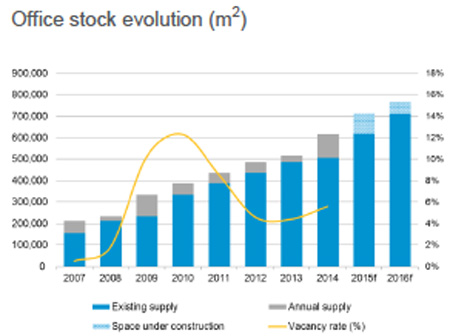 Kraków’s reputation for technology and business services continues to grow apace. Half of the companies now located in Kraków have entered the market in the last 5 years, with 12 new centres established in 2014 alone. Rather than a slowdown in number of new entrants, the critical mass of companies present in Kraków is attracting more new companies – according to “Kraków Office Market 2015” report produced by Colliers International and ASPIRE.

ASPIRE and Colliers experts observe that Kraków is fast emerging as Europe’s hub for technology and business services outsourcing and offshoring. This is confirmed by Kraków’s position as the top ranking European city in Tholons Top 100 Outsourcing Destinations 2015. Globally, Kraków is eclipsed only by the large Indian cities, such as Bangalore and Chennai, or Manila in the Philippines.

“There is no better place in Europe for business services than Kraków. We confidently estimate that this year 7,500 new jobs will be created by the IT and business services sector in the city. This is creating huge opportunity in real estate. Companies in our industry lease over 60 percent of Kraków office stock,” said Andrew Hallam, General Secretary of ASPIRE.

Demand for office space accounted for 117,200 sqm (+28 percent y-o-y). Companies in the modern business services sector entered into agreements for 88,000 sqm (75 percent of total demand in the city) and remained the most active players on the market.

“Kraków enjoys unrelenting interest from tenants. Despite the record growth in stock, the vacancy rate in 2014 stood at a level below 6 percent, which confirms strong absorption of office space,” said Ewa Grudzień, Analyst in Research and Consultancy Services of Colliers International.