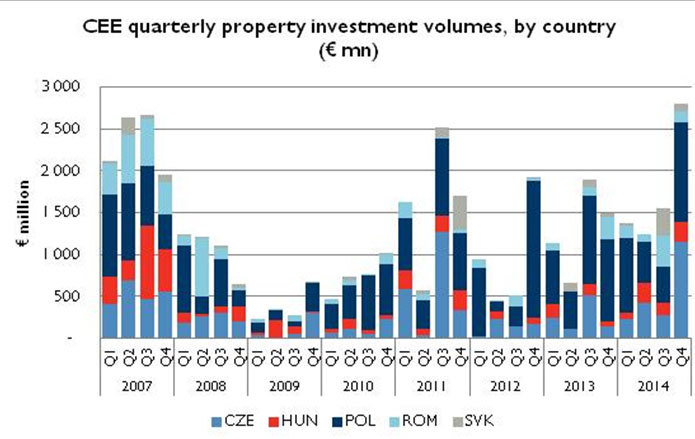 According to Cushman & Wakefield, investment transaction volume in the Central European markets of Poland, the Czech Republic, Hungary, Slovakia and Romania totalled around €1.56 billion in Q3 2014.

Investment activity in Central Europe in the first 3 quarters of the year is 25 percent up on the same period last year and represents a 42 percent growth on the 5-years’ average. However, the story is even stronger than the data suggests with several large transactions being signed in Q3 but formally closing in Q4 such as P3’s acquisition of the €523 million industrial portfolio from Tristan Capital Partners and its joint venture partner, VGP. According to Cushman & Wakefield’s analysts, this year’s volume is likely to reach €7 billion.

James Chapman, Partner, Head of CE Capital Markets at Cushman & Wakefield, said: “The summer was not a holiday season for investors. In recent years, only third quarter investment volumes in 2011 and the record year 2007 exceeded Q3 2014’s level. Given the considerable pipeline of transactions which may close by the end of December, this year’s total is expected to be the highest in the last seven years and the trend is set to continue into 2015.”

The highest investment volume in Q3 2014 (€425 million) was registered in Poland, which has boasted the strongest investment activity in Central European in each quarter since 2008. However, the Czech Republic is experiencing a significant increase and we have seen Romania (€375 million), Slovakia (€325 million) and Hungary (€157 million) take back market share.

Within this data, there is a further story about the significant growth in investor appetite for regional cities that are showing strong occupier and spending growth fundamentals such as Krakow and Tri-City in Poland. We expect to see this story come through in the data in Q4 and into 2015.

In Q3 2014, the industrial market continued its impressive bull run with 125 percent volume growth over the 5-years’ average. The logistics sector is set to grow with the developing network of roads and motorways and increasing demand for warehouse space reported by e-commerce. The weight of capital looking to invest continues as new entrants from North America and Asia Pacific try to find ways in invest considerable sums.

However, it is the return of retail investment that is set to be the new story for Q4 and into 2015.

James Chapman, said: “Retail investment has not yet seen the bounce back experienced in the other sectors. However, investors have woken-up to the exceptional consumer spending growth forecasts for the CE region and prices for quality schemes are increasing including those in regional cities. This is causing sellers to consider bringing strong centres to the market and so we expect to see significant activity during the next 12 months.”

The largest investment transaction in Q3 in the CE region was the acquisition of the Eurovea retail and office scheme in Bratislava by the Slovak investment fund J&T. The second largest deal was the portfolio transaction of eleven Real shopping centres in Romania acquired by Auchan.

James Chapman, concluded: “The investment market in Central Europe has moved up a gear in 2014. We are seeing confidence return alongside the tenacity needed to complete deals. The market is on a trajectory to hit volumes similar to the peak of 2007 within the next 2 years. Short-term challenges with over-supply in specific sub-markets will be out-weighed by a structural desire to source long-term, intrinsic value from Central Europe’s real estate. This will redefine market pricing expectations and further promote liquidity.”