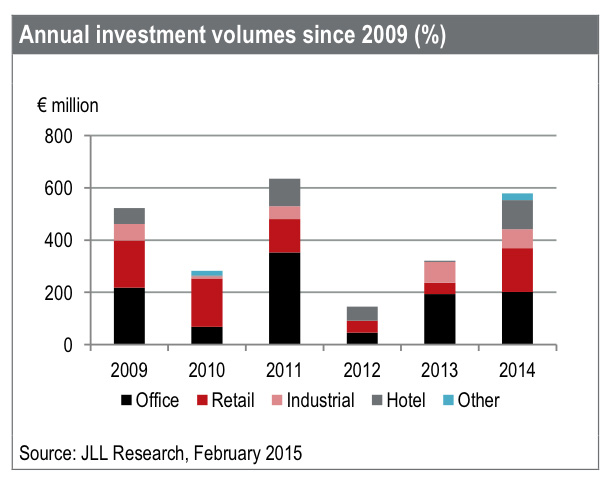 The Hungarian commercial real estate market closed a remarkable year in 2014, according to the recently published Q4 2014 Budapest City Report from JLL. Last year Hungary witnessed its second highest transaction volume since 2007 with a total volume of just over €580 million, out of which income producing assets represented around €450 million.

Among the various asset classes, the performance of the Hungarian office market was especially convincing as vacancy dropped to the lowest level of the past 6 years while gross take-up broke record volumes. As usual, the most popular asset class was office, generating 35 percent of the total volume, followed by retail with 29 percent and industrial with 13 percent. The remaining share is accounted for by hotels and properties for redevelopment. The total transaction volume in Hungary for Q4 2014 amounted to some €77 million with €60 million of investment deals. The most significant transactions were office assets with two large and two smaller properties sold.

According to CEE Investment Market Pulse, the year-end investment research publication of JLL, investor appetite has gained momentum for Hungarian assets due to improving market conditions and the attractive prices compared to Poland or the Czech Republic, making prime assets particularly attractive.
Based on the latest transactional evidence, the prime office yield stands at 7.30 percent. Prime retail is at 7.25 percent and prime logistics now stands at 9.25 percent.

“In 2014 real estate markets across the CEE region – including Hungary – experienced outstanding performances. The annual investment volume of the region expanded by 27 percent YoY reaching nearly €7.9 billion. In Hungary investment volumes increased by 80 percent on 2013, however we need to note that the 2013 base was relatively low with only €320 million,” commented Rita Tuza, Head of Research at JLL Hungary.