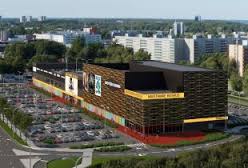 East Capital Baltic Property Fund II (“the Fund”) managed by East Capital has announced the signing of an agreement to acquire shopping and entertainment centre Mustamäe Keskus in Tallinn. Until the closing date of the agreement, the details will remain confidential.

“Mustamäe Keskus shopping centre is an attractive investment located on one of the arteries of traffic in Tallinn and it is an important addition to the Fund’s real estate portfolio. The shopping centre will have a whole new concept, where emphasise is more on entertainment and leisure. One of the most important showpieces of the centre will be the most modern multiplex cinema in the Baltics,” said Madis Raidma, East Capital Real Estate CEO. East Capital Baltic Property Fund II was launched in 2012 and invests in commercial real estate across the Baltics. In total East Capital manages close to €300 million in real estate assets with a total of 250,000 sqm and more than 500 leaseholders in the Baltics.

According to Hannes Raag, member of the management board of Mustamäe Keskus, it is a special transaction – an international fund is purchasing real estate with corner stone yet to be placed. “Our main goal is to hand over a shopping and entertainment centre with a clear competitive edge and strong leaseholders to the new owner by the end of the year. The construction works are on schedule and the centre already had binding agreements for 95% of the leasable area in December 2014, one year before opening,” Raag added. The sellers of Mustamäe Keskus are companies based on Estonian capital: ISA Investeeringud, Torres Holding and Tallinna Tehnopark.

Mustamäe Keskus is currently under construction and will be finalised in December 2015. The shopping centre, located at Tammsaare tee, has a total construction volume of 21 000 sqm, of which leasable area is 13 500 sqm. The most significant leaseholders of the centre are: Rimi, Apollo multiplex cinema, MyFitness and different restaurants and cafes that are located on more than 2000 sqm.