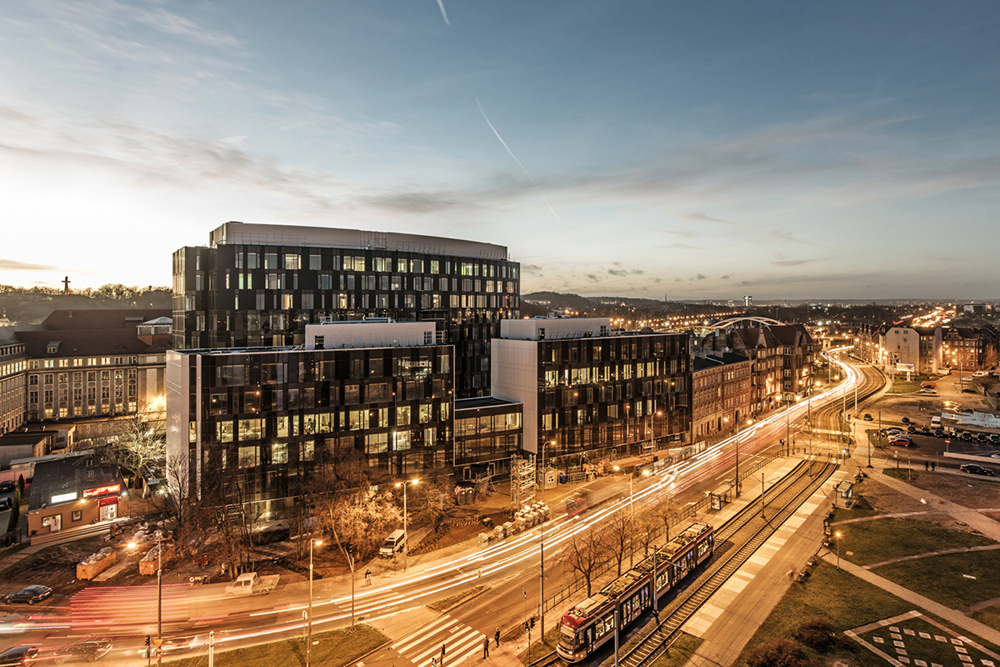 Echo Investment concluded the final contracts concerning the sale of the office buildings: O3 Business Campus stage I in Kraków, Tryton Business House in Gdańsk and Symetris Business Park I in Łódź.

The total amount of the transaction is €124 million, €113 million of which was paid by the buyer – Echo Polska Properties (EPP) – on the conclusion of the transaction. The remaining amount is to be paid in 2017 when all the tenants move in. The buildings included in the contract offer a combined modern office area of 52,200 sqm and they are currently 80 percent leased.

“Following the sale of the Q22 skyscraper at the price of €273 million, these are the next profitable transactions which release a considerable amount of cash for future development. In this way we implement our strategy of building, leasing and prompt sale of commercial properties. I am glad that the new owner of the three office buildings is EPP, a majority shareholder of which is Echo Investment. It confirms the quality and the potential of these buildings,” said Nicklas Lindberg, president of Echo Investment.

“It is a very successful transaction for EPP,” said Hadley Dean, president of EPP. “Only since the end of September, when a conditional purchase agreement was signed, we have leased an area of over 14,000 sqm in Tryton, O3 Business Campus and Symetris. The buildings have very attractive locations and they offer an effective area which is adjusted to modern company needs.”

The transactions concern three out of seven properties included in preliminary contracts signed by Echo Investment and EPP. In 2017 and 2018, after the fulfilment of all conditions precedent, contracts concerning two more stages of the O3 Business Campus complex in Kraków, the second stage of Symetris in Łódź and the third, final stage of A4 Business Park in Katowice will be concluded. EPP secured its right of pre-emption by signing an appropriate agreement as well as co-financing 25 percent of the buildings. The conclusion of each of the contracts is subject to some conditions including: obtaining an occupancy permit and leasing minimum 60 percent of each of the buildings.

EPP became the owner of the first stage of the O3 Business Campus complex, which has a leasable area of 19,100 sqm and includes tenants such as: KPMG, Epam, Ecolab, Orlen Oil, IAG Global Business Services and City Space. The entire complex consists of three A-class office buildings located in the northern section of Kraków, at the junction of Opolska street and 29 Listopada avenue. EPP holds the right of pre-emption with regard to two more buildings, the construction of which is to finish in 2017 and 2018.

Tryton Business House is an office building located in one of the most characteristic sites in Gdańsk, at the junction of Jana z Kolna street and Wały Piastowskie. It consists of an 11-storey tower and two lower buildings which have 6 floors each. They have a combined leasable area of 23,700 sqm, which is occupied by companies such as: Intel, PGS Software, Eltel Networks and EY.

The office building in Łódź which has been sold by Echo Investment is the first stage of the Symetris Business Park complex. It has a leasable area of 19,100 sqm, which is occupied by: Nordea, Philips Polska and TRW Polska. The second stage of Symetris, which is to be completed in 2017, is also subject to EPP’s pre-emption right.

Echo Polska Properties is a Dutch company which operates according to the REIT formula and invests in the real estate sector, particularly in office, retail and industrial properties in Poland. Its diversified portfolio of assets includes 10 office projects and 11 retail projects with a combined area of 636,170 sqm. The buildings are located in 13 largest cities in Poland, with a strong economy and a high purchasing power, which are also attractive for international investor. EPP’s goal is to create the largest in Poland platform of profitable retail, office and warehouse assets which will generate income and provide high rates of return for its shareholders.