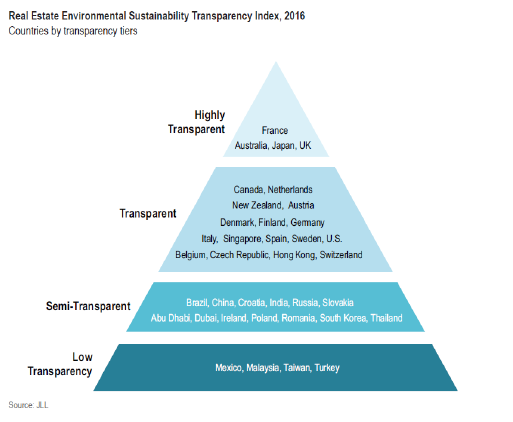 France has topped JLL’s Real Estate Environmental Sustainability Index for the first time, ranking in the “highly transparent” category alongside Australia, the UK and Japan, thanks to the consistent roll-out of legislated mandates to transition to a low carbon economy.

Dubai has moved into the semi-transparent group for the first time, owing to the introduction of mandatory green building specifications for new constructions of residential, commercial and public buildings in the Emirate.

Looking at the Index overall, whilst 17 countries have improved their scores since the last survey in 2014, almost the same number has remained static (13) or declined (three). Half of all country index improvements have been driven by the introduction of voluntary minimum energy efficiency standards for existing buildings.

Franz Jenowein, director and head of global sustainability research at JLL, commented: “Environmental performance considerations are becoming more widely established across global markets, but the pace of progress in creating new tools and regulations is slow. Clearly defined carbon reporting frameworks and obligations for companies are missing in too many countries. It can only be hoped that the success of the Paris Agreement on climate change in December 2015, will stimulate a wider introduction of standardised carbon reporting instruments.”

· Finland, one of the four new entrants along with Malaysia, Taiwan and Thailand, has gone straight into the ‘transparent’ tier and is now alongside more advanced markets such as Singapore and Germany.
· Switzerland and the U.S. have moved from the semi-transparent group into transparent.
· Slovakia, Romania and South Korea have moved up from low transparency to semi-transparent.
Key highlights in sustainability measures:
· The most ubiquitous environmental transparency instruments, and cornerstones of environmental performance transparency, are minimum energy efficiency standards for the design of new buildings (mandatory in 87 percent of all countries) and market-specific green building certification schemes are publicly available in approximately two-thirds (65 percent) of all countries in the Index.
· The least available transparency instrument continues to be the financial performance indicator for green buildings, which is available in only four of the 37 analysed countries – Australia, Canada, France and New Zealand.
· Carbon emission reporting frameworks have been established as a mandatory obligation in four markets and as a voluntary tool in seven countries around the world.