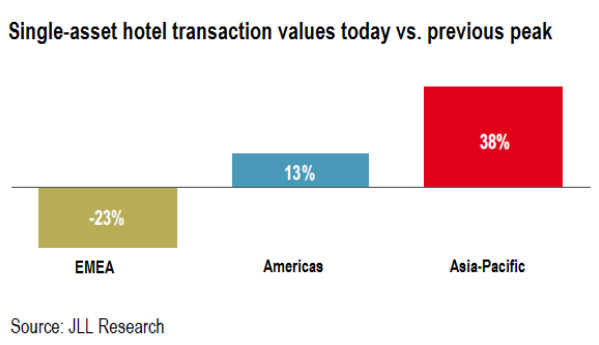 Europe is the world’s most attractive hotel investment destination – EuropaProperty

Europe, the Middle East and Africa’s (EMEA) hotel investment markets are set for another bumper year, according to research undertaken by JLL’s Hotel & Hospitality Group.

EMEA is projected to see close to $25 billion in hotel trades in 2015 – up from $21.5 billion in 2014 and representing 36 percent of all hotel transactions globally.

Much of this activity will be driven by large single-asset transactions, led by London and Paris, while portfolio deals are anticipated in the U.K. and Germany.

Global hotel real estate transaction volumes are expected to reach $68billion in 2015 with global funds and private equity groups based in the U.S. and Western Europe leading the charge. The U.K., Germany and the US represent the biggest destinations for private equity capital globally.

Asian money will also feature more strongly in 2015, especially driven by Chinese capital. Asian insurance companies have helped grow the swell of outbound capital from several hundred million dollars annually during the past several years to nearly $1 billion in 2014. Global cities with direct flight connections to China such as London, Paris, Amsterdam, Dubai are high on investors’ wish lists.

North American private equity funds have cash to deploy in the short term and European yields remain some of the most attractive – especially at a time when prices continue to rise on home soil.

“Whilst the question of fair value resounds through the sector, Europe still offers more upside on the recovery curve, with per-key values of assets still below the previous peak in both Western and emerging Europe. In 2015, we will see private equity investors look to higher yielding markets such as Southern and emerging Europe, as investors continue to follow opportunities,” said Christoph Härle CEO EMEA, JLL Hotels & Hospitality Group.

“Many European countries have additionally reached their occupancy ceiling. Thus, average rates will be the key driver of RevPAR moving forward, boding well for hotel profit increases. The Middle East is expected to see growth as well, and hotels in Africa will at times experience double-digit RevPAR growth,” said Härle.

Last year saw debt opening up in a controlled manner in the Eurozone as balance sheet lenders made their way back into the hotel lending space.

“2015 will mark the redemption of Commercial Mortgage-Backed Securities (CMBS) market as a debt investment product, in the UK and Continental Europe. With improved underwriting standards and increased subordination levels, we expect bond investors to accept hotel assets as underlying security again, closing some of the funding gap in the space. The return of CMBS will provide potential for growth, which will help support the growing investor demand for acquisitions in EMEA and will stretch equity further. In addition, direct lending funds (Shadow-banks) are increasingly closing the LTV gap between the current 50 percent-55 percent senior position and the 75 percent LTV. More push from capital exporters in China and the Middle East will put an upward pressure on deal flow as well,” continued Härle.