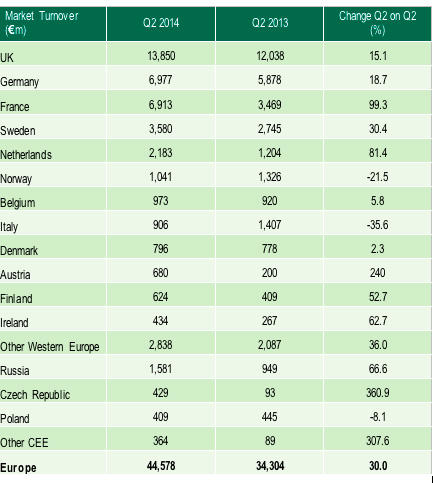 European commercial real estate investment activity totalled €44.6 billion in Q2 2014, reflecting a 30 percent rise year-on-year, and an increase of 11 percent on Q1 2014, according to the latest research from CBRE.

Aside from an exceptional Q4 2013, when a strong finish to the year led to the highest quarterly figure in Europe since Q4 2007, Q2 2013 is the largest investment total recorded since 2007.

France saw a significant increase in investment volumes with €6.9 billion of transactions in Q2 2014, up 82 percent on the previous quarter and double the level seen in Q2 2013. In line with the wider economic situation the French commercial real estate investment market has been relatively flat in recent years. However, Q4 2014 recorded the highest quarterly total since Q4 2011. The increase in H1 2014 was largely due to a small number of large lot size deals and the historically low cost of money coupled with rents at the bottom of the cycle.

Nicolas Verdillon, Executive Director, Capital Markets France, CBRE, commented: “The strong activity is a welcome return to larger volumes in France where investment had been lagging the rest of Europe mainly due to lack of product. Institutional investors from all major economies are currently active or getting ready to enter the market and there is a more positive outlook taking hold. Paris is an obvious choice in any international portfolio and with the CBD yields narrowing, investors are now turning to other established Paris sub-markets.”

In the UK, investors continued to be more active outside of Central London in the second quarter of 2014. Approximately 60 percent of total investment in the UK occurred outside the capital. In addition about €1 billion worth of transactions by foreign investors took place outside Central London in Q2 2014. This included ten transactions from Asian and Middle Eastern investors, one of which was for more than €200 million. Non-European capital has increasingly been spreading into regional UK cities since the bottom of the market in Q2 2009.

Jonathan Hull, Managing Director, EMEA Capital Markets, CBRE, commented: “The growing interest in regional UK cities such as Birmingham and Manchester is partly due to strong competition for limited investment product in Central London but also reflects increased confidence from investors. Buyers particularly from Asia and the Middle East are now more willing to explore options beyond London as long as they can still buy central locations with quality leases in place.”

Andrey Novikov, Director of Capital Markets, CBRE in Russia, said: “Investment in European commercial real estate continues its fast growth, setting up one record after another. Aside from the current geopolitical problems, investments in Russian commercial real estate could be 1,5 – 2 times larger compared to the existing situation. Nowadays, it would be fine if this indicator for the whole 2014 exceeds $3,5 billion, i.e. will achieve at least 50 percent of 2013’s volume. Investor interest to acquisitions is still here, but existing geopolitical problems make it more difficult to reach a compromise on pricing and, thus, increase the length of transactions. Nonetheless, unless oil prices decrease below $100 per barrel and GDP growth becomes negative, investors will continue their active search for good opportunities.”